Maybe he bumped his head, maybe he’s just being nice because of this (I’m flattered frankly). Either way, Mr. FireWillHeath talks positively about the ‘Blogle and about Auburn Football. Someone write this down. 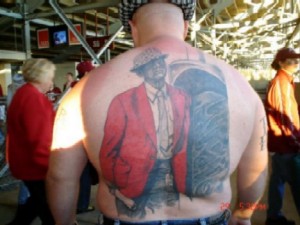 Well guys, when the WarBlogler is right, he sure is right. Maybe it only happens like once a decade, but it deserves mention, anyway.

Back before the season, our friend here at WarBlogle.com predicted via Tigers Corner that Auburn would fare better in 2009 than in 2008. He didn’t say they would BE better, mind you, only that the results would be better.

And it’s a fair point. Currently, Auburn is the talk of the SEC: 3-0 (and they’ll be 4-0 after Saturday — Ball St. sucks), and on the right side of an exciting 41-30 win over West Virginia. It’s the sort of win they never earned last season — last season the War Eagles faded down the stretch at pretty much every opportunity.

So why is Auburn faring better on the field this time around? From my chair I can identify two pretty obvious reasons:

• Gus Malzahn and the offensive resurrection. The obvious one, sure. In addition to scoring 30-plus points in three outings, the offensive output from a yardage standpoint has been fantastic. Saturday night was my first chance to watch Auburn play — watching Chris Todd thread the needle, seeing them make the most out of flawed offensive “stars” like Darvin Adams, it’s really something special, to the point that I could easily see someone seeking out Malzahn at the end of the season for a possible head-coaching position (but we won’t talk about that now).

(One of my favorite running features of the Malzahn era: the whole “give the ball to the nearest official as soon as the play ends” thing, which manifested itself in hilarious fashion after Adams’ go-ahead TD — he refused to celebrate with his teammates until he’d given the ref the ball. Hysterical.)

• They’re simply more fortunate this time around. So you’re saying Auburn is lucky? In a sense, sure I am. Does Auburn win Saturday night without 6 ghastly turnovers from West Virginia? Probably not.

But what’s so wrong with saying a team is lucky? Aren’t all good teams lucky on some level? Florida was lucky last season when Dont’a Hightower grabbed Tim Tebow’s facemask on a critical fourth down. LSU was lucky about a bazillion times in 2007. Florida was lucky to even be in the championship game in ’06. I could go on.

There’s another side to that coin, though. Bad teams make mistakes in critical situations. Good teams force them. That’s just the way football works, and it’s almost always the difference between winning and losing.

I maintain that we still don’t know just HOW good this Auburn team is, particularly with the balance of its SEC schedule still before it. But I think it’s incredibly fair to believe they’ll FARE better this fall.

‘Smarter Every Day’ Learns About the Eagle Flights

I am extremely proud of Auburn thus far. I admire their entire coaching staff tremendously. They have all come together in unity, and I like Malzahn’s approach where if its not working we try something else, unlike Auburn in the past when they were losing and kept doing the same thing. This is a vast improvement from years gone by. Coach Chizik is an intelligent, good man, and he knows what it takes to get Auburn where they need to be, but we all know there will be bumps in the road during this process. Friends The Chizik Nation has arrived and is coming up from from the Old Auburn Ashes!!!! WAR EAGLE!!!