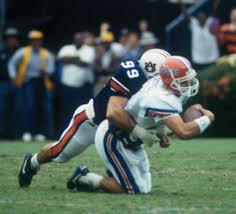 How I Remember It: I was eleven years old and I watched this game, one of the biggest wins in Auburn history, in the lap of luxury. That’s right, I had the pleasure of watching this one from the scholarship seats, also known as the “orange seats.” That meant free, unlimited hot-dogs, popcorn, cokes, and even a free game program.

I don’t remember much because I was probably in line at the concessions stand for most of the game, but I do distinctly remember watching the game winning kick sail through the uprights in the North end of the stadium.

What Really Happened: The Gators came into this game ranked #4 in the nation, and like most of Spurrier’s Florida teams, led the nation in about every offensive category. Terry’s Tigers were 6-0 and ranked #19 nationally. Even with an impressive record, nobody in the nation gave Auburn a chance.

The Danny Wuerffel-led Gators took an early 10-0 lead in the first quarter, and looked to extend the lead to 17 with a drive down to the Auburn 10-yard line. Then on 2nd-down, Weurffel was intercepted by Calvin Jackson, who ran it 95 yards for a touchdown. Instead of 17-0, the score was now 10-7. However, Florida continued to score as they took a 27-14 lead into halftime.

Auburn would totally change their gameplan and go to the air in the 2nd half, which actually opened up the running game as well. The Tigers took their first lead (28-27) with 13:40 left in the game, and with the help of another huge interception, the offense added another touchdown with a 9-yard reverse to Frank Sanders. The Gators would come right back and tie the game with an 81-yard drive ending in a touchdown and successful 2-point conversion.

Auburn’s next drive would be extended by a personal foul penalty against Florida to give Scott Etheridge a chance to win the game with a 41-yard field goal. As we all know, he made the kick to give Auburn a 38-35 lead with 1:21 left in the game.

The Tiger defense would stop the Gators one more time and seal the victory in one the greatest games in Jordan-Hare history.

Why did I pick this game? This game was huge to me at the time and still is today. Auburn wasn’t given any chance to win, but they showed they could play with the big boys and continued their undefeated season. Beating Florida with a field goal when they were ranked in the top 5, and considered a national title contender, easily puts this one in the list.

Fun Fact: Auburn beat the Gators the following season by a 3-point margin as well.

Play of the Game: Calvin Jackson’s interception turned the game around. The Gators could have been up by 17, but in one play were only up by 3.

Player of the Game: As always, win the game with a field goal and you are the man. This time it’s Scott Etheridge.

Quote of the Game: “This is the one reason I came to Auburn. This is old Auburn football, and I’m glad it’s back. This is the biggest win of my life.” -Thomas Bailey