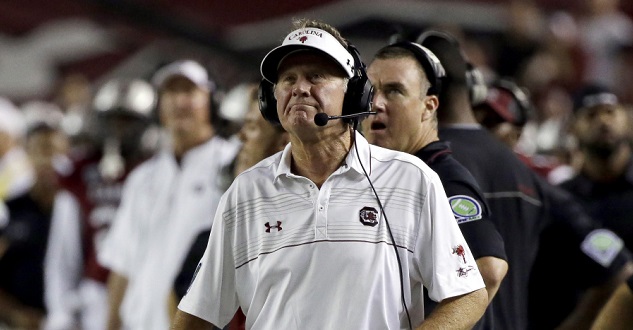 Brandi Mills (@BrandiCMills), commonly referred to as @bClickClack by her friends (and legions of fans), is a 2003 Media Arts graduate of the University of South Carolina and a huge Gamecock fans girl. For money, she works for TheBigSpur.com, the 247Sports South Carolina affiliate. She has a man crush on Steve Spurrier and cannot attend a Carolina game without her visor on. She also makes outstanding gameday jewelry which she sells here.

We want our defensive coordinator back.

2. What’s been one disappointment and one positive from South Carolina’s season so far?

Disappointment: Three losses. Positive: we won last week and the State Fair was there so I got gamecock football and drop zone in one day.

3. What’s the vibe on Spurrier? Are fans completely happy with him as the coach, or would some like to see him go to Florida when Muschamp gets a pink slip on his locker in a few weeks? What are your thoughts personally?

Spurrier isn’t the coach the fans are fussing about. I’m not ready to see him go.

4. If you could have Stephen Garcia on the team right now, would you take him?

5. Who are two generally unknown Cocks that Auburn fans should be worried about?

7. Who is your favorite Auburn Tiger of all time and why?

Cam Newton. He got paid and didn’t get caught.

Auburn in the playoffs. Carolina in the Belkie Bowl.

10. Do you have memories of your great-grandfather telling you stories of that one time South Carolina beat Auburn?

Short and to the point. Decent, I guess… She obviously hasn’t read any of your past ‘From the Other Sideline’ bits… Oh well.

Pretty smile and great sense of humor, but where’s the beef? She was either in a rush or just wants to “check the box like we did 2012 pre Malzahn when we had to do a little Dr. Phillin’. They’ve had a couple of injuries at key positions, but they have the ability to sling the ball downfield and we are certainly capable of our own mistakes, forced or otherwise. So no room for over-confidence now if ever.

Could her answers be any shorter?