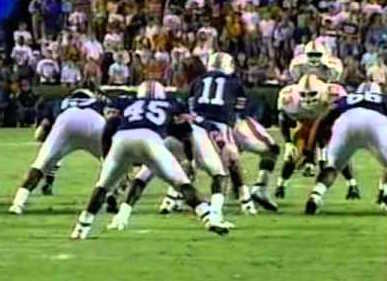 How I Remember It: I went to this game, but I don’t have any memories of the game (I was eight years old), but I do have a very vivid memory from just after the game. I was on my dad’s shoulders and we were filing through the concourse like cattle, and the crowd was chanting “It’s Great…To Be…An Auburn Tiger!” I was only eight, but even then I knew we had tied the game. I remember asking my dad why everybody was so happy because of a tie. He said something to the effect of “because it was a huge comeback.”

So that’s it…I couldn’t tell you one thing from the game, but the tie was apparently pretty huge.

What Really Happened: So yeah, the tie WAS, in fact, pretty huge. Auburn came into the game ranked #3 in the nation, Tennessee was 5th. Auburn was defending their 3rd consecutive SEC championship in an early SEC battle.

Down 26-9 in the 4th quarter, freshman quarterback Stan White led the Tigers to seventeen unanswered points. The final seven coming on an 11-yard touchdown pass with 1:56 left in the game.

As if that wasn’t enough for this tie to be pretty huge, following the Auburn touchdown, Tennessee drove down to the 14-yard line, and with 15 seconds left missed the winning field goal.

So yeah, Dad, twenty years later I now retract my question. I now understand why it was great to be an Auburn Tiger, even after a tie.

Fun Fact: Auburn and Tennessee shared the 1989 SEC championship, making this game even more important at the time. This was Tennessee’s second tie of the season, and coach Johnny Majors’s final tie as Tennessee’s head coach. Why did the NCAA ever allow tying anyway?

Why did I pick this game? There are plenty of reasons to put this one in the Top 30. It was a huge comeback against the #5 team in the nation, who also happened to be an SEC rival, and it kept Auburn in the hunt for their 4th consecutive SEC championship.

After getting reacquainted with this game, I believe that this one could probably be a little higher on the list. However, it’s still a tie, no matter how huge it was. There are still many good wins that can’t be trumped by a sister-kisser.

Play of the Game: Stan White’s 11-yard touchdown pass to Greg Taylor with 1:56 left in the game tied the game at 26.

Player of the Game: Stan White threw three touchdown passes, including the aforementioned.

Quotes of the Game: “There ain’t no damn fear in him [White]. He became a man tonight.”

“Number one, our best chance for winning was to tie it up, and then force Tennessee into throwing the football,” he said. “Little did I know they were going to march down the field and try a field goal. Number two, we played too hard to come away with a loss. And number three, these kids have won three straight [SEC] championships, and a loss might’ve knocked them out of it this year.” – Pat Dye