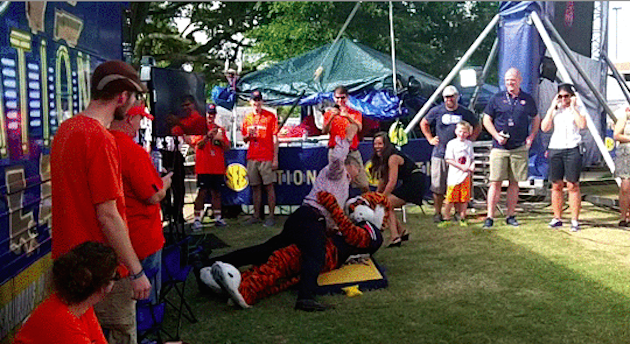 Bruce Pearl (and @BabyBlogle) took on SEC Nation’s Kaylee Hartung and later Aubie in cornhole on the set of SEC Nation as they visited Auburn for the Arkansas game this past weekend. After Aubie knocked away a few of Bruce’s shots, Bruce had had enough.

First, Bruce hit him with a 90 mph beanbag (my video kind of missed that as I was moving so that SEC Nation could get a good shot of the hog head that was roasting on set). Then, while Aubie was flat on his back, Bruce attacked. The crowd couldn’t see it so it was pretty quiet, which kind of made it awkward, but funny nonetheless.

And here’s the GIF of the good part. Feel free to use it in your Barn signature.