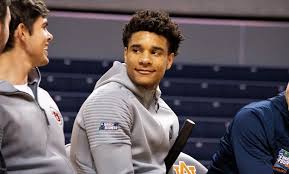 Happy Tuesday. Catch up on all of the Auburn stories you need to know here. There’s a lot of news out there, but we bring you the only news that matters. Enjoy.

– The QB battle looks to be far from over. Whoever ends up winning, they’ll have this reliable face to throw to, and this potential first round pick to protect them.

– Chuma Okeke withdrew from the NBA combine. Though that sounds like it could be good for Auburn, it’s probably just a formality due to his injury.

– Bruce Pearl narrowly missed on one high-profile grad transfer, but could still end up getting another.

– Speaking of new players, Auburn has a large statistical hole to fill. Bruce knows who will have to step up.

– Softball is going to the postseason. Catch up on their path to the National Championship here.

– Baseball still has a few questions to answer before the SEC Tournament. At the forefront are questions about the bullpen.

– The series against #7 Georgia was gut-wrenching. Here are highlights from the lone, exciting win.

– Men’s Golf is tearing it up at the Louisville Regional. Follow along with the teams and players here.