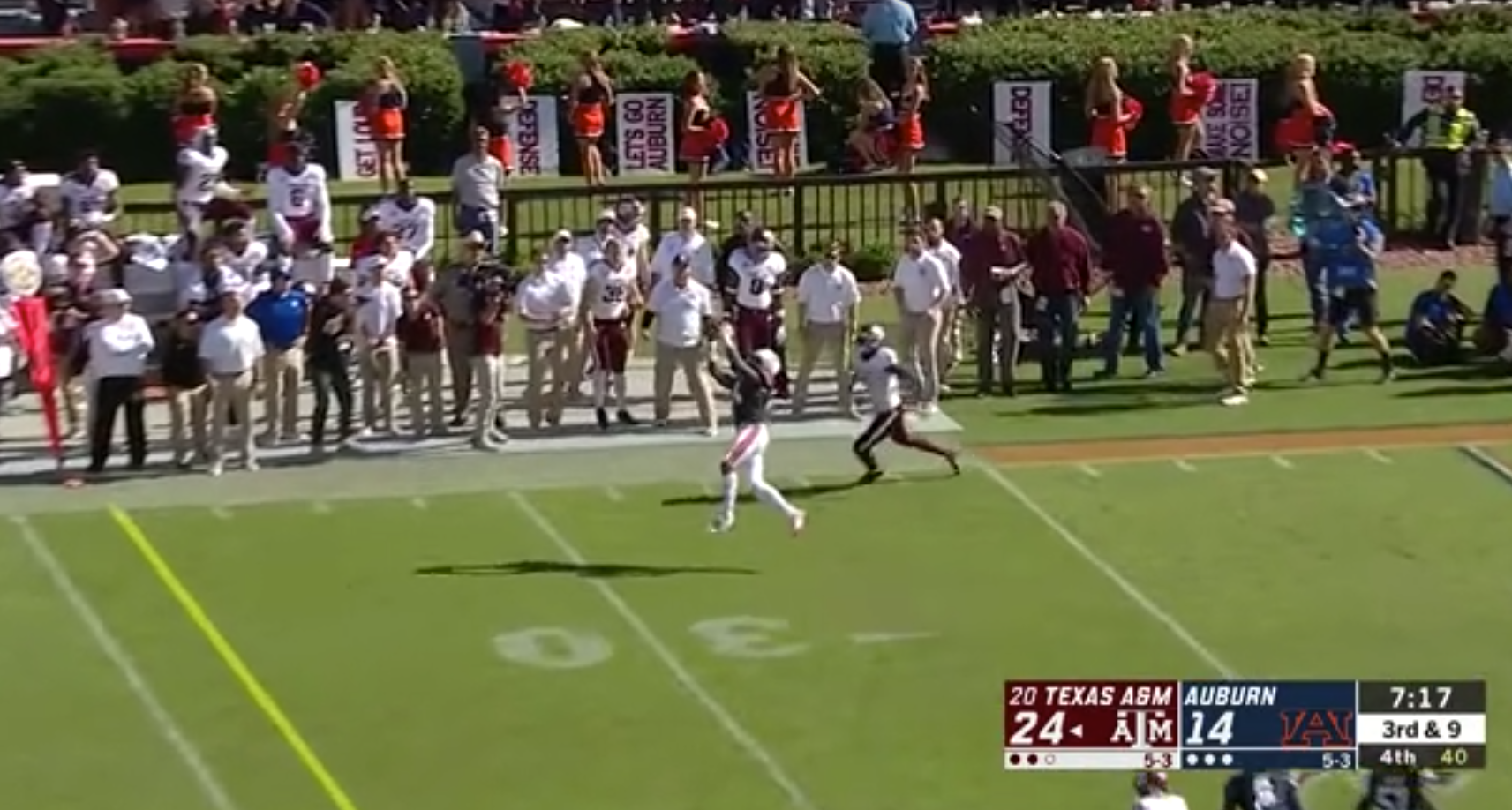 Welcome Back to It’s Pronounced GIF. It’s been a while and this whole offseason thing is killing me, so let’s do what any sane person would do…and talk about football until it comes back because this is an addiction and we all love it.

Allow me to paint a picture for you. As the 10-minute mark in the 4th quarter comes and goes, Auburn faces a 3rd and 16 deep in their own territory. Auburn has 15 rushing yards in the game. Everyone in Jordan Hare Stadium knows this ball is being punted away. Texas A&M is one of the best schools in the country at chewing clock. If Auburn is very lucky, they might get the ball back two more times. Traveon Williams is a problem in the run game, Kellen Mond’s threat to run is neutralizing any attempts by the Auburn defensive line to apply pressure. All Texas A&M must do to win this game is not turn the ball over, and not allow Auburn to make big plays on offense.

In the last 8 minutes, they would do both, and lose the game. Let’s go play by play.

8:06 – Texas A&M snaps the ball with 13 seconds left on the play clock and runs the ball again for no gain.

7:23  – Texas A&M commits their first major mistake. Auburn only rushes 4, Auburn’s DB’s are playing zone. Due to an excellent play by Noah Igbinoghene to bait the throw, and a poor decision by Kellen Mond, Auburn gets an interception.

The comeback has begun.

7:14 – Auburn comes out passing, and Stidham hits a drag route to Ryan Davis, who puts 2 Texas A&M defenders on skates and nearly gets a first down.

6:29 – Again Auburn goes to the air, Stidham to Darius Slayton. Stidham is 3/3 on this drive with fairly simple passes, but the anticipation on the last is very impressive.

6:17 – Auburn drops to pass a 4th time but this time it’s batted down. The clock stops. Auburn breathes.

6:12 – Auburn runs a simple inside zone, but where it might have been stuffed before, Texas A&M’s defense is now playing very far off the ball, and with late help from their LB’s, Whitlow converts the 3rd down. The clock runs.

5:58 – Stidham to Slayton, this time Beyond the sticks on a corner route. Texas A&M had slowed Auburn down a hair. Not anymore.

5:33 – Stidham to Slayton at the 2-yard line. Auburn is flying down the field. Stidham has not been off target yet. He reads the field deepest to shortest and sees that Slayton is there if he can fit it in. Let it not be said that Stidham is not Clutch.

5:19 – Auburn lines up in the heaviest set in the playbook with Chandler Cox at RB and gets those 2 yards. Touchdown.

5:14 – Auburn kicks off to Texas A&M. If they sustain a single drive, the game is effectively over.

3:05 – Traveon converts 3rd down. For a lot of teams this would be the dagger. Everyone is tired, but they’ll make one more stop.

2:31 – A&M drops to pass, and the rush causes Mond to fumble the ball. Dontavius Russell very nearly recovers it, but Texas A&M recovers it. For a lot of teams, that would have been the dagger. The Clock runs.

2:19 – Auburn makes the crucial stop against what looked like a screen pass. They’ll have one more shot at the football with 2 minutes remaining.

2:15 – Texas A&M punts the ball. Auburn elects to be tricky about the return by sending Christian Tutt back along with Ryan Davis. Ryan Davis sells the fake beautifully, and Tutt nearly gets a touchdown return, were it not for an ankle tackle by a desperate A&M defender. Auburn is on offense for the last time. Near their own 40-yard line.

2:04 – Stidham to Ryan Davis across the middle on a drag route. A&M is in prevent defense with everyone playing back in the secondary. All the corners are forcing everything inside first then worrying about the stop. What they didn’t count on was Ryan Davis breaking 3 tackles on the near hash mark and continuing to run for another 30+ yards. Anthony Schwartz actually misses his block because he’s too quick to get there, else this might have been a touchdown. Auburn is at the 12-yard line. A 46 yard gain.

1:47 – The level of trust between Stidham and Seth Williams on this fade route, Stidham’s placement and touch, and Seth’s sure hands and route running to get this separation all make this play work. It’s an incredibly difficult throw to make, across the field and in the corner of the endzone, but Stidham makes it. Touchdown Auburn.

The comeback is complete.

Auburn would go on to stop the last second desperation heave by Texas A&M as the defense played with the confidence of a team whose offense showed up right when it needed to.

This game was a testament to the best parts of Auburn football in 2018. Going forward from here, Seth Williams would be trusted as a member of the WR corps as a true freshman. Stidham regained the trust of the Auburn family amid questions of if he should be starting. The defense proved themselves with timely stops. Gus Malzahn proved for the 2nd time in 2018 that he could out coach a quality opponent.

Even with all the struggles Auburn faced in a season to forget, no one is likely to forget November 3rd, 2018 any time soon, and I’m willing to bet some people in the program are going to cite it as a turning point down the road.

So yeah, I got invited to the ESPYs…

Highlights of Auburn’s 30-17 Win Over Tennessee