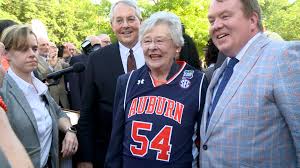 Happy Thursday Auburn fans. It’s not a huge news week, but there are always interesting tidbits of info you need to know. Catch up on everything here.

– The NFL Draft starts tonight in my hometown of Nashville. Where do you think former Auburn players will land?

– Auburn OC Kenny Dillingham spoke at length about Auburn’s offense. Most notably, he addressed questions about the QB race.

– Speaking of football, catch up with a new DB and learn more about a freshman RB looking to make an impact.

– Learn more about a dual-threat QB that committed to Auburn after the Spring game.

– The Basketball team celebrated their historic run to the Final Four with the Governor. It produced this gem of a video that everyone should watch.

– The next chance to continue the turnaround comes today against Vanderbilt. There’s a lot going on in Nashville this weekend.

– Even with the victory, see why coach Butch Thompson is still feeling down.

– Catch up with a former Auburn Pitcher making waves in the minor leagues. I feel bad for all the AA batters that have to face him now.

– The SEC Men’s Golf tournament is in full swing, see how Auburn fared in the first round. Keep up live here.

– I can’t believe the Equestrian ride is over. See how an #EquestrianSchool celebrates undefeated national champions.

Week 7 Predictions: The Spreads Are Low