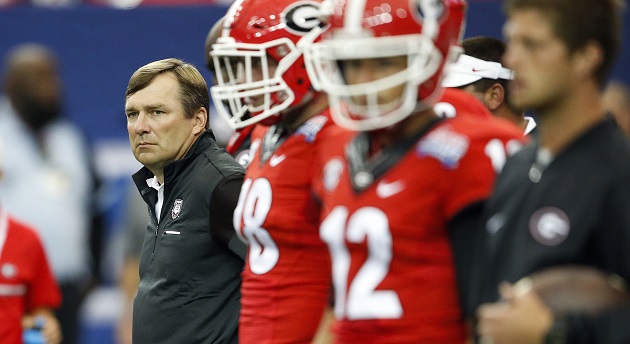 Cory Brinson from TheBlawgHouse.com is a college football writer and twitter personality (@TheBlawgHouse) that writes about Georgia football. Cory writes with an X’s and O’s perspective and, while a big Bulldog fan, still writes using the facts of the game, not opinions (his words). You may remember him from 2011 when he was part of one of the most commented-on posts ever. I have his email address if you want it.

1. What is a Georgia fan’s thoughts of Auburn football at this exact moment?

Our thoughts on Auburn are that they’re the next opponent on our schedule. You see, unlike previous years, Kirby even has us fans bought into the process. Auburn is a faceless opponent that we’re going to go out and try and beat the will out of and empty Jordan-Hare by halftime.

2. Do you cut Kirby Smart’s hair? If so, you’re terrible.

Do you pick out Gus’ visor, vest, turtleneck combo every game? Speaking of which, I bet Nike could put together some better coaches’ gear for you guys. Oh, wait, you guys own stock in Under Armour… how is that working out as a long term investment?

3. Is Georgia the best team in the nation? Why?

Because we’ve dominated every opponent that’s stepped on the field against us – including the #3 team in the nation. And while that was a 1-point win… why don’t you check out what ND has done against every other defense not named Georgia and let me know the answer.

Gotta love the match-up of Georgia’s front 7 on defense against that banged-up Auburn OL. Georgia not only dominates with their interior DL, but they rotate 8-9 guys per game. Combine that with the speed and sheer nastiness of our linebacking corp, and thats a recipe for disaster.

On the other side, anytime a freshman QB is coming into an SEC stadium as a visitor, you have to think crowd noise plays a factor. Except… Jake Fromm has showed he’s no ordinary freshman and has handled a few hostile environments… oh, and, this.

5. Name two unknown Dawgs that Auburn fans should look out for and why?

A guy that is coming back for this game is LB Natrez Patrick. He’s been on a 4 game hiatus due to his stress relief practices, but he’s fresh, he’s mean and he’s hungry. I expect a big game from him and our ILB group.

Another one to watch is freshman D’Andre Swift. While Chubb and Michel get the headlines (and rightfully so), Swift is the next in line to become one of Georgia’s great running backs. He’s fast (check the name), he’s powerful (ask Florida’s Chauncey Gardner), and he’s a match-up terror in the pass game. He’s been a go-to for big yards out of the backfield.

I mean, scare is a pretty intense word. I don’t think anyone with a “G” on their helmet or chest is scared of anyone from Auburn.

But, if I had to choose 2, it would probably be Kerryon Johnson – dude is a horse, but if his pitch-count gets high, he gets unproductive quick – and Aubie – that thing is creepy AF.

Georgia’s OL vs. Auburn’s front 7. If Georgia has success in the running game and can control the LOS, it is going to be a long day for the War Tigers.

Auburn will probably take another L from big brother Bama, and end up 8-4 and head to the Belk Bowl or some random bowl like that. Maybe Outback? I don’t know, I haven’t really had to concern myself with those bowls this year, so I haven’t looked at who gets first pick in those lower-tier bowls.

As for Georgia, well, this is the only game that matters. I know you guys are probably trying to figure out spending New Years in Charlotte or Birmingham, or whatever, but we’re focused on beating Auburn because that’s all that matters.

10. Will you be coming to Auburn this weekend? If so, where do you want to fight meetup?

Oh, no. Your nearest airport is 2 hours away (unless a plane can just land in nearby cow pastures?) so I won’t be making the trip. However, I am thoroughly looking forward to you defending Gus to all of your Twitter followers and keeping the Gus Bus rolling in Auburn.

Sometimes, you have to wonder if someone is just a total d#ck naturally or has to actually work at it. I think Cory Brinson is both.

I think I know that guy- he’s a cookie cutter Ga fan. Annually delusional but more so this year given the Swiss cheese consistency of their (til now) schedule.

No fan base, in any sport at any level, is better at telling you how good they are relative to their hardware.

I found myself both, laughing at this guy and feeling sorry for him.

That’s exactly how I feel about Auburn fans on a consistent basis.

The only difference is…one of us is warranted in those feelings and the other is part of the delusional “dawg” fan base.

When I see you having Gus Malzahn on your sidelines and Kirby Smart on our’s, the feelings of feeling sorry are definitely warranted.

You are exactly like every other Georgia fan who can’t handle being ranked #1.

You’re like every other Auburn fan that can’t handle us being ranked #1, either.

Cory,
I was on the 43 yard line of U of Phoenix stadium when Gus won a Natty at Auburn. Where were you sitting when Kirby won his Natty at UGA?
How infuriating is it to have every one of your rivals: UT, GT, AU, Clemson, and UF (x3) having a more recent Championship than you?
UGA fans = Bama fans minus trophies to back up the argument.
Also, we know you’re well aware of which seed goes to Belk and Gator, since you’ve lived there for 10 years.

You do realize Kirby isn’t even through his 2nd season, and has us ranked #1?

I know how bitter of a pill that must be considering all those 7/8 year seasons the past 4 years.

But keep clinging to that Cam year, I’m sure it makes losing that much a little bit easier to swallow.

Gus actually went to the National Championship game in his first year. A #1 in week 10 is worth exactly nothing. Don’t forget MSU was ranked #1 this late a couple years ago, what did that get them?

I wouldn’t order your 2017 replica National Championship ring quite yet, chicken counter. But if you do, you could put it with the last 35 you got.

Lane straight up schooled this dude. Lol Can’t even tell the difference in bragging and stating something. Bragging would be what you said about what Kirby has done and how bitter it must be. X’s and O’s…lmao UGA hasn’t even played anyone but a notre dame team that hadn’t even got their feet wet. No title for UGA this year. Watch and see. Not saying Auburn will either….my pick is bama. But UGA will once again come up short. At least they made it farther than usual, but with the state of the s.e.c east, a halfway decent team could win that division. When you got Kentucky as the 2nd best team….that says it all.

UGA has never even played in an NC game to lose. Keep trying Cory. Hey try playing “we kick bad people off our team, so we win the Piety NC every year card”, that’s my favorite.

PS Auburn is closer to ATL airport than Athens is. They didn’t even bother to build an interstate to Athens.

Maybe shoulda put a face on this opponent….hope we meet again in a few weeks. War damn Eagle

Nice score prediction, Cory, it was pretty close, and backwards.

Cory at least come back and take it like the man your mother is.

Cory, we understand you have a job to do and you did it. No hard feelings. UGA is a good team and the outcome of the game surprised almost everyone except a few AU diehards (like War Blogle). I hope the rematch comes quickly and that we can enjoy a more substantive discussion leading up to our next matchup. AU fans would be foolish to take a rematch lightly and I would not expect the same outcome at a neutral location. As you know, we have a bit of a hill to climb to make that happen but Saturday’s game with you showed us who we are and that we have a shot. Let’s see what happens. Good luck with UK.