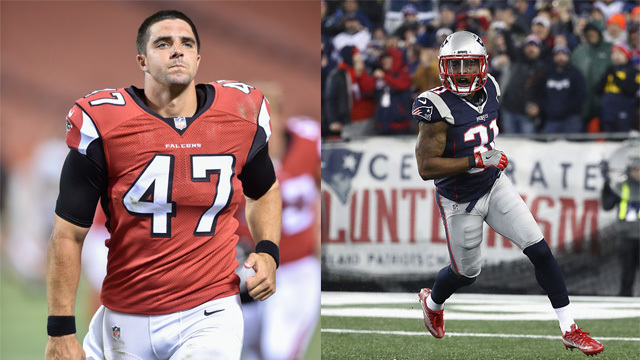 It’s that time of year again: the Super Bowl is here. The culmination of the NFL regular season has arrived and football fans across the globe will be excited to watch one of the greatest sporting events of the year.

This season, Tom Brady and the New England Patriots will be taking on the Atlanta Falcons at NRG Stadium in Houston and we’re delighted to say that three former Auburn college players will be competing in this year’s event – more than every program apart from Alabama.

With Josh Harris playing for the Falcons and Jonathan Jones and Brandon King flying the flag for New England, one thing is for sure: Auburn will win no matter who lifts the Vince Lombardi Trophy. In this article, we’ve taken a look at our three former athletes and profiled their respective careers ahead of what could be one of the best Super Bowl contests in recent history.

Josh Harris (Long snapper)
Harris joined the Auburn programme back in 2007 after attending a tryout for walk-ons on his first day on campus – and the rest is history. The Tigers star redshirted and served as a backup for the first two years of his career before maturing into Auburn’s snapper for punts, field goals and extra points in 2009.

In 2011, he delivered the snap for Wes Byrum’s game-winning field goal in the National Championship game against Oregon; a moment that will live long in the memory for Auburn followers. If called upon, the ever-reliable Harris will be ready to help Atlanta in their bid to win a first Super Bowl title, and his personal journey from tryout to college championship to NFL title will live with him forever.

Jonathan Jones (Cornerback)
Meanwhile, Jones will be looking to make an impact on the other side of the field as the Patriots seek a fifth Super Bowl ring. New England, priced at 8/13 to win in the bet365 NFL betting odds, have a plethora of talent in their secondary but Jones could prove useful in Matt Patricia’s unique defensive scheme.

Two years ago, Malcom Butler was a nobody. His interception in the final stages of the victory over the Seattle Seahawks transformed him into a superstar overnight. Jones was an undrafted rookie coming out of college but if anybody can take him to the next level, it is Bill Belichick. His Week 14 play against the Baltimore Ravens led to a Patriots safety and the former Auburn man could be a pivotal figure on the biggest stage of them all.

Brandon King (Safety)
Truth be told, Brandon King suits the Patriots down to the ground. Belichick has always preferred those ‘hybrid’ safeties that can play deep or come up and fill in as a linebacker and that is exactly what King has in his locker. Since joining the New England roster in 2015, King has made 22 tackles – forcing one fumble against the Buffalo Bills last season.

The former Auburn Tigers man could step up and make a game changing play if needed; whether that is on defense or special teams. In 2015, he finished second on the Patriots for most special teams tackles and his ability to pin opposing returners downfield could prove crucial in the battle for field position at NRG Stadium on February 5th. Watch this space; King could pop up with a big moment or two.

Jason Smith Becomes Defensive Back, Ready to Serve Wherever

Auburn’s March Towards March Madness in 2019