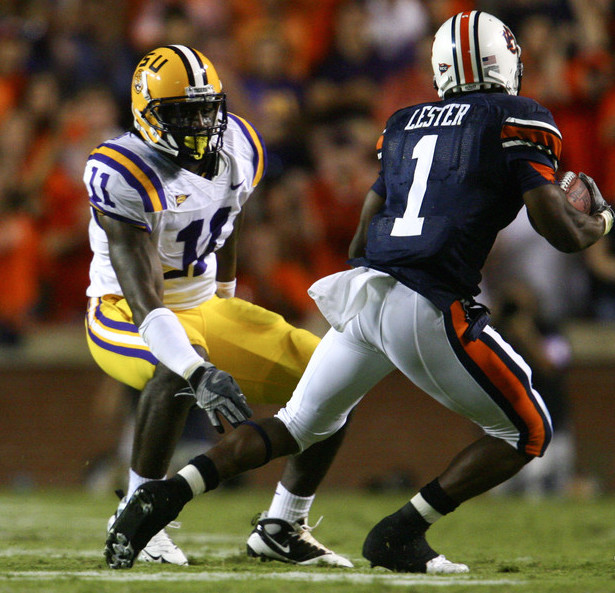 How I Remember It: ESPN’s College Gameday was broadcasting from campus so there was some major hype around this game. Regardless of the hype, I remember wanting to beat LSU more than anything that year because of the way the previous year’s game ended.

During the game, I remember LSU switching between two young quarterbacks until one happened upon a concussion. I also remember tight end turned defensive end, Gabe McKenzie, ironically scoring a touchdown on the defensive side of the ball. Of course, the last thing I remember is Les Miles and his luck ripping the hearts of Auburn fans’ chests for the second year in a row with a late touchdown just after Auburn had taken the lead.

What Really Happened: Both teams came into this early SEC battle without a loss. Auburn was ranked #10. LSU was #6. As remembered, College Gameday was on campus and the hype was huge. Boy, if they just knew how these two teams would end the season.

LSU kicked a field goal late in the first quarter, but that’s all the Purple Tigers would muster in the first half. Ben Tate scored on a 1-yard run halfway through the 2nd quarter. Auburn then took control of the game when Gabe McKenzie intercepted a terribly thrown pass by LSU QB Jarrett Lee and returned it for a touchdown. Auburn took a 14-3 lead into halftime.

LSU would do the only scoring in the 3rd quarter as they threw two touchdown passes: one by Lee and one as part of a halfback pass. The bad Tigers had a 17-14 lead going to the 4th quarter.

That lead would be extended to 20-14 after another field goal with eight minutes left the game, but the good Tigers drove back down the field. The drive ended with a touchdown pass from Chris Todd to Robert Dunn to give Auburn a 21-20 lead with 6 minutes to play.

I can’t talk about the next part of the game too much without getting nauseous, but you know what happened. LSU drove down, and threw a touchdown pass with one minute to play. They missed the 2-point conversion and the game ended with LSU winning 26-21.

Fun Fact: Gabe McKenzie’s interception touchdown was one of his three as an Auburn Tiger. His other two were from the offensive side of the ball.

Why did I pick this game? When I began this countdown, I swore to myself that I would not include any games from 1998 or 2008. Why? Look at the records. But if you look at just this game, and forget about what happened later that season, then this was a really good, and typical, Auburn-LSU game. The ending didn’t turn out like Auburn fan’s wanted, but overall, the game was definitely the one of the most exciting of the season.

Play of the Game: Chris Todd’s 15-yard touchdown pass in the back of the endzone to Robert Dunn to give Auburn the 21-20 lead with 6:40 left in in the game.

Player of the Game: No one really stood out, but Chris Todd threw for 250 yards and a touchdown, so he takes the honor.

Quote of the Game: “It was real exciting. There’s nothing like it. The adrenaline rush, playing on that stage was awesome. You’d like to win, but it came down to the end, and those are the type of games you like to play in.” – Chris Todd

Highlights of Auburn’s 53-0 Win Over Liberty