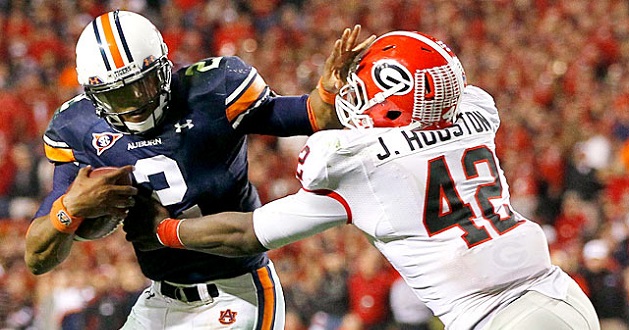 This was originally posted in 2011, but has been updated with a recent game that deserves a spot.

The Auburn-Georgia game, the Deep South’s Oldest Rivalry, has had plenty of moments that make it one of the more exciting rivalries in the country. Fortunately, most of the moments from the last decade are on YouTube. Let’s take a walk down memory lane…

Who remembers the beat down of ’99? I remember sitting on my couch just laughing as Ben Leard and Ronney Daniels ran all over the Bulldogs. It was like Ben Leard hated Georgia or something (note: he does). We start off with a very long, but very positive look at the game, with almost all of Auburn’s offensive snaps.

So after 13 minutes of Auburn goodness, we have to come back down to Earth with the 2002 game and the play that won Georgia their first SEC East title in years, while ripping my heart out of my chest as a student watching mere feet away.

The 1999 game was a beatdown, but the 2004 game was all out domination. For whatever reason, there aren’t many highlights of the game on the ‘Tube, other than that time Junior Rosegreen tried his best to fuse his helmet with Reggie Brown’s by shear force. Brown was okay, dont give me crap about making light of the hit.

Three years after my heart was ripped from my chest, the favor was returned in probably my favorite moment of any Auburn-Georgia game. The best part is hearing the Auburn crowd take over as the souls were removed from those that bark.

The 2007 game is probably one of the more infuriating events of my lifetime. Was it because of the football game? No. It was because of Soulja Boy. Every time I watch this I get more angry. The only good part is that after all that dancing and jumping around, the kicker kicks the ball out of bounds. Doh. Oh, and #19 at the 0:25 mark, you’re so gangsta.

Here’s a fan’s view that shows you the truly fabulous choreographed moves that I witnessed first hand. Turn your speakers down.

Sadly, there are no real highlights of 2010’s game, instead we have nothing but whiny videos about Auburn’s “dirty play.”

Here’s a little pregame and postgame footage courtesy of AuburnSports.com as well.

Following two years of strife, a much better Auburn team hosted the Bulldogs at home for the 2nd year in a row. As expected, Auburn took an early and comfortable lead, but after a few late scoring drives, the Bulldogs took a one point lead when Aaron Murray score. However, the 2nd greatest play that I have ever witnessed happened just a few moments later to give Auburn the win.

Schedule for Auburn in 2016 Summer Olympics

Cadillac, Simmons, & Others in Auburn this Weekend

Yep, I guess a combined score of 83-7 will do that to an Auburn fan. Payback for Fairley trying paralyze Murray.