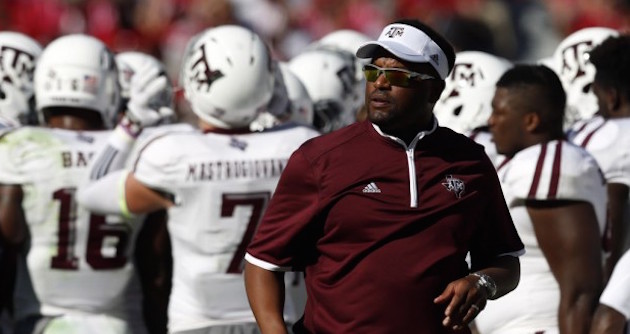 Olin Buchanan (@olinbuchanan) is a columnist/assignments editor for TexAgs.com. He previously worked as a Texas A&M beat writer for the Bryan-College Station Eagle and the Austin American-Statesman. He also was a national CFB writer for Rivals.com and Yahoo! Sports. More importantly, he’s a making his 4th appearance on the Other Sideline, which is probably at the top of his resume.

1. What is a Texas A&M’s first thought about Auburn football right now?

The same as anybody else outside of Tuscaloosa, Aggies view Auburn as a powerhouse that’s very much a national championship contender. Aggies see Auburn as a physical team that can beat you up, but also has the explosiveness to beat you on big plays. I think most Aggies already view Gus Malzahn as one of the best coaches in the game.

2. What happened to Kenny Hill? Was this a case of premature nicknaming? Any idea why he’s suspended?

The nicknaming was premature, but no fault of Hill’s. After the South Carolina game a lot of jubilant Aggies were suggesting nicknames for him on social media. He was asked about it in the next week’s press conference and said he didn’t need a nickname, but did like one suggestion of “Kenny Trill.” It took off from there. He began to struggle against Mississippi State, but his receivers also dropped between 10 and 15 passes (depending on who’s counting). The offensive line did not perform well against Ole Miss or Alabama. So, Hill didn’t play well in those games, but very few on offense did, either.

There has been no official word on the suspension. Of course, there are rumors and speculation. He’s been suspended before an alcohol-related arrest. Suffice it to say it has something to do with off-field behavior.

3. Following three straight losses and an uninspiring win over UL-Monroe, are the natives beginning to get restless?

Remember the final year of Gene Chizik? Well, it’s not quite that bad yet, but it’s getting there. Kevin Sumlin is still popular, but frustrated Aggies are aiming their ire at Offensive Coordinator Jake Spatival and Defensive Coordinator Mark Snyder.

4. Do you believe the AD jumped he gun on throwing the bank at Kevin Sumlin so early … and considering that Manziel guy?

Not really. Other college programs and NFL teams had expressed some interest in Sumlin. Hey, they thought he was the guy to rebuild the program before they knew what they had with that Manziel guy. If you still feel he’s the guy you do what you have to do to keep him. A&M has decided they want to play at the $100 tables with Alabama, Auburn and LSU, so you do what you have to do. That’s just how it is in college football today.

5. Speaking of Manziel, what would Texas A&M’s record be with him in the lineup?

A&M might have another win or two with Manziel. He was that good. Also, he was such a great leader that players probably wouldn’t have been dropping so many passes at Mississippi State or blocking so poorly against Ole Miss or Alabama. I don’t think he could have saved them in that blowout at Tuscaloosa. Maybe he could have made a difference in the other games. But could they have Mike Evans and Jake Matthews back, too?

6. Who are the two unheralded Aggies that Auburn fans should be worried about?

Unheralded? I don’t know that if includes true freshmen. If it does then receiver Speedy Noil is a big play threat who has emerged as A&M’s best offensive player. Likewise, freshman defensive end Myles Garrett is the best defensive player. He has 11 sacks, though seven have come against SMU and ULM. He needs to show he can be effective against everybody.

A&M could have an edge with their receivers – Noil, Malcome Kennedy, Josh Reynolds – against Auburn’s secondary, which has given up big plays. But freshman quarterback Kyle Allen may not be able to capitalize.

8. What is your analysis and prediction for this game?

Frankly, I haven’t seen anything in the last four games that would make me believe A&M could beat Auburn. But then, I thought there was no way Florida would be Georgia, so there you go. Auburn has given up at least 31 points in each of the past three games, so A&M can hope to get some big plays early and build confidence.

But by the same token, A&M has been torched in its last three SEC games. And Auburn has the experienced quarterback. Also, Auburn has those big-play receivers going against a secondary that has given up a lot of big plays. It doesn’t look good for the Aggies.

9. Where will Auburn and Texas A&M end up this season?

I think A&M still has a chance to beat Missouri in College Station. So, seven wins is certainly possible. You’d have to think the Aggies will be big underdogs against Auburn and LSU. As far as Auburn goes … I think they finish second in the SEC West and gets into the playoff. I think Auburn wins out.

10. I’ve been told that Aggie fans are nice, like scary nice. I experienced the same type of fans in Manhattan, Kn., earlier this year. Is this a thing out that way? Are we being punk’d?

No, A&M has one of the most cordial fan bases you’ll find. As long as you don’t criticize their traditions and show common courtesy, Aggies will treat you well. They enjoy the game and the atmosphere. Of course, there are knuckleheads everywhere, but by and large Aggies are a welcoming group. They’d rather celebrate their team than denigrate another team. Unless, it is Texas, of course.

Great stuff. As expected. This writer demonstrates a great knowledge of the game, his team and other teams as well. Nice reference to the last Chizik year. When we were walking around with no clothes on.