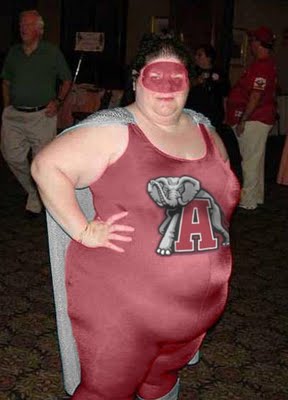 Here’s the best reason that should’ve been an INT for Patrick Peterson in the fourth quarter on Saturday in Tuscaloosa; so everybody will shut the hell up.

The prevailing story on Sunday should’ve been the tenacity of the battle between LSU & Alabama, about Alabama’s ability to repeat as SEC West champs (and clinching the deal well before the final week of the season), about Julio Jones redeeming himself from a mostly forgettable season (capped off by that sequence where he forgot to take himself out & cost his team a chance at a touchdown) with an extraordinary effort for the game-winning touchdown.

OK, so the SEC helped us get here, obviously — by showing a willingness to publicly reprimand, then suspend, an officiating crew for some mistakes (the kind that happen all the time everywhere, by the way) basically opened the door for a-holes like Lane Kiffin and Dan Mullen to run their mouths. Eventually, that forced the SEC to institute this silly “zero-tolerance” policy … which has only drawn more attention to the whole issue.

(Note: To the credit of Les Miles & LSU’s program, their guys took the high road consistently. Yet another way LSU is superior to Tennessee.)

But the truth is also this: probably 95 percent of the time, the officials get the call right. Replay will exonerate them more often than it doesn’t. Furthermore, have you ever been around a group of officials? They’re utterly obsessed with getting calls right and knowing the rules — missed calls eat at them more than anyone realizes. Referees want more than anything to fade into the background, and not be the story of the game.

Is it possible that one referee, with an affection for one particular team, might allow his feelings to affect his job? Possibly. Is it conceivable that a group of officials involve themselves in some sort of over-arching conspiracy to swing games in favor of one team or the other? I suppose. It’s also possible that aliens from “The Fourth Kind” are affecting the action, also.

Which brings us back to LSU-Bama. In the fourth quarter, here’s how many yards LSU’s offense managed: 9. Here’s how many first downs they managed during that same time period: 0. They were about as likely to score off that INT as I am to score with Mila Kunis. (Note: This seems like a good time to break out a photo of her. Just for better illustration.)

At the end, I say you’re still looking at Alabama as your 2009 SEC West champs. No amount of kvetching about officiating will change that.

I liked this article the first time I read it http://sportsillustrated.cnn.com/2009/writers/andy_staples/11/07/lsu.alabama/index.html
But seriously the point is well made.

This one is better: http://thenationalchampionshipissue.blogspot.com/2009/11/magical-yellow-flags-look-at-penalties.html

Kind of like the impossibility of Tennessee driving for a TD & then for a game winning FG against the vaunted Bama defense in the 4th quarter…Come on Will, anything can happen at any point in ANY football game.

And the fact that bad calls happen in every game does not change the fact that the int call AND, MORE IMPORTANTLY, the instant replay review were inexplicably wrong. And obviously so. I personally am glad they got the call wrong b/c I had UAT -7’…nonetheless I was floored that they didn’t reverse the call. I don’t believe in any conspiracies ever, but I do know that these particular refs in this particular game for whatever reason blew a very clear interception call…TWICE.