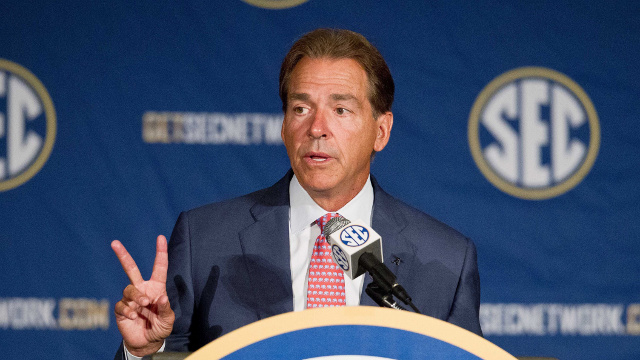 As exciting as last week was for watching games, it was equally as bad for my predictions. Seriously, I got two games right. Auburn and Georgia. That’s it. I’m pretty sure that’s the worst I’ve done in 7 years of picking. Time to get back on track, but I’m making picks like it don’t matter.

UL-Monroe at Kentucky – Guys, Kentucky is 4-1, and the one loss was in triple overtime at Florida. Now they’ll probably lose their last 7 games, but they’ll go to 5-1 this week.

Georgia at Missouri – This game just screams SEC East, doesn’t it? I mean, yeah, they’re both SEC East teams, but what I mean is that they are both fine, willing, and able teams that could make it to Atlanta, but they’ve also got things like a loss to South Carolina or a loss to Indiana in them. You just never know what’s going to show up. I know Georgia is the better team, but I just don’t know. I guess the DWAGS win.

UT-Chattanooga at Tennessee – Mocs and Vols. Now that I look at it, Tennessee hasn’t beaten anybody. Yeah, they had a shot at Georgia and Florida, but nope. They’re 2-3. Maybe next year. Chattanooga though.

Alabama at Arkansas – Uh oh… Arkansas don’t seem too bad, y’all, and Nick Saban ain’t exactly on a hot streak right now. He’s 4-3 out of the last 7 Tide games. And his teams are never one to recover after a loss. You see, they win champeenships at Bama, and when it’s out, they clock out. Arkansas smells blood. They can run, they can score points. Tide’s reeling. Yeah, I think I’m gonna do it. Hawgs win.

Charleston Southern at Vanderbilt – Vandy has one win on the season and it came after UMass basically missed an extra point at the end of the game, but I had no idea Charleston Southern was a football team, so I’m going to go with the Commodores.

LSU at Florida – Les Miles thinks its unfair that he has to play Florida every year. You think he cares this year? I mean Florida’s terrible, but LSU has bigger problems. This one is at the Swamp which is not playing at Baton Rouge at night, but wait, that’s not exactly that hard anymore either is it?

Florida has been bad for a while and looks to still be floundering. LSU has actually looked competent this season. I think they’ll win big.

Ole Miss at Texas A&M – For whatever reason, Mississippi State’s win over Texas A&M seems to be getting a little bit more praise and hype than Ole Miss’s win over Alabama, at least from what I’ve seen. I mean, Texas A&M has ridden the coattails of a blowout win over a below average South Carolina, and were finally exposed. But Ole Miss beat the #1 team in the nation. I saw all that to say this. Texas A&M will beat Ole Miss in a late game in College Station. Sorry, Rebs, but it’s happening.

Auburn at Mississippi State – Check my game preview later for the score prediction. SPOILER ALERT: CLANGA is all hype.

Oklahoma at Texas – I’m only putting this game here because of the names. Oklahoma is virtually out after their loss to TCU and Texas is terrible, but this always a game you pay attention to, I guess. Texas somehow blew out the Sooners last year, but it’s not happening this year. Even though I love Matthew McConaughey.

Oregon at UCLA – Oregon’s out, but UCLA lost early enough that they could maybe move back in the playoff as the Pac-12 champ. I mean, it won’t matter, but it could happen. Arizona exposed the Ducks last week, and UCLA isn’t terrible. The Bruins will win.

Still think Georgia wins now that Gurley is out?

Yep. Gurley only played half the time anyay and was good for a highlight or two, but I honestly don’t think he ran the game.