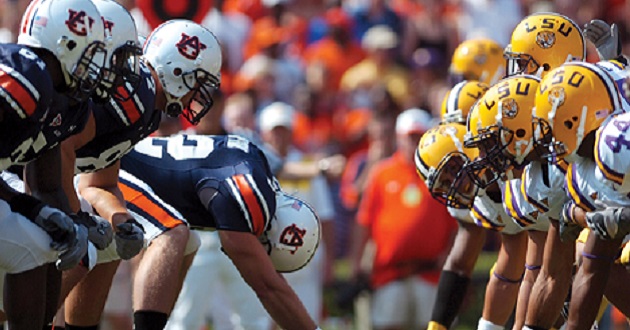 Had it not been for me giving Michigan any credit, I would have had a perfect pick last week. Oh well, at least I got all of the SEC games right. And that’s all that really matters in this world. This week is a little tougher. There are ranked-on-ranked games out the ying-yang. Let’s do this.

Vanderbilt at Georgia – Hey look, Georgia is playing a day game again. Seriously, it’s like every game. It’s sunny and bright and their student section is half full. That’s how I picture Georgia. You know how I picture Vandy? Losing.

Florida at Tennessee – It’s Peyton Manning and Danny Wuerffel. Actually, it’s that one guy at Florida and that other guy at Tennessee. It’s the game to decide the East. Well, as weird as things are over there, it really could be. In real football today, Florida is shaky at best. Tennessee can be, and they still lose games, but they sort of look competent. And it’s at their place. Tennessee big.

Kentucky really might have a chance in this one. The Gamecocks are probably close to packing it in, and there’s a little excitement in Lexington. They won’t lose to Kentucky will they? Uhhh, I guess not.

Alabama at Ole Miss – Come on, everybody. Let’s make this a huge game. Gameday’s in town. Ole Miss has beaten nobody, but they’re GOOD. They’re gonna be a real test for Alabama. Get ready, this Tide team is going to struggle against these upstart Rebels.

No they won’t… at all. But people are hyping this game so much that it’s going to look like a big win. It’s Alabama beating Ole Miss. There’s nothing big about that.

Texas A&M at Mississippi State – This one feels like a big ol’ matchup of teams that have hit other teams just at the right time. Texas A&M whooped South Carolina when everybody still thought the Gamecocks were good. Mississippi State whooped LSU, before almost blowing it, before we all realize that this is the worst LSU team in a while. One is going to lose and start their fall to about where they should be. One will ride the hype until they play an elite team.

The game is in Starkville, which will be a slight advantage to the Bulldogs, I guess, but the Aggies have already won on the road in bigger venues. I’m going with them.

Arizona State at USC – Arizona State was in Tim Brando’s top 5 last week. He called their game against UCLA. UCLA scored 62 points at Arizona State. Maybe he’ll change his ranking since he saw it in person. Now the Sun Devils travel to take on the other team for Los Angeles. It won’t go much differently.

Stanford at Notre Dame – I really don’t have a clue on this one. Stanford lost to USC in a close one, but they’ve only given up 13 points at most in games this year. Notre Dame is still Notre Dame until they prove otherwise, 4-0 record or not. With the 2012 National Championship debacle still fresh in my mind, I’m going with the Cardinal.

I agree with the “Big Game” theory in Oxford. Why is this such a big game? Bama wins going away. All the media masterminds are in Mississippi this weekend. I know I look through biased eyes, but why is the game at Jordan-Hare getting next to no attention? It seems to me the bigger game is A&M and Miss State. That being said it would be nice to squash both of the Mississippi teams hopes at get them both when they are undefeated, I just don’t think that’s a realistic scenario. Anyone have any corndogs? I’m hungry.

Honestly I think it is because of Ole Miss’ defense. They are pretty solid and will keep them in the game for a while. However Bo Wallace is consistently inconsistent and that will be their undoing.

it’s a lot of fun to go back to this and see people’s predictions, especially after such a crazy weekend