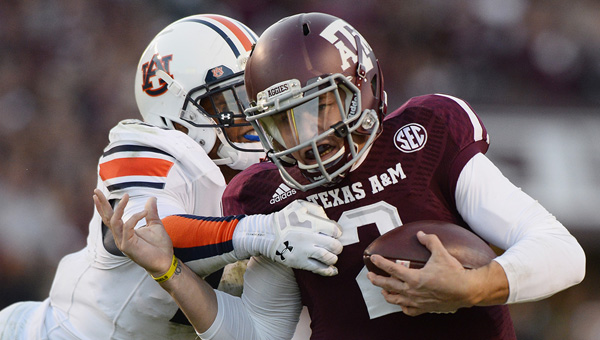 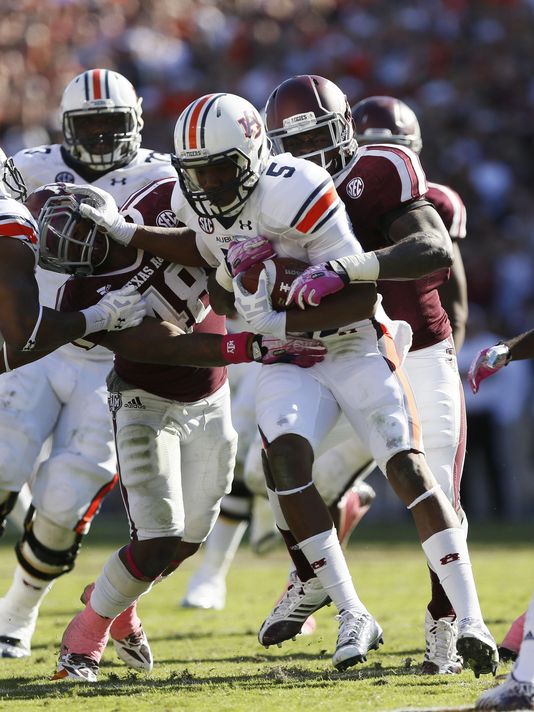 I woke up Saturday morning feeling achy and rundown. I imagine it’s what Johnny Manziel felt like on Sunday morning. The only difference was that mine was induced by some illness and Manziel’s was due to Dee Ford.

It was the first game this season that I have watched on television, and I was okay with that. That was until I remembered that Gary and Verne were calling the game on CBS. I know it’s just the social norm to hate them now, and it’s easy to beat up on the old guy who doesn’t know how to pronounce a name that wasn’t common in the 1950’s and the yankee that sometimes sounds as if he thinks he invented football, but all of the feelings an Auburn fan has towards their analysis are warranted.

The whole game was analyzed in a tone as if any second Manziel was going to turn it on and blowout Auburn. Every Texas A&M touchdown was “magical” and “amazing.” Every description of an Auburn touchdown sounded like a eulogy. Tre Mason had one of the hardest running performances of any running back this season, and he was called “perfect for this offense,” the offense that Gary obviously hates. Texas A&M’s running back had two or three consecutive runs of five or more yards and he was “special.”

I know this sounds like a biased homer unable to hear their analysis objectively, but go back and listen yourself. It was completely one-sided. If you’re not Alabama, if you’re not the returning Heisman winner, they have no story for you. Unless you’re a team like Vanderbilt doing something extremely amazing, you’re just something that ruined their prediction. But enough about commentators. They had to watch and tell the world that Auburn beat Texas A&M, so let’s talk about that.

I said in my game preview that if Auburn stopped Texas A&M on at least three drives, they would win the game. With two interceptions and a forced punt, Auburn did just that before the halfway point of the 2nd quarter. Manziel showed he was human (greedy) during a few “amazing” scrambles that ended in a poor throwing decision.

Aside from the opening drive, which technically didn’t happen because CBS was showing commercials for Red Lobster while it happened, the defense set the tone in the first quarter. The Auburn offense showed early that they were going to be able to slice through the Texas A&M defense all day, but the defense let Mr. Pigskin know that it wasn’t going to be an easy day, definitely not as easy as last year.

The biggest reason Auburn was able to outlast the Aggies in the 4th quarter (outscoring them 21-10), was the fact that the Tigers had completely worn out the Aggies throughout the game. The running game was like a knife through warm butter during the 4th quarter, scoring three times in less than 3:46 each drive. Johnny Manziel was playing with a horse tranquilizer running through his arm, but it wasn’t enough to give his legs a boost. He was chased down by Kris Frost and Dee Ford twice in the last drive alone.

Auburn has depth throughout every position. That’s why they could rotate throughout the game and keep players fresh. That’s why there are season-ending injuries like Whitaker and Holsey, and possibly Justin Garrett, but there is no dropoff when the backup comes in.

As for Nick Marshall, he outplayed Johnny Manziel at his game. Yeah, I said it. He rushed for more yards and more touchdowns. He threw no interceptions. Manziel beat him at passing yardage and touchdowns, but most of every passing stat belongs to the work of Mike Evans. Overall, Marshall ran the offense better and was much more careful with the football. Manziel was running for his life most of the game and threw the ball up to a huge receiver who was open due to his scrambling. He’s great, but Marshall didn’t hurt his team as much early in the game.

The bottom line is that Auburn is a more complete team than Texas A&M, and as this game proved, having the best player in the game means nothing if it’s pretty much all you have. A complete team will beat that nine times out of ten.

This win was not a fluke. This win was a statement. Last year was an anomaly. This year is Auburn.

I’m not sure why none of the other carriers moved over properly. Huntsville CBS through DirecTV started right on time.

I agree about the commentators, they were just waiting for Auburn to fall and Manziel to blow us away. Was it intentional they kept saying Prosche’s name wrong? Because they got it right once or twice, but continued to say it wrong. But you are right, every play for A&M was magical and every play for Auburn was a eulogy. At the end tho, Auburn had beaten the phenomenon Manziel at his own game. I heard some commentators say, “They should have called a “horse collar” on Auburn for tackling Manziel……but never said anything about the block in backs or the consistent illegal lining up on the line that they were called for a few times, but they kept doing it. Whatever people say, Auburn is better, and proved it on Saturday night! Let’s keep it going and win it all!!! WDE!

James: I live in Utah, and on CBS, the Georgia game ended, and commercials kept us from seeing the 1st drive. But we got to see the 1st drive of Auburn! :)

I was in DC this weekend, and the commercials there kept the game off for the first drive, as well.

I guess I am as big a homer as WB, but for the love- -can Verne even pretend a little to be unbiased? It was ridiculous. After the first score, Danielson said that Marshall “was doing his best impression of” Manziel. Really? Not that he made a great play as the Auburn QB? And then at the end, Danielson congratulates Gus Manziel on a great win. It took him 3 tries to say Malzahn’s name. It’s horrible. How Mike Slive and the ADs who negotiate the TV deals allow this to continue to go on is deplorable. You would think they have the power to dictate who calls the SEC on CBS, their marquee game.

I had envisioned this reaction would happen on Saturday around lunch, and had scoured the Tune In Radio site on the internet for stations in AL that would carry the game in order to sync up my DVR so I could listen to the broadcast with Rod and Stan instead of Ace and Gary. However, all those sites shut down their stream during the game- so does anyone know how to stream the games over the computer? I’d be very grateful, and I think my family would thank you too since I spend alot of time yelling at Gary and Verne.

Yeah I think everyone noticed that Verne and Gary were being very biased…i was glad to shut them up with a great win Saturday…I think it took me 2 hours after the game to come down off that high…I’m so proud of our guys…WAR DAMN EAGLE!!!!

Verne and Gary sucked, its just that simple. Never quite seen such an embarassing job of calling a game. They kept going over that supposed horse collar – because who could possibly tackle Manziel without cheating, right? Yet, they said nothing about all the holding Texas A&M’s offensive line was doing and getting away with. Even when they reran one of Manziel’s TD throws over and over, they never mentioned the linemen RIGHT THERE blatantly holding one of our guys. Pathetic.

I listened to the entire game on 102.3 out of Roanoke, AL and LaGrange, GA. Watched it, too, but muted the TV. There’s about a 5 second delay from the radio to the TV, but it was worth it to not have to hear Verne and Gary. Actually, it was kinda nice because I could hear what happened, then watch or not watch, depending on whether or not something good happened. Stupid, I know, but I may be using that method again in the future! WDE!

I can’t stand Gary and Verne either, but I loathe Brent Musberger. He is equally bad and biased against Auburn, not to mention creepy too. Musberger referred to Auburn as a “Cow town”, when I was at AU in the ’80’s and said he hated coming there, because he had to fly into Atlanta and get to Auburn by car. I yell more at him, when he is announcing our game, than at the action.

Thanks Willy- was that over the internet (their site?) or do you actually live in LaGrange or Roanoke?

WarEagleGirl- I agree on Musberger, but fortunately he’s out of our rotation with the night games on ESPN. I can’t believe I just typed that- -that something on ESPN is preferable over anything else. A new low point.

I’m amazed at the whining you guys do. Every team feels CBS is against them. I watched the SEC Championship and they were so biased in favor of Auburn and I didn’t like either team. It was so obvious when a Mizzou player was open for a TD and Danielson is saying uh-oh. I really hope FSU cleans your clock, especially after the bush league move of your DB on the Mizzou running back. Pathetic. You guys have had luck and no calls all year. Hoping it all comes back at you against FSU. Go Noles!