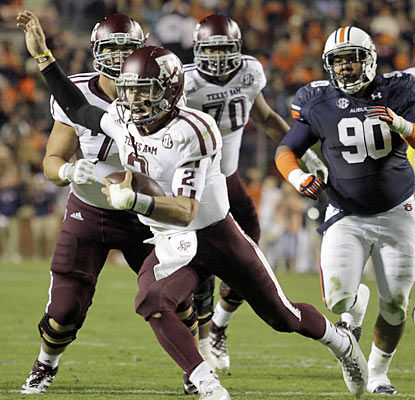 When one thinks of beating Texas A&M, the first question that comes to mind is “How do you stop Johnny Manziel?” I then respond to this question with “Who?” because I’m just like that. But really, when it comes to beating Texas A&M, all you have to do is score more points than they do. Novel concept, huh?

Texas A&M’s defense makes that easier than it should be regardless of the fact that they have one of the top five quarterbacks ever on their roster. They are currently in the low 100’s in terms of stopping the run. They’ve given up 28+ points to teams like Rice, Sam Houston State, and Arkansas of all teams. They allowed Alabama to score the most points it’s scored all season (49). Keep in mind that Alabama has played teams like Georgia State, Colorado State, and Kentucky.

Auburn currently ranks 7th nationally in rushing offense. That’s like the complete opposite of low 100’s. That’s a perfect matchup for Auburn. That’s going to be the difference in the ball game.

Johnny Manziel can and will run all over the place and can and will make some throws that nobody has any business making, but if Auburn can run the ball (and they can) and eat up the clock, Manziel’s talents will be sidelined, literally.

I know there have been lots of rule changes recently, and we gots womenz on the playoff committee, but I don’t think they allow quarterbacks to run and throw the ball when their defense is on the field. I’m not positive, but I’ll check the rulebooks and get back to you.

All it’s going to take for Auburn to beat Texas A&M, and I say this with 100% confidence, is for Auburn to cause Texas A&M to punt or turn the ball over three times. That’s it. It’s that simple, Auburn. Keep the Aggies out of the endzone three times and the game is yours. I’ve never been more confident about an arbitrary prediction in my life.

Remember when Tuberville won every road game over a two year span or something like that? Remember when you didn’t care if the game was in the Swamp or Tuscaloosa? I have that feeling right now.

Auburn hasn’t won a road game since beating South Carolina early in the 2011 season. They’ve lost seven straight road games. That has to end soon. This team is playing like they can end it. They’ve been to Death Valley. They know what a loud home crowd sounds like. Kyle Field is loud and weird, but it’s not Death Valley.

Getting me all hyped. Where’s my helmet? I’m ready to go kick some aggie butt too.

FOR REAL!! I really think the confidence is the difference for these players. The D knows they give up points, but they also know they dominate the line and get turnovers. The O knows they miss a couple of passes, but they also know they dominate the line, outrun the defensive backs and get in the end zone. These guys know they are running a successful system and they know they do it without making a lot of mistakes that create negative plays.
A&M knows they have 2 or 3 good players. They know they have a bad defense that has to be bailed out by the offense. And, according to all the interviews I’ve heard, they know Auburn is dangerous!
WDE!

I am a Texan who was converted into an Auburn fan over a decade ago. I was an A&M fan at the time. The switch wasn’t easy, but I made it to the 2007 Cotton Bowl. I randomly chose a hotel, and it happened to be the team hotel. The deal was sealed at that point after a radio pep rally in the bar/lobby area. I was recruited by A&M out of high school and spent some time up in Bryan-College Station. It’s very Auburn like in a Texas way. That’s why the switch became easy, the two schools are very similar. Auburn has bammers, A&M has TU.
That stadium is loud and it’s constant noise because of the chants the yell leaders keep going. But I have been in Baton spooge, Kyle Field is no “Death Valley”. The environment will not pose a problem. The biggest problem will be our young players on a big stage, at f-ing 230 pm. I hate the early game for Auburn. Mason and Marshall along with CAP will probably combine for 400 yds. Grant may get another 80. I have been saying we could go into Georgia with only one loss. I agree with the stops, we will get them and win 42-31. Defense gets 2 turnovers.

Auburn will score over 30 points and AU wins almost every game when scoring 30 or more points. AU is holding opponents to under 20 points per game. AU should easily win this game.

Hey, we got the win and running was key . Did someone say RBU? Tre Mason is Michael Dyer 2.0. He moves piles and turns 2 yards into 6.

What a game! Takes me back to 2010 when we win nail voters like this.

Mike dyer without the attitude or legal issues…