You’ll have to excuse the tardiness of this post. I wanted to have whatever that was we saw last Saturday gone and out of our minds by today, but a bunch of jealous geeks hellbent on bringing down anything successful (sound familiar?) brought down GoDaddy, which meant the ‘Blogle was down as well. From what I saw, the site was down almost all day, and I couldn’t get in to to post anything.

So for all of you that were dying to read this enthralling analysis of what happened this weekend, you can blame it on some fatty eating pizza and drinking Mountain Dew next to his mom. Wait, that’s what I did this weekend… Anyway, let’s get this over with. 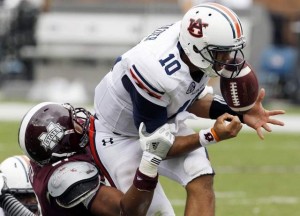 I guess it was just time. Auburn had gotten semi-lucky the past two years against Mississippi State. It was time for Auburn to lose one. I guess. For whatever reason, talent levels don’t matter in this game, and it always seems to be close. In a way, that has made it a small early-season rivalry (I’ll never let it be called a real rivalry).

We heard all week that Dan (and Megan) Mullen needed this game more than anything. Yeah, I don’t know about that. Mississippi State is still a perennial 8-win max team and I don’t know what game two is going to do for you, but apparently it was REALLY important to them.

The law of averages just finally showed up. I’m not talking about any of the performances just yet, but as they say: even a blind squirrel finds a nut every once in a while. Yes, the squirrel chaser himself, Onterio McCalebb, did find a pretty big nut to open the second half, but even that wasn’t enough to overcome what just didn’t appear to be in the cards.

Now about those performances… Kiehl Frazier admitted to the press that he made a mistake in at least 75% of his plays. Ok, that’s a lot. I’d say the normal number for a decent quarterback is probably 15% or so. So yeah, 75% is like a TON. But at least he’s admitting it, and he’s probably being a little hard on himself.

He only threw the ball 22 times, and Auburn ran it 39 times. He completed 13 of those 22 passes (most of those once the game was over). So 75% is probably really high, but it’s good to hear that he’s taking responsibility, but not in the sulking sense. Not in the “worst day of my life” sense.

He’s good at football. We know he is. He just has to get out of his own way. He seemed to regress on Saturday, but that’s what a true road game against SEC talent will do to a guy making only his second start in college football. He’ll get better.

The defense, as much as you don’t want to say it, statistically got a little better. They held the Bulldogs to one 3rd-down conversion in nine attempts. That’s very good, but it also probably means that Mississippi State just did all their dirty work on the first two downs. I mean, forcing nine punts is nice, but if everything else results in a touchdown, I guess it’s not so nice.

The obvious, glaring BASIC FUNDAMENTAL OF FOOTBALL that still continues to frustrate Auburn coaches, fans, and hopefully players is tackling, or lack thereof. It even forced me to go away from my normal sunshine pumping self (wow, it got 344 retweets) for a brief moment late in the game when it seemed like Auburn was trying to help a guy’s highlight reel by diving at his feet in hopes that people thought they were trying to tackle him. 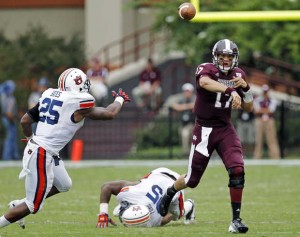 It wasn’t just at the end of the game when guys had probably given up a little, It was happening on the first drive of the game. There was one play where a not-so-mobile Tyler Russell looked to be dropped for a 15-yard loss, swallowed up by two or three defensive lineman, only to get away, and successfully dump the ball off to a wide-open receiver. Yeah, the guy was a few yards short of the 1st-down, and yes they missed the field goal on the next play, but still…

You know I don’t ever really get down on the players, or even the coaches that much, because they are all better at what they do than I ever could be, but tackling is a basic fundamental of football. That’s not really even something you have to teach. Sure, there is technique, but it’s a pretty simple idea: just get that guys knee on the ground.

This is not just the current players’ fault, but at some point in the last decade, tackling turned from hitting the guy and wrestling him to the ground into “let me see how hard I can spear you and make SportsCenter.” That’s the problem. It’s not about tackling. It’s about getting a “oohhhhhhh” from the crowd. It’s about “lighting ’em up.” Let’s make it about “you didn’t gain ten more yards after I dove past you or let you go.”

Look, i know it’s harder than it looks. I know you guys work hard. I know it’s under a microscope now, so it’s probably not near as bad as we all think, but just tackle. I mean, you did the tough part. You got to the ball. You read the play correctly. You did it. Just tackle the guy with the ball.

The bottom line on the defense for me right now is that I feel like if Auburn gets more than one possession behind, then the game is lost. I am scared to death and almost certain that the opponent is going to score every time. They have a great pass rush, but other than that, the middle of the line and linebackers get gashed on runs, and the secondary lets every single pass get caught. They aren’t within five yards of a receiver when the ball is caught. But you already know this, so there’s no need in rehashing.

On the positive side of things, special teams continues to be perfect. Parkey is 100% on his field goals, and I think has caused a touchback on all but one kickoff. Clark is booming punts better than anybody in the country. McCalebb in his few attempts to return a kick has already taken one to the house. With the new touchback rules, it’s likely he’ll be one of very few to return a kick for a touchdown until the rule is changed for reasons of stupidity. Quan Bray, while he hasn’t really done much on punt returns in terms of actually returning the punt, has caught all of them cleanly. Remember when that was a small victory? Every one knock on wood right now.

Look, the game sucked. Auburn seemed to get worse from week one to week two. Everything that was a positive in the Clemson game turned into a negative, and everything that was bad in the Clemson game got a ton worse. I’m going to chalk it up to starting the season with two quality opponents, both away from home, with a generally young team learning two new systems. That’s really not ideal.

There’s no excuse for what happened this week compared to what happened last week, but I think coming home will help this team tremendously. The opponent (UL-Monroe) is a usual cupcake, and still technically is, but with their win last week over Arkansas more emphasis will likely be put on this game – and rightfully so. Until Auburn corrects mistakes and wins a game, everybody should be treated as the New England Patriots.

Things will get better. I promise. As of right now, they can’t get worse.

So I am thinking that we need to take this game VERY seriously. I just wish it was our FIRST game instead of our third! Don’t tell anyone I said that, especially the haters. Hey, I am ALL IN, today and every day. I hate losing. Call me a hater in that regard. Let’s get after it Tigers. We don’t just need a win, we need a momentum shift. We need a baseline.

Yeah I think I’m going to go ahead and jump ship on Chizik. He’s been there just about 5 years and hasn’t really proven himself. The year with cam was awesome, don’t get me wrong, however, he’s yet to show the world without a Heisman player he can’t deliver a solid 8-5 win season, and when I say solid I mean losses that aren’t by 2+ touchdowns and wins that aren’t by 5 or less points. The reason why I bring all this up is because this game has summed up Chizik’s overly conservative play and lack of teaching in fundamentals. We’ve essentially turned ourselves into Florida. In the respect that we are stacked with talent but aren’t doing anything with it. Auburn needs a coach that can compete with Saban every year. If we don’t, pretty soon we’re going to be finding youtube videos of Alabama celebrating 6 or 7 wins in a row.

I’ve never seen an Auburn team as lost as this past game. This team honestly looks like they’ve never seen a football before. They played alright against Clemson, but still could/should have won that game. Team is way too young and they just lack the fundamentals. Something drastic needs to be done or the LSU/UGA/Bama games could be worse than last year. And that’s saying something.

Question, how come Auburn never has a good secondary? Even in 2010 that was our weakness.

“…how come Auburn never has a good secondary?”

Can’t agree with that. 2004 had a very good secondary (Carlos Rogers, Junior Rosegreen, etc.). There were some great units back in the late 80s (Kevin Porter might have been the best corner AU ever had). And in the mid-90s, they had guys like Calvin Jackson, Chris Shelling, and Brian Robinson. For whatever reason, Tuberville just did a lousy job of recruiting and coaching DBs in the last half of his tenure.

I was with you last week, still looking for that pony in the pile of poop. No more. This team is just flat out bad. Possibly the worst I’ve seen at Auburn in my 25+ years of fandom (definitely worse than 2008, probably worse than 1998). These guys have no fight, no fire. Zero conference wins does not look unthinkable anymore.

I’m a new reader and appreciate your optimism. I was pretty bummed out after Saturday’s loss and was ready to throw Chizik under the bus. I think I’m now going to reserve judgment until I see them play this weekend. They need to make a statement. And soon. It sounds like T’Sharvan Bell will be calling a team meeting. Somebody needs to.