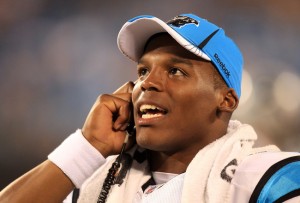 Back in December, Coach Gus Malzahn called parts of the Auburn Family as a sort of “glad to be back.” I say “parts of” because I didn’t get a call. Still bitter.

Yesterday, Cam Newton, apparently using the same call list, dialed a few numbers of the Auburn faithful as well. His message was one of thanks and bewilderment at the large crowd on A-Day. He also included a reminder about the 2013 season opener against Mike Leach and his Washington State Cougars. He concluded the call with his unorthodox way of saying “War Eagle” that we all grew to love in his speech at the 2010 National Championship celebration.

If you were like me, and weren’t lucky enough (or enough of a contributor) to get a call, you can listen below.

Dang, he must really hate Auburn, but anyway. Maybe one day I’ll get on this call list. Did you?

Thanks to @auWESome for @theboddagetta for help with the audio.

Ride the BCS Bus from Vegas to Pasadena