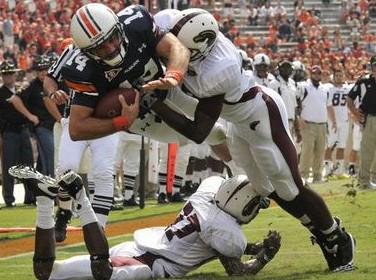 For instance, Auburn will continue through Spring practice with at least 32 less players than the team that played for a National Championship just a little over two months ago. However, the reason the roster attrition is being looked at so heavily by the media is not just because of how many left, it’s more about who left.

As you might remember, a few of those 32 players were Heisman trophy winners, Lombardi trophy winners, All-Americans, and All-SEC 1st-teamers. Needless to say, a lot of talent is gone and a bunch of new guys are going to have to step up. I’m thinking about sneaking out on the practice field. You think they’ll notice?

So as I asked in the title, is this “new” roster, or whatever you want to call it, really a bad thing in the long run? I know when you read the question you immediately thought that even the most homer of homers couldn’t see this as a good thing. Sure, it might not be all that bad, but how can it be good? Glad you asked…let the optimism begin.

As I mentioned, there are a LOT of open scholarships, and although it won’t really mean much to this season since the signing classes around the nation are pretty much set in stone by now, this could be a huge plus for years to come. Gene Chizik and his staff have proven that they can recruit and get top players to sign. They did it in his first year, on limited time, and brought in a decent class. The past two signing classes have been in the top 5. They know what it takes to get good players to Auburn.

When it comes down to it, we all know that kids just want to play, with school prestige and the chance to play for championships coming a close second. So it sounds like Auburn might be the perfect place for all the 5-star recruits to come for the next few years, right? Auburn has proven they can compete for championships, and it just so happens that there are now plenty of spots for those high-profile recruits to come right in and play on a championship team.

In Chizik’s first year, the scene was very similar to what he’s facing now in terms of the number of players. If you remember, multiple guys on the defensive side of the ball had to play every down of most games because there just wasn’t enough able bodies to give them a break. Things shouldn’t be that bad because there is a little more talent on this team than what Chizik was able to pull together in 2009. I don’t think it’s going to be easy, but he’s done it before.

As embarrassing as it was, the dismissal of the the four geniuses that decided to spend their time leading up to a trip to the White House and receiving National Championship rings by robbing people at gunpoint was actually a good thing. Sure, their losses will hurt the depth chart, but we all know and I’m sure agree that any weeding out of those types is much more important than an extra guy in the rotation. Chizik’s immediate dismissal also sent a clear message to present and future Tigers that actions like that are not tolerated at all.

Three years into a coaching staff’s reign at a certain school there are obviously some players left over from the previous staff’s signing classes. Like it or not, there are some of those players that don’t buy in to the new coach. This attrition could be good for weeding those out as well. What I mean is that this just makes a team full of Chizik-signed guys a reality quicker than most teams usually experience, and Chizik-signed guys coached by Chizik is what we want.

I know that whole idea is a pretty big stretch, and it’s hard to believe that any guys on the National Championship team last year weren’t “ALL IN,” but it is now obvious that a few weren’t really following all the rules, especially two rising seniors. They looked it as “you didn’t recruit me, I’m almost outta here, you can’t tell me what to do.” I know that’s sad, but it happens. Auburn may suffer from their losses in the short term, but getting rid of attitudes like that is definitely a good thing for building a long-standing, successful program.

I’ve spun this about as much as I can, but I do truly believe that after all of the negativity that has been thrown Auburn’s way over the last year, it does kind of feel good to have sort of a fresh start. We have no idea how good the 2011 Tigers will be. We do know that 95% of a National Championship coaching staff will be coaching them. We do know that we have the best offensive coordinator in the nation. We do know that Gene Chizik is building a program that’s hellbent on building men. Knowing those things should give us no doubt that although a few of the faces may change, the on-field results will stay the same.

Note: This is my 700th post. You are the wind beneath my wings.

Blogle you have fired me up for some football!!! April 16 better hurry up

This will be an interesting and exciting year. We have a blank canvas upon which this coaching staff can prove its skill. If ever there were a time for a coach and his staff to make an impression on the college football world, this is it.

And for that I want to thank the coaches who stayed. It was a gamble, passing up lucrative offers from other schools in the afterglow of a National Championship. But this season is a golden opportunity to make names for themselves. The roster is filled with young players from last year and cherries. The variable is now the coaching staff.

I have faith in our team of coaches. They proved themselves as soon as they arrived on campus. But there were naysayers who said they did it with Tubby’s kids, or it was some shady Cam deal, etc., yet these same naysayers never said anything about how good Cam was until about the fifth game. Most made negative comments about Cam’s A-Day performance. And no one predicted Fairley’s performance.

So now the world will see what these coaches can do.

TigerEyez13–I second what you say, absolutely.

Personally, it may all be for the good that we aren’t going back into a new season with the same championship roster. The expectations of a repeat won’t be present. Having new faces will make it all more exciting.

It’s college football, it’s AUBURN football and that’s what is important. I share your optimism for the future.

Next season we should expect 8-9 wins, but be prepared for 7. When 2012 rolls around I think we can reasonably expect to win the SEC.

Chizik needs to groom a successor to Malzahn and get one more good signing class before I’ll be 100% comfortable. Last year wasn’t a fluke, but we certainly go our share of breaks on and off the field. We need to get to the level of “interchangeable parts” with players & coaches.