I hate when people apologize for blogs being late and such, but I’m about do it. Grandaddy Blogle passed away Monday night, so I’ve been understandably out of it, and not really in the mood to be blogling. However, every single time I saw Grandaddy over the past few years, he would always ask me about my job and about my site. He always loved to hear how much the site has grown and about what I was working on next.

So although the Blogle family is still mourning the loss of a great man, if he were here, he’d expect me to be working and working hard. Therefore, I’m going to do that, especially since a review of the LSU game will be irrelevant soon. This is going to be quick, but here you go. 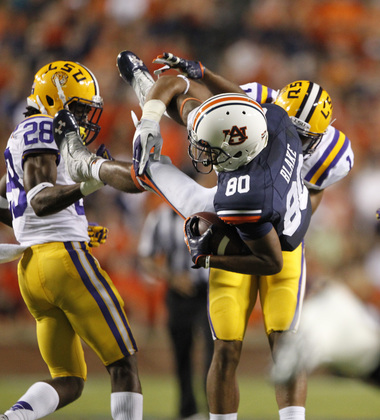 Dang. I was so close. I was already planning the tweets to various “fans” of Auburn and fans of other schools letting them have it for their doubt of the good Tigers. “Auburn doesn’t have a chance.” “It’s going to get ugly quick.” And as media personality, Bomani Jones, said in response to my tweet about Auburn having a chance if the the stadium was all the way turnt up, “In football?” Yes Bomani, in football. Still waiting on your response after you saw the final score.

But as they all say, close doesn’t count. Auburn lost. They gave the supposed 2nd best team in college football all they wanted. They held the then best offense in the SEC to ten points. They scored the first rushing touchdown of the season against the staunch LSU defense. But in the end, Auburn lost. They are 1-3. And a huge chance to turn the season around and silence some critics was spoiled.

The offense appeared to perform better, but the output wasn’t much different with low yardage, low point total, ineffectiveness all around. However, I don’t pin it all on execution.

For most of the 2nd quarter, Auburn seemed to have the LSU defense running circles. Lots of misdirection and decent pass protection made it at least seem like Auburn had control of the game. But as Auburn held the lead through the 3rd quarter, it appeared that, like the LA-Monroe game, they went into “don’t lose” mode. Instead of taking chances, they played the field position game. Yes, that’s sometimes important, but Auburn was almost in a no-lose situation. Given the way the season has gone, the fact they weren’t being blown out was a small victory in and of itself. YEP I SAID MORAL VICTORY MORAL VICTORY I SAID IT MORAL VICTORY!!!!!

No, not a moral victory, but in a sense, Auburn was playing the part that LA-Monroe had been playing the previous two weeks. Why not just throw it all out and go for everything? You’re 1-2 and you’re hanging with the #2 team. Don’t go in a shell and wait out the game clock. Take chances and go all out.

Eventually this approach allowed one mistake – the muffed punt – to take over the game. The approach hit its pinnacle with four minutes left in the game when Auburn was faced with a 2nd-and-16. Loeffler/Chizik called a quarterback draw, which gained four yards, but was too conservative. Then a Mason run up the middle was called on 3rd-and-12. Really? That’s what you went with?

Yeah, the play almost worked, but then you punt on 4th-and-semishort at mid-field? Why? Why would you run the ball twice to get to a manageable 4th down situation, only to punt and give LSU the chance to run out the clock? Ok, I’m done.

LSU had the top offense in the SEC, scoring 41, 41, and 63 points in their first three games. Take away the safety, and they only scored 10 points against a defense that had given up 26, 28, and 28 in their first three games. Why? Because Mettenberger is not all what everyone wanted him to be, and the fact that LSU’s offense is about as NFL as it gets. VanGorder knows how to stop that style of offense.

He didn’t play too many Clemson style offenses while at the Falcons. It only makes sense. Defenses don’t just appear to improve that much in one week. It has to be what they were going against. Either way, it gave them tons of confidence. Tackling and pass breakups continued to improve, and for the most part, the run defense was the best it’s been. They appear to be grasping VanGorder’s concepts. 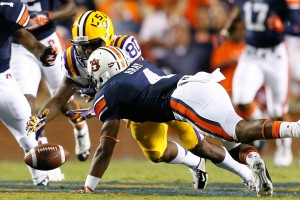 The special teams finally had their first snafu of the season against the purple tigers. As I’ve already mentioned, the muffed punt by Quan Bray was a huge turning point in the game and really the first mistake made by the kicking game in any facet all year. Bray hasn’t even hinted at bobbling a kick all year and just one second of taking his eye off the ball is all it took. Nobody feels worse than he does, so all punt return specialists yelling “JUST CATCH THE BALL” the next time he was back there, get off the dude.

The way I felt after this game was about the same way I felt after the 2009 Iron Bowl. Auburn had more than enough opportunities to take over both games, but a little bit of youth, and a little bit of newness on offense and defense was the difference. We all know what happened the year after that Iron Bowl. Could the same thing happen the year after this one?

Bray also missed a chance to block Russell Shepard on McCalebb’s kick return that ALMOST went the distance. And Bray let a punt go over his head, costing Auburn some field position. So although he has generally been solid this year, he did have a tough day vs LSU even outside of the muffed punt.

That kick that went over his head was the next punt after the muffed one, if I remember correctly. I guess he still had some nerves.

God bless you, Blogler. My condolences on the loss of your grandfather.