You may or may not know that yesterday, at 8:22 pm, @BeautifulBlogle, @BabyBlogle, and I welcomed @BabyBlogle2 into this world. Therefore, my normal schedule of game week posts may be a little off this week. But in an attempt to keep everything as close to normal as possible, I’ve been given 15 minutes to write up some quick thoughts on Clemson. I wouldn’t mind just moving on to Mississippi State and forgetting that whole thing ever happened, but you can’t figure out where you’re going until you know where you’ve been. 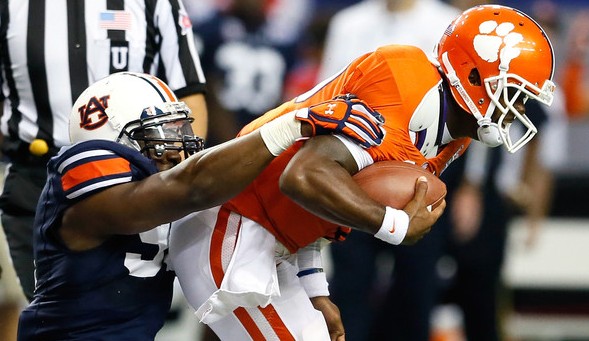 Keep in my mind that I have only watched the game as it was played live, had around 10 hours of sleep total since then, and have been cooped up in a hospital room for around 36 hours now. Understandably, my memories of the game may be a little off and my thoughts may be erratic. In that case, I’m going to fire them off quick. Here we go.

– Kiehl Frazier started off doing exactly what he needed to do. He managed the offense, made only a few early first game mistakes, and delivered a perfect pass to a wide open Emory Blake for the first score of 2012. Then, as Clemson continued to keep the pressure on, and as a few of his passes sailed over receivers’ hands, he got a little skiddish and seemed a little scared to sling it. As the game wore on, he held on to the ball more and more. This doesn’t bother me all that much because he’s a sophomore, it was his first start against a top-15 team, and it was a high-profile game. Guys are going to get a little bit nervous. Now that he’s seen how it is, it won’t happen again.

– The running game is going to be just fine. Without Tre Mason’s fumble, I feel like Auburn would have completely been able to take over the game and run it up and down on Clemson. However, it seemed like once Auburn got in the red zone, they put what got them there away. Tre Mason’s five yard runs were replaced by touch passes to the corner of the endzone. Not sure why, but I’m not a coach.

– I know you can never put a game on one play, but I will say that I believe that if Trovon Reed had made the attempt to put his feet in bounds on his catch out of the back of the endzone, then Auburn would have won the game. Auburn never scored from inside the redzone and by the end of game that had to be in their heads. Getting one score down there out of the way early would have loosened them up, and you never know what would have happened. Instead, the game was tight the entire time, and the more experienced, more explosive team was able to take advantage. Auburn, being less experienced, had to be playing tight with the thought that they had been held out of the endzone other than a wide open bomb early in the game.

– The defense will tear up a less mobile quarterback. All night the ends were in the backfield putting a good rush on Tajh Boyd, but given Boyd’s ability, he was able to squeeze his way through defenders and gain yards that he didn’t appear to have. He is one of the most athletic quarterbacks Auburn will face this year, so it’s not likely that Auburn will have this problem again this year.

– The cushion in the secondary that we’ve all hated for the past few years appears to still be there. I’m not going to pretend to understand anything about defensive secondary schemes, but if one coordinator does it and then a supposed “better” coordinator does it as well, maybe it’s a sign of the talent. I know it seems like it would be better if a corner back is right up on the receiver, but that also seems like an outfielder who dives at a ball in the outfield. You better be dang sure you’re gonna catch it/tackle him, otherwise it/he’s gone.

It could be that I have a newborn to make me forget the normal feelings after a loss, but as much as I hate to lose at anything, this one isn’t stinging as much. Sure, I can say that Auburn was good enough to win, and that one less mistake probably could have meant a win, which is makes it even more frustrating, but I’m just not as bothered as usual.

They say the best one to lose if you want to do anything later in the season is the first one. Plus, it was an out of conference game, so in a sense, it doesn’t totally matter. If Auburn were to win the SEC West, nobody would even remember or care about this game. But, and that’s a huge but, for that to happen, lots of mistakes must be corrected. The good thing is they all seem to be correctable mistakes.

The new coordinators now have real game footage to teach from, and they always say the most improvement is made between game one and game two. We’ll get a good chance to see if that’s the case as the Tigers travel to Starkville in five days. If it’s not the case, then, yeah, let’s not talk about that.

Alright, back to the newborn…

Oh wait, a few other things:

– Dabo was a little more tame in the post game interview (but I almost took it in a condescending way). He did, however, mention in a radio interview today that his “Bama buddies” were pulling for him and called them the “Clemson Tide.” Of course they did…

– You may have seen the Kentucky fan high five fail yesterday, but have you seen the Auburn one? Yeah, one of those guys is one of my brothers. We’re so proud.

Congrats on the new addition to the Blogle family!!

Congrats to you and @BeautifulBlogle! @BabyBlogle2 and I share a birthday!

In football news, I agree with your quick hits. I think we will be fine. And while I don’t really want to admit it, Clemson will probably be a good team this year. That will make us look better as the season progresses.

our bowl record is a little under a 730 winning percentage.
one of the best in the sec over that same time.

it is clear that the coaches haven’t taken these games very seriously and the administration hasn’t done anything to discourage this practice because they keep scheduling these embarrassments.

Congrats on the new blogle!!

Congrats on the new baby. I welcome one myself this Friday. I will be watching a lot of football while the hospital helps take care of the family. Next weekend I am on my own.

Congrats on the baby. He is precious. Yep. This is coming from a Clemson fan. I almost just copied and pasted one of the comments from above. Hehe.

I think your team will come a long nicely. But what do I know. I went to Clemson. :)

Congrats to you and the family WarBlogle! Your thoughts were spot on, and many of the same I had. Go Figure! Try to get some sleep when you can, says a Father of 4!

Wde and congratulations on the birth

Pretty good commentary from a sleep deprived Dad. LOL. Let’s hope this team can learn from mistakes; we will find out this Saturday in Starkville. I agree, this game was winnable and that made it hurt even more for me. But after watching AU football for over 50 yrs., I am ready to put this one away and move on. In my younger days, I had to go to bed with a washrag over my eyes. LOL. Life goes on and the pendulum will swing back in our direction. Oh Lord, I dread those cowbells this Saturday!

You’re much more coherent than I was after my twins were born. I was pretty down on the team after the game, but your commentary convinces me that things are not so bad. If this defense can finally gel in the back seven (a big if), then AU can be pretty good this year and maybe pull off a big upset.