Well, it’s the first mailbag of football season. I expect tons of questions about formations, X’s and O’s, and hard-hitting, in the trenches football questions. Nope, got one about a dude who hates his wife, one about Lutzenkirchen dancing, and one wanting to know about off the field problems. Come on guys, it’s football season. Just kidding, great questions. Keep sending ’em. 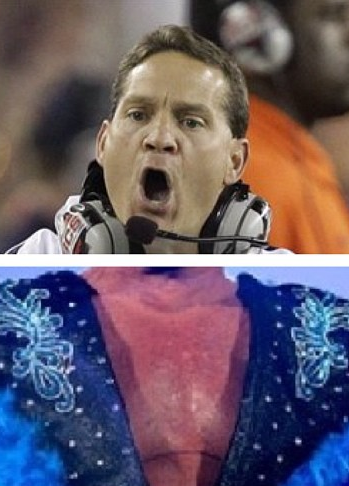 Why is it that nice-guy coaches like Chizik and Mark Richt catch so much negative media attention when they actually discipline players who made off the field mistakes. While coaches like Urban Myer and Spurrier have a track record of giving guys unlimited chances to continue embarrassing the program. They are the schools with problems, but we are the ones that wind up with the image problem.

Why do people love Ric Flair? He was the dirtiest player in the game, but still over half of wrestling fans loved him. Why? Swag. Soundbites. Charisma. He owned the camera. He owned the audience. Therefore, he could do what he wanted.

Gene Chizik and Mark Richt get no love from the media because they give nothing to the media. I’ve been over this. They can do the right thing as many times as they want, but until they kill the media with multiple championships, they will never get the favor of the guys who have the ability to crush a guy in one sentence.

Spurrier is the funny old man that will say anything, and Urban… well, I don’t know why anybody likes him, but I guess it’s the multiple championships thing. Either way, people love a guy who will speak his mind and be a little cocky about it. Chizik and Richt are not that guy.

A guy that goes by “El Hombre” has an oppressive wife. Let’s all take a moment of silence…

Your wife seems cool with your Auburn obsession. Mine is not however. She’s from Texas and doesn’t understand the culture we were born in. You got any hints to get my wife more tolerant of this healthy obsession we call Auburn Football?

It’s pretty simple. You get in your car, you turn on the car, you drive the car, you pull your car into a Lowe’s or Home depot, you get out of the car, you go in the store, you buy duct tape, you go home, and there you have it.

But seriously, it is your duty to change her ways. People not born into this great family must be taught of its ways and its beauty. Or, you must bring her to the Plains at least once. It should only take once for her to fall in love. Some are stubborn and may take two or three trips, but she’ll eventually come around. They always do. If after five attempts, there is no change, then I ask you to take a look at the two ads on this site that promote law firms. Hope this helps…

Oh, and yes my wife is very cool. She was a Bama fan by default until she went to Auburn. Since then, I can’t take her anywhere without her trying to fight someone in crimson.

With all the reserves on defense that have taken over starting jobs or moved up on the two-deep, do you think Roof just couldn’t evaluate talent and was playing the wrong guys?  Or have guys gotten better?

Each year, Chizik’s recruiting classes have gotten better, which means the talent level is stronger the younger the players get on the depth chart. I don’t think we can look to Roof and say he was playing the wrong players. He was most likely playing the guys who fit his system. Now with VanGorder at the helm, he has just found guys (experience aside) that fit his system better.

That’s not to say that the upper-classmen that are being passed over for sophomores were playing when they shouldn’t have been. They just may not be fit for this system. But again, better players have been recruited over the years, and sometimes talent overrides experience.

Jay has a question about Lutzenkirchen…

What are the chances that we will get taught how to Lutzie in the opener?

Haven’t we already been taught? It is known that Lutzie did take dance class over the summer, so he may drop some new moves on us if given the chance.