You may remember Eric Blackerby, or more importantly, you may remember the shirt he wore in the Wynfrey Hotel lobby at SEC Media Days last year. It simply read “I HATE AUBURN.” 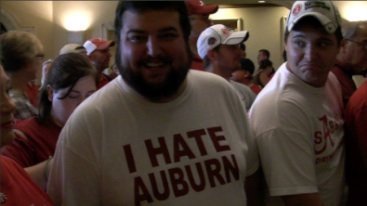 If you’re wondering, it didn’t bother me. He’s an Alabama fan. In the spirit of rivalry, he’s supposed to “hate” Auburn. We can’t say this for everyone, but I don’t think he means HATE hate, but more of, like a said, a hate in the sense of rivalry. I’m sure he doesn’t approve of Updyke’s actions or wishes any other negative actions towards Auburn as a whole. He probably just wants to see Auburn lose at athletic events. Probably…

Either way, the shirt prompted a response from Coach Nick Saban: “I would tell him it’s not personal, that it really isn’t personal. That is not really the way that we should respect the opponents that we have.”

That prompted a pretty quick-witted response from Blackerby: “It’s like I went to church and God told me He didn’t approve.” Well, that’s kind of sad, but it is what it is.

The one simple statement on one simple t-shirt ending up being one of the biggest stories from Media Days last year (which shows you what Media Days as turned into), so I thought it would be funny to play off that story, specifically Saban’s response, and give reporters something similar to fill their headlines, especially since this year’s Media Days was even more of a snoozer.

So I asked @andrewcamp7 of ATC Grafix to make me a shirt that simply read “I DISLIKE ALABAMA.” He kindly obliged, and I had the shirt ready to go on Wednesday, when I expected a hoard of Auburn fans to fill the lobby at the Wynfrey in hopes of getting a whiff of Lutzenkirchen or rubbing Emory Blake’s beard. My plan was to give them the shirt, tell them to stand up front, like Blackerby did, and wait for the reporters to bite. 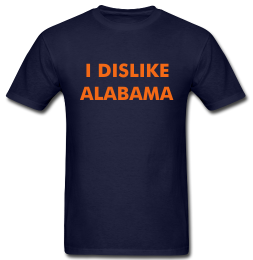 Once the lucky person was in front of the cameras, they would tell the reporters that he was just offering a classier, less brash rebuttal to Blackerby’s shirt, you know, since Lord Saban basically said “we don’t hate.” Oh, and of course they had to tell them where the shirt came from, since I’m an entrepreneur and all…

Well, I got to the lobby and saw two kids in Auburn shirts. They were around 10 years old so I figured they would probably be too nervous. Then I saw an old lady wearing a gaudy orange-sequined shirt. She wouldn’t want to cover that up with a t-shirt. And that was it. I came back a few hours later, and they were still there. And that was it.

I mean, I know Auburn fans were at their day jobs (badump-chssshhh), but there was seriously nobody there to wear the shirt. So that was a fail. What might have been…

Well, since so many people say they want the shirt, and since I had so many people tell me that they would have worn it in a heartbeat, you can now buy it in the WarBlogle.com Store. I have it available in blue and white. Proceeds will go to the “Send Baby Blogle to Auburn” fund.

Why didn’t you just wear it?

Does anyone else remember Saban in his second Iron Bowl, being caught on camera saying, “I F******* hate these guys!” The reporter then repeats it for the viewers. What a classy guy.

Do all shirt sales go to the “Send Baby Blogle to Auburn” fund?

Yeah. Well that or the daddy needs a new shirt fund.

how is it a failed attempt at fame if even you auburn folks are writing about him one year later??? he meant no harm, he’s my best friend, it was a joke.

Did you read the post at all, or let alone, the title? It was talking about MY failed attempt at fame. I only mentioned Blackerby to tell why I was doing this.