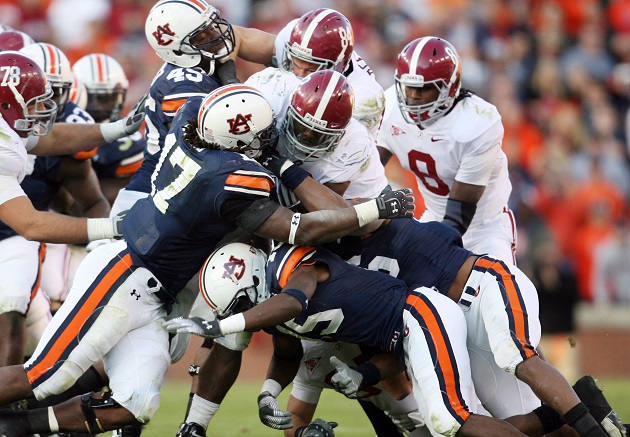 Well I had my worst week by far last week as Auburn had one of their best, and they didn’t play a game. I wish I didn’t pick the games. It was rough. But it’s rivalry week, so this should be easy. Wait, no it won’t at all.

Right now my predictions are hitting at a 82.9% click. If you would like to prove your worth with your picks and try to do better than my 49.2% accuracy against the spread, you can do so here. Make sure to do it today, there are two games on the slate tonight.

Ole Miss (-4.5) at Mississippi State – The Maroons are wearing some atrocious gold-riddled uniforms in this year’s Egg Bowl. That’s so Mississippi State. The home field advantage (is there one?) is the only reason this line is respectable. Ole Miss will win by a good margin.

Arkansas at LSU (-24.5) – LSU showed that they have a great answer for Johnny Manziel. Given that if you add all of the talent on Arkansas’s sideline and it wouldn’t reach half of Johnny’s, this one is going to be a bloodbath. The only thing the Tigers have to worry about is apathy, but the Hawgs are pretty apathetic as well. EA Sports is on crack.

Florida State (-27) at Florida – I called the struggle but not the score for the Gators last week. That was bad. If Florida State wins by 50, Muschamp has to be gone. I partly think Winston’s mind might be on other things which could cause his performance to dip, but most times in these situations, players like him play better. It won’t be a 50 point win, but it will be a win for Florida State, continuing their joke of a schedule. EA Sports is on crack.

Wake Forest at Vanderbilt (-14.5) – This is the final year of this storied rivalry. Did you even know they’ve played 5 times in the last 6 years? Probably not, but expansion and the weird scheduling has seemingly ended this battle of gold and black nerds. Vandy will win the last one and get their 8th win of the year. EA Sports is on crack.

Georgia (-3) at Georgia Tech – Aaron Murray is done. Who is Georgia’s quarterback? Whoever it is, Vegas doesn’t think much of him. Georgia Tech always gives teams a little trouble with the triple option they run. It may actually be pretty close. Actually yeah, it will be. And Georgia Tech will win. EA Sports apparently knew about Murray’s injury as well.

Clemson at South Carolina (-5) – South Carolina has won four in a row in this rivalry. Clemson has supposedly been a national contender for the last two of those. South Carolina won those two by 10 and 21. The SEC is different isn’t it, Clemson? The streak goes to five, and gets Clemson out of Auburn’s way in the Harris and Coaches’ polls.

Tennessee (-4) at Kentucky – Wow, rough line for Tennessee. I mean it’s free money. But is Tennessee really that bad? No. Kentucky is bad. Really bad.

Texas A&M at Missouri (-4.5) – This is Missouri’s toughest test to date. Check out what week it is up there. 14. They beat Georgia at the Dawgs’ lowest point of injuries and people started looking. They beat Florida and people were on the bandwagon. They lost to the best team they’ve played so far, South Carolina, and people are still all on the Tigers. I mean, are they good? Yes. But not one of their “big” wins has ended up really meaning anything. People aren’t making the connection. Manziel ends the dream this weekend, which could possibly hurt Auburn a tad.

Alabama (-10.5) at Auburn – Check my game preview tomorrow for my score, but on NCAA 14, Alabama was 11-0 and ranked #1, while Auburn was 4-7. Boy were they wrong. And even wrong about their score prediction too. Though I give props that it was at least close.

Ohio State (-16) at Michigan – Tommy Tuberville will be at the Iron Bowl. Al Borges is coaching against the one team that stands in the way of Auburn getting a national championship game berth, if everything goes to plan. Fate isn’t a strong enough word for all that. But yeah, fate isn’t strong enough for anything to happen in this one, though.

Notre Dame at Stanford (-15) – Notre Dame is still playing football this year? Haven’t heard a thing about ’em. I guess I don’t watch NBC much. It won’t be close.

UCLA at USC (-3) – Who else is on the Ed Orgeron bandwagon?! MEEEEEE. I mean, I don’t really care, but it’s kinda cool to see how excited he is and how the team is responding. UCLA is pretty strong, but this will be a good game. USC will win at home and will be ranked #1 to start next season with 5 Heisman candidates on the roster.

Arizona at Arizona State (-12) – Well, beating the mess out of Oregon will get you no cred apparently. A twelve point underdog after blowing out a top 10 team? Eh, it was just one of those games. Arizona State wins big.

The ‘Blogler’s Back From L.A.

Arizona State struggled against UCLA late in the game. Arizona steamrolled Oregon on both offense and defense.
Current trend: If the Wildcats can maintain that same level of performance they will make their upstate rivals weep bitter tears.

Not sure if I’m imagining things, but I could’ve sworn UGA beat tech…

Apologies, I read your results on the game backwards