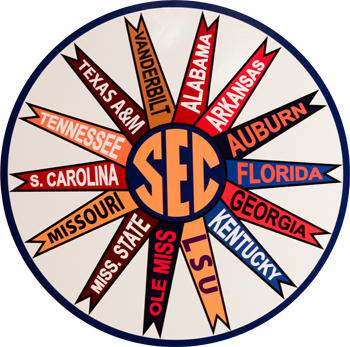 That being said, you still care what the players and coach says about the upcoming season, so I’ll do what the ‘Blogle was initially founded on: scouring the internet, finding every Auburn-related post or video imaginable, and bringing the best of those into one central location. I’ve broken each player and Coach Chizik into their own parts with videos of various interviews as well as articles that were written after those interviews.

There was nothing more than coach-speak and close to the vest answers from the players, but in the middle of July, anything about football will do.

Note: it’s obvious that Chizik told the players to give up nothing about the quarterback race that has been over since A-Day. It’s still “up for grabs.” Oh Chiz…

Chizik talks with the media about the summer, the new coordinators, the running backs, and Corey Lemonier:

Ivan Maisel of ESPN sat down, well actually stood next to, Coach Chizik and asked him a few questions.

Here are five pages of quotes from Chizik, from his opening statement to questions from the media.

After Lutzie’s interviews at Media Days, ESPN Blogger Edward Aschoff, then had this to say about the touchdown maker. This is the first line of the article: “Philip Lutzenkirchen doesn’t come close to resembling a diva.” I don’t know about all that. Maybe Ed hasn’t seen this.

Mark Schlabach, you know… this guy, spoke with Lutzenkirchen. Here’s the video.

Other quotes from Lutzenkirchen from throughout the day.

Blake talks a lot about the offense, including learning how to get in a huddle again:

After this interview, Low was inspired to write an article about how a healthy Blake will enhance the new Auburn offense.

Other quotes from Blake from through the day.

Corey Lemonier, and his much talked about bow tie, talks about Brian Van Gorder, saying that his style is more of an attack defense instead of Roof’s read-and-react. He also talks about true Auburn fans:

And again, ESPN has an interview with Lemonier, but they Bogart on the video-sharing capabilities, so here’s a boring ol’ link.

Other quotes from Lemonier from throughout the day.

So like I said, there was nothing too earth-shattering. At one point in the day Lutzenkirchen, said something about remembering Dabo’s post-game interview after the loss to Clemson last season, so that was somewhat good to see that he opened up a little bit and didn’t give the cliche “we are only worried about ourselves” line. I mean, it’s good to hear that a player has some fuel for revenge.

Chizik also noted that Zeke Pike can return if he does enough to get back on the team, so we’ll see if he Dyer’s or not.

Lastly, Tony Barnhart wrote a nice little piece about the 2011 and 2012 Auburn Tigers that says a lot more than “Auburn has always sucked without Cam Newton.” Have a read. It’s worth it.

From the Other Sideline – Georgia (Summer Edition)

If you didn’t want to be a member of the media, then you wouldn’t have applied for credentials.

For someone who is not a “media” member you put a lot of work into blogging. Thanks for your dedication and hard work. I read your stuff everyday.

Ok, let me rephrase. I don’t want to be a beat reporter or anything like that. I don’t want to have to ask coaches about the upcoming season, etc. I don’t want to work for a newspaper that tells me what I can and can’t say. I mean, I would. Call me, but I’d much rather just Blogle. I have never considered blogling about my opinion as a media-type thing, but I guess it technically is.

Speaking of Blogling… You misspelled “Blogle” in your second paragraph… Not to be nit-picky or anything, just pointing it out…

…but I will say it’s a good thing you don’t want to be a member of the media… Well, at least then you’d have an editor…haha. I kid, I kid. WDE.