Up until around the year 2000, most college football coaches wore a coat and tie on the sideline during games. Those more noble get-ups then took a backseat to polos, mock turtlenecks, and sweatshirts. Auburn coaches, being that the school is in a hotter climate and contracted with Under Armour, have worn “Heat Gear” polos since 2005. 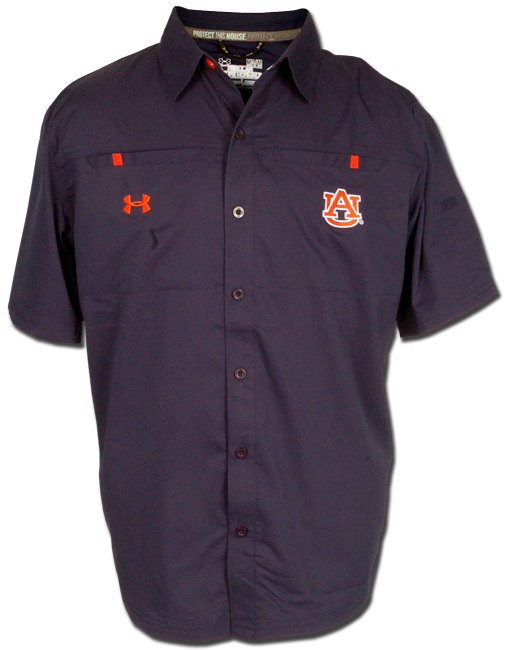 Gene Chizik’s fashion choices have been talked about all over the ‘Blogle. Whether it’s the shirt he stole from Disco Inferno‘s closet, the recycling of that shirt, or his customary white shacket (shirt jacket) with the huge AU logo on the back, he’s definitely not afraid to show where he came from: Florida in the 1970’s.

In general, Chizik is a pretty chill bro. Unless a player has just been penalized for unsportsmanlike conduct, he’s usually pretty reserved. It shows in his “just don’t care what you think about my clothes” attitude, and it shows even more with the new Tommy Bahama-style sideline shirts being sold at Tiger Rags for this season.

Nothing says chill or Chizik like a loose, thin, button down shirt that just won’t look right if you tuck it in. We got a glimpse at what the coaching staff may look like with this style of shirt on back during the first Tiger Prowl, but I always figured they would be reserved for summer coaching visits. Nope, it looks like it will be coming to a sideline in Jordan-Hare very soon.

I could be wrong, but Tiger Rags is calling this a “sideline shirt,” and coupled with what I was told about Chizik possibly having a “different” style shirt on the sideline this year, it makes sense. Technically, the shirt is called a “Sideline Contender Button Down,” so I guess Auburn is a contender this year. Take that, Phil Steele.

Typically, the shirts in the stores that are sold to the public are slightly different from what the coaches wear. We aren’t cool enough to get the exclusive stuff. Given that this one is pretty reserved, and by that I mean no crouching tigers or huge eagles, it gives Chizik the freedom to set the coaches apart from the public and really show their sense of style. I can’t wait to see what they come up with.

You can still get the normal orange or blue polos, and I assume the “beachy” shirt will be reserved for those early September kickoffs, or just when the Chiz wants to just let loose and cast a few lines after the game.

Update: Check out the warning about this shirt from the website.

– WARNING: This product will melt when exposed to extreme heat or open flames, posing a risk of serious injury where melted product comes into contact with skin.

I call the shacket the Gene Jacket

Tiger Rags only has small & medium, what’s up with that?
Sold out of everything else already?

Just curious, what does your DG mean?

It’s my initials, not the sorority.

I’ve never seen anything that screams Gene Chizik more than this and I’m ok with that.

I don’t think I’ve ever seen a piece of clothing come with this warning label…..

“WARNING: This product will melt when exposed to extreme heat or open flames, posing a risk of serious injury where melted product comes into contact with skin.” (per Tiger Rags website)

It’s there for firefighters and others who might work in that type of extreme heat. Under Armour material melts at a few hundred degrees and some firefighters found that out the hard way when they wore them as under shirts. It’s a part of many Fire Departments’ uniform policies now because apparently it hurts a lot. Calhoun Firefighter 531

You are have been packed to the brim with the WCW references lately.

Being roughly the same age as Coach Chizik, I will state firmly, in my opinion of course, that this is the best Auburn shirt EVER. First of all, UnderArmour gear is extremely comfortable to wear, especially in hot weather. Second, those of us in the Chizik age range are doomed to use reading glasses the rest of our lives. That makes shirt pockets invaluable and this is the first Auburn UnderArmour shirt with pockets. Third, one reason that Tiger Rags only has small and mediums is that I bought 2 large ones! (BTW, J&M has them also.) Finally, and this is related to the first, I wore my two shirts in New Orleans heat last week and even in that heat, these shirts are unbelievably comfortable. (Also picked up numerous “War Eagles”!)

So if Coach Chizik chooses to wear these on the sidelines, I’ll be thrilled. I only hope that these shirts will be available in orange!

This is classy. However, almost anything is better than those shackets that he wears! Ugh.