As of today, we are 93 days from the kickoff between the Clemson Tigers and your Auburn Tigers in the Chick-Fil-A Kickoff Classic at the Georgia Dome. But don’t tell that to whoever is in charge of the countdown clock in the Auburn weight room.

According to this picture that was tweeted at 6:52 yesterday evening by sophomore tight end Brandon Fulse, the countdown clock would end the night of August 30th, which is two days before the game actually begins. 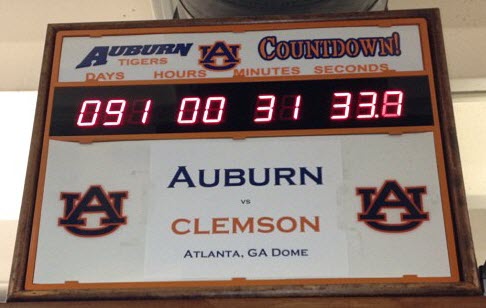 A tweet to Nosa Equae was returned, and he stated that he noticed the problem yesterday and he would be checking with the equipment managers to have it corrected. That is unless this was a ploy by the coaches to have the team think they have less time to prepare than they actually do. Or it could be the time that they leave to go to Atlanta. I don’t know, but this is pressing stuff.

You need answers, and I will do my best to solve the mystery of the “Countdown to Clemson that ends too early”. Keep it locked here for further details on this ongoing investigation.

ESPN’s Promo for the Auburn-LSU Game

My guess would be yours, that they have to be ready to go by the time that clock counts down to zero. Hey, are you going to talk about the hubbub going on over scheduling and games? Every time I turn on my sports talk radio, that is all they are talking about.

well it does not say that the kickoff is at that time on the sign, so maybe it is the day of the last full practice before the game.

Theory: Game starts when they get on the bus. They get in the zone, focused on doing what it takes to get the W. You thinking it begins at the kickoff? Nahhhhh. This is a BIG game. We can rebound after a loss here, but a win could be the beginning of a special season.