With Kentucky’s win over Kansas last night, the 2012 Bracket Challenge is now complete. Taking the top spot was Cody Walker, a junior at Auburn studying in Wildlife Sciences with a minor in Feminine Arts. I’m just kidding. I have no idea who Cody is or what he’s studying or if he’s studying. Therefore, Cody, get at me on Twitter or shoot me an email if you want to get your WarBlogle.com t-shirt and Auburn Survival Strap.

Brady and Jenna (an Auburn grad, but staunch Kentucky basketball fan), you win stuff too, so get in touch with me over the aforementioned mediums.

If anybody cares, I got 54th (a personal best), but only had one less correct pick than the winner. Stupid scoring system that benefits those that pick the later games correctly…

The first ever WarBlogle.com Celebrity/Blogger/Journalist Bracket Challenge was taken by Auburn baseball guru, and fellow O-town Killa, @AUPPL of Plainsman Parking Lot. He admittedly only watched a handful of games this year, most of those involving Auburn or Indiana.

This just goes to show that current basketball knowledge means absolutely jack when it comes to filling out a bracket. I mean, I’ve talked to this guy and he literally knows nothing, and I mean nothing about basketball. Take everything he knows about baseball, reverse it, multiply it by 50 and that’s how much he knows. He’s so dumb, that…ok I’m done. 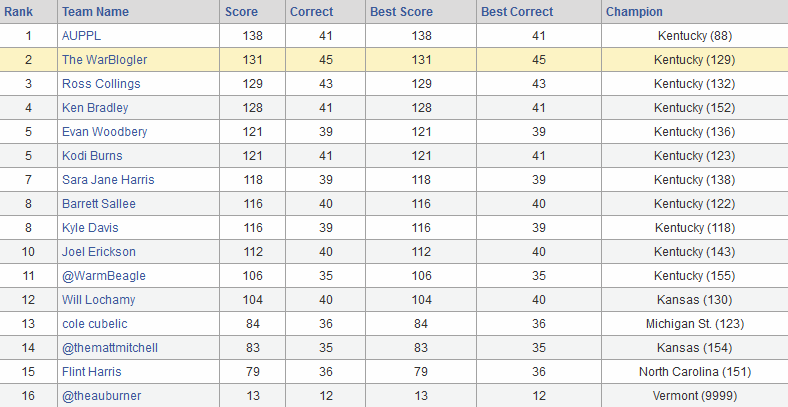 Congrats @AUPPL. You win your choice of a handshake, a hug, or a swift kick to the… nevermind. Oh, and if you’re wondering, I had the most correct picks in this one. If it wasn’t for that scoring system…

Thanks again to everyone who participated. We had a total of 405 total entries in the two combined groups, which is by far the most we’ve ever had. Congrats to the winners, and let’s do it again next year.

Highlights of Auburn’s 81-71 Win Over Missouri