What started out looking grim, turned into a somewhat expected and slightly acceptable signing class for the 2012 Auburn Tigers, and it might not be finished. You can read the minute-by-minute updates on the National Signing Day running post from yesterday, but let’s take a cleaner look at how the class panned out. 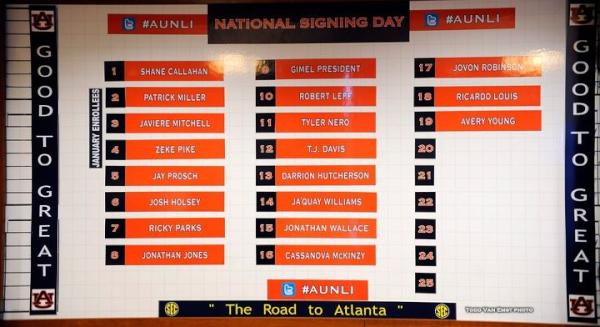 There are five players that are already at Auburn for the Spring semester:

Jay Prosch (FB, Jr.)
Transferred from Illinois
-Notes: Prosch is a Mobile native. His mother has been struggling with cancer recently, so he was granted a waiver to come closer to home. Illinois was moving to the spread, which didn’t bode well for his playing future, given that he is a mountain of muscle.
-Highlights:

Robert Leff (3-star OL)
Fairhope, AL (Fairhope HS)
-Other offers: Kentucky, Lousiana-Lafayette, Southern Miss
-Notes: Leff is big (6’6″), but he’ll need to gain some weight to play on a SEC offensive line. He got started on that last night when he tried to consume 7.5 pounds of seafood in an hour.
-Highlights:

Tyler Nero (4-star DT)
Atmore, AL (Escambia County HS)
-Other offers: Alabama, Arkansas, Arkansas State, Clemson, Florida, Florida State, Georgia, Illinois, Kentucky, South Alabama
-Notes: Another cool name that has been with Auburn all the way. He also seems to be one of a few guys who said no to Dameyune Craig at Florida State, and yes to Auburn instead.
-Highlights:

T.J. Davis (3-star CB)
Tallahassee, FL (Godby HS)
-Other offers: Alabama, Arkansas, Clemson, Florida, Florida Atlantic, Florida International, Florida State, Georgia, Georgia Tech, Illinois, Louisville, LSU, Miami, Mississippi, Nebraska, North Carolina, Notre Dame, Ohio State, South Carolina, South Florida, Southern Miss, TCU, Texas Tech, Vanderbilt, Wake Forest
-Notes: Remember when the Auburn planes were down in Tallahassee and we all thought it was because Chizik was talking to Mark Stoops about the defensive coordinator position? Yeah, he might have been, but it was probably just any Auburn coach talking to this guy. Do you think alums of Godby High school say “I went to Godby, by God”? I’ll ask T.J. when he gets on campus.
-Highlights:

Darrion Hutcherson (3-star TE)
Dadeville, AL (Dadeville HS)
-Other offers: Alabama, East Carolina, Louisville, Memphis, Mississippi, Mississippi State, Southern Miss, Utah, Vanderbilt
-Notes: Hutcherson’s family is all Alabama. He committed to Auburn and has helped recruit ever since. You have to like that. He’s a big guy that could play TE or DE.
-Highlights:

Jonathan Wallace (3-star QB)
Phenix City, AL (Central HS)
-Other offers: Alcorn State, Arkansas State, Florida International, Jacksonville State, Kent State, Memphis, Middle Tennessee State, Northern Illinois, South Alabama, Southern Miss, UCF, Western Kentucky
-Notes: Wallace was the only surprise on signing day, but only in the sense that we didn’t know that Chizik was looking for another quarterback. He was committed to UCF previously and obviously didn’t have many illustrious offers, but I’ve seen him play and he is fast. He may end up playing somewhere else other than QB.
-Highlights:

Ricardo Louis (4-star WR)
Miami Beach, FL (Miami Beach HS)
-Other offers: Alabama, East Carolina, Florida, Florida International, Florida State, Miami, Ohio State, South Carolina, South Florida, UCF
-Notes: Ricardo was Auburn all the way, but the delay in an offensive coordinator announcement gave ol’ Dameyune a chance to swoop in and steal his commitment. But once Loeffler was hired, Louis left the Noles, and picked the Tigers like he wanted to all along. He’ll play next season.
-Highlights:

Will Adams (3-star OL)
Tyrone, GA (Sandy Creek HS)
-Other offers: Buffalo, Georgia, Georgia Tech, Illinois, Kentucky, Louisville, Marshall, Memphis, South Alabama, Southern Miss
-Notes: Adams was a Georgia Tech commitment, but Auburn pushed late and got him. I’ve talked to one of his family members, and they said he is pumped about coming to Auburn. Evidently he was so excited that he forgot to fax in his LOI until later in the day, which explains why his name isn’t up on the recruiting board picture at the top of the post. Also, his dad was a USFL quarterback. So there’s that…
-Highlights:

Auburn is also in the running for two more guys that will be announcing in the coming days. Both would significantly boost this signing class.

–Alex Kozan (4-star OL) of Valor Christian HS (Castle Rock, CO) was committed to Iowa, but Auburn made a late push. Kozan ended up delaying his announcement yesterday and is now considering Iowa, Auburn, and Michigan. Some think that he waiting to see where Diamond goes.

All in all, this class met Auburn’s needs and did so in strong fashion. It is not the type of class of past years, but Auburn didn’t necessarily need that. Auburn has two top-5 classes on campus right now, most who got playing time last year and will be around for 2-3 more years. I guess it goes to show how successful you’ve been when fans are disappointed in a top 15 class. They would have killed for that five years ago.

Take another look at all of the other offers these kids received. Most were wanted all over country by every elite school. Don’t get caught up in the hats they chose from or if they even did an announcement. Yesterday may have not been exciting in terms of hat picking, etc. but that’s because Auburn had high profile guys already on campus or that were complete locks for months. The class is very strong regardless of what happened in front of a high school lunchroom yesterday.

Update: Would you look at that. Chizik and Bramblett pretty much say the exact same thing I just said in this recap of Signing Day:

We’ll see what happens with Diamond, Diggs, and Kozan, and I’ll update this post as their announcements come in. Thanks for reading yesterday. It was a banner day for the ‘Blogle.

Blogle, isn’t there some way we could get Dameyune Craig on our staff?

Why does this board only go to 25? The Bama board has way more slots… RECRUITING BOARD SLOT NATIONAL CHAMPIONS! WOOOOOOO!

Don’t write off Wallace because he wasn’t as highly recruited as some of the other kids we signed. I’m a teacher at CHS, and Wallace is one of the most outstanding young men that walk through our halls. He’s very smart; he’s adaptable; he’s willing to work and work hard. He would do well almost anywhere they decided to put him, though I agree that he probably won’t be playing QB for AU. I for one was VERY proud to see him sign with AU and was thrilled to hear him say, “War eagle!”

Dameyune Craig lies to recruits and drags AU through the mud to get them in at FSU. I loved the guy and know that is the landscape of college football recruiting, but in my book he can stay the heck away from Auburn.