Thanks to @epzilla, here’s a chart laying out the difference in the amounts of what the ones who attempt to defend their fan base after despicable actions of “just one crazy” call a “lunatic fringe fan.” We’ve seen more and more of these “rare” fans pop up over the past year with Harvey Updyke and the Teabagger of New Orleans. And while there may only be two major examples of these “fringe lunatics,” just listen to the callers of Finebaum today (also called the “lunatic fringe”) and hear the deflecting and downright defending of these two. It’s those people that help further the claim that the “fringe” may be the majority. 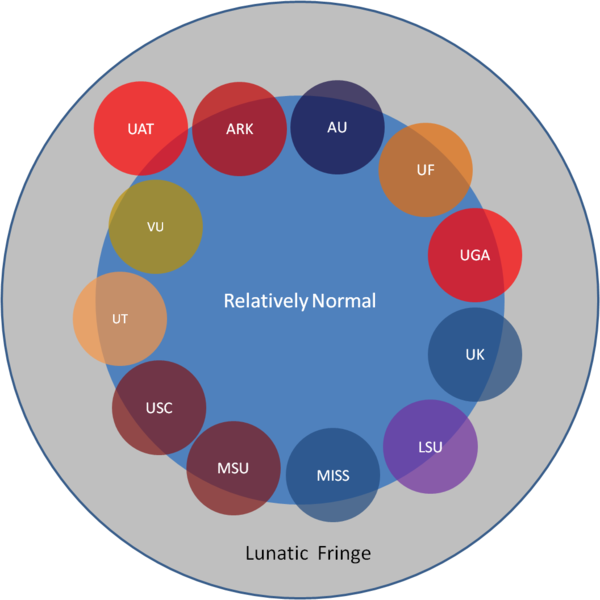 There’s one problem with using the term “fringe.” When most think of a fringe they think of the area surrounding a green in golf. It is the outermost area and takes up the least amount of space. However, according to the chart and reality in general, one team has most of their fanbase in that “fringe.” So technically, in regards to this one school, the “relatively normal” crowd would be the fringe, otherwise known as the minority.

I know there are decent ones out there, but it’s becoming far too obvious that there are less and less than they want you to believe. Again, two guys don’t make up a fan base, but the “they are just trees” and “he was just really drunk, we’ve all done it” crowd is much bigger than they’ll admit and only kills the argument altogether.

This has nothing to do with football, but for some reason allegiance to a team has caused a tree poisoner and a teabagger to be defended and in some cases applauded. If they took away the color of the shirt either was wearing, I would hope that they would see that both actions were sad and disgusting.

Let’s just take off the glasses, step back, and look at what happened. Can’t we all agree that neither instances really have anything to do with a football team, a school, or fan base, and just admit they are deplorable? Plus, if there was no defending, there would be no reason to lump the rare ones in together with all of the decent ones. Right?

Does Vanderbilt really have a lunatic fringe or is their fan base so small that proportion lying outside the “relatively normal” zone is representative of only one or two individuals? And I would really like to see the numbers here, because I certainly think there are more folks wearing pig helmets and more folks barking like dawgs than there are folks driving pickups and Trans-Ams with tiger tails around Alabama.

yes, they have that lunatic fringe element. When I went to the Vandy game when they beat Auburn a few years back, I encountered some. I sat right in the middle of old-money-Vandy fans. Vandy made a great Defensive tackle and I had an 80+ year old man 3 seats down put his finger in my face and ask, ‘Whaddya think about that Auburn boy!?’. Then, I had a whole slew of them try to get me kicked out of their section even though I had a ticket. Unreal lunatics. It was like being confronted by a bammer.

“It was like being confronted by a bammer.” Well said.

The closer I look at this, the more I think, that’s about right.

My belief is that bama fans in general are some of the the most susceptible to believing that their fandom makes THEM a champion and that their value as a person is higher than fans of other schools. This self-worth is amplified when their team has success on the field.

In their eyes, the victim is not a person. He is just an LSU fan – a vanquished foe, devoid of any dignity. They believe that violating him was their right as victors.

I agree that this is not ALL bama fans — or even a majority of them. But it is a much bigger slice of their pie than it is for other fan bases within the CFB.

They (not all) do lead sad lives, all centered around the wins and losses of 18 year olds. You could even say that they feel they have a sense of entitlement.

Where are the numbers and how was this assembled?

A complete mythical processes put together by an Burner.

You are missing a verb in there, T. Bagger. And even when placed you will still have problems with sentence structure and subject-verb agreement, i.e., there are processes and there can be a process. Maybe read and listen to hone your skills before putting your own two balls in the conversation.

Who needs numbers? LSU’s lunatic fringe is about 50% and Bammers are 90% of the UA population (The other 10 percent are actual graduates). Well placed Blogle