As you all know by now, ESPN’s College Gameday will be on campus for the Iron Bowl this weekend. This will be the 7th appearance by the show in Auburn, and 13th involving an Auburn game. Got 13? This will be Gameday’s 4th Iron Bowl, 2nd on Auburn’s campus (1995). The last time the Gameday bus rolled into Auburn was last season for the Clemson game. 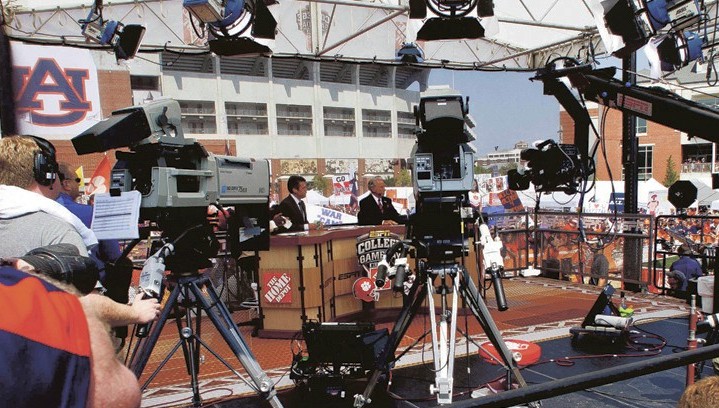 You will remember for that game that there was no guest picker, probably because nobody was in town for a game that was supposed to be nothing special. That should not be the case this season. I have no idea who it will be, but you’d have to think it will Charles Barkley or someone like that.

Even though Corso will likely pick Alabama, therefore putting on Big Al’s head, let me answer the question that I hear anytime Corso picks Auburn: why doesn’t he put on Aubie’s head? There are two reasons:

1) Aubie is an institution, only Aubie and friends of Aubie mess with Aubie. If you are not him, you can not try to be him, even if only for a few moments.

2) Plain and simple, Aubie, unlike almost all other mascots, does not have a detachable head. For Corso to try to do anything with the costume, he would have to put the full suit on, but going to back to #1, they would never let that happen.

Since I like to take the unconventional approach with most things, and since we all know that Iron Bowls aren’t decided by on-field stats and trends, I figured I’d take a look at how Auburn has done when College Gameday is outside the stadium to try to figure out how things will end up Saturday. I also threw a few of Alabama’s records at the bottom, where they belong.

Note: I count Iron Bowls at Legion Field as neutral, even though we know they were not, and other games Alabama played there as home games.

So if we look at the trends and the current situation with Auburn being the lower ranked team, in an Iron Bowl at home, things don’t look too bleak. Auburn is 2-2 at home when being the underdog and 1-0 in Iron Bowls at home. Alabama has a less than stellar record as the visiting team when Gameday is in town, but I just wish this one was in Tuscaloosa. 1-6? Woof!

So there you have it. Auburn will be just fine. It’s in the Gameday records.

If you would like to see my trip to Hell and back (AKA the time I went to Tuscaloosa to be on the Gameday set), you can view that here.

Cam Moves on to Round 2 of the Madden Cover Bracket

Every time I look, that’s all I see: a little hairy naked dude.

Good point. Forgot they stopped the neutral thing once they moved every other game to Auburn.

…you mean Aubie is just a guy in a suit…?

Hmmm, you know I swear I have an old photo of the original Aubie, Barry Mask, sitting in the bottom half of the suit with the head off…I’ll look for it over the holidays. Of course, that would have been 1979?80? so I’m sure the suit has evolved since then.

Oh, and before I forget…Happy Thanksgiving to the Blogle Family. This site has given us much to be thankful for in the last year.