I’ve said this once and I’ll say it again, when Auburn loses a football game, readership goes down and so does Tuesday Mailbag participation. Apparently a loss makes people lose interest in all things Auburn. Luckily, I had a few e-mails that hadn’t made the cut in previous weeks to use this week. Let’s not be so fairweather, how ’bout it? You can still read about Auburn following a loss. I do it all the time, and I’m still able to make it through the week.

Our first entry comes Caroline Blackburn, who snapped a picture of a questionable-at-best license plate. 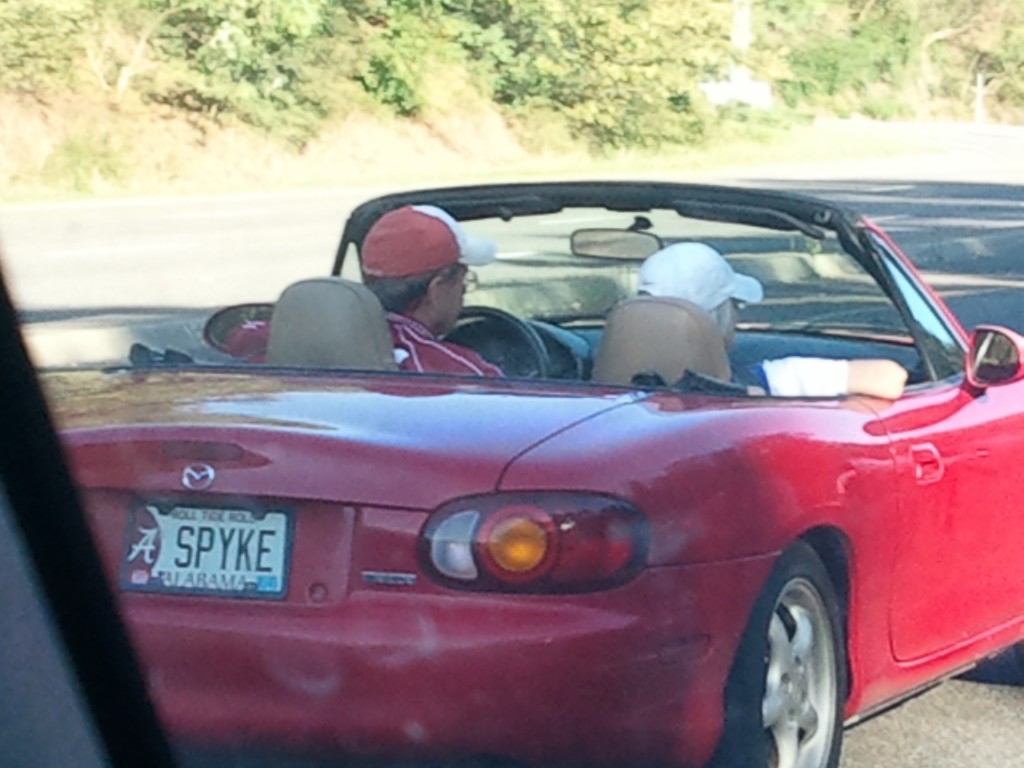 Driving home from work last Friday I passed this car. I literally could not believe what I was seeing. Surely this Bammer’s car tag doesn’t say “SPYKE” referring to the poison used on Toomer’s oaks. I was very annoyed, and after almost getting into a wreck I was able to take this picture. Once I got home to my household full of Bammers I showed this picture to my family. There were mixed reviews on the picture. One of my brothers (currently a junior at UA) claimed it was just the man’s nickname and surely it was a coincidence, while my Dad said “He’s a brave man for riding with his convertible top down.” Coincidence or not I thought this was worth sharing.

At first I thought this guy was just driving Harvey Updyke’s old car, but then I remembered Harvey drove a 2000 Kia. I have to agree with you, though. Although there’s a slight spelling difference, driving around with the Alabama “A” followed by anything close to “Spike,” is not the brightest thing in the world to do. Maybe that’s not actually a convertible. Maybe an angry Auburn fan just ripped the top of the car off. Maybe it was the same guy that beat Harvey up behind the gas station. Oh wait, that was a car door….

Jay Haywood wants to talk about the quarterback situation. Fine, I’ll tell you what I think.

Why do you think Moseley has not gotten any snaps, or a chance to show us what he has? Obviously Frazier is the future, but we cannot throw him to the wolves with great results. Why not put in Clint if Trotter is floundering?

I think Moseley hasn’t gotten any snaps (he actually got one last week) because the coaches do not think he is good enough to run the offense and win football games at Auburn. He has had his chance for two years to show the coaches that he can play. And maybe he can play, but at least as not as well as the others.

I may be putting my own opinions in this one, but they could also think that he doesn’t have the mental maturity or stability to play in an SEC football game. With the way he acted after learning that he did not win the starting job, maybe the coaches think that if he ever threw an interception or fumbled the ball, he woulnd’t be able to bounce back within by the time the next drive started.

I trust the coaches that just brought Auburn a National Championship wholeheartedly, and I trust they will make the right decisions regarding who should play. Besides, it is their job to study the players and their abilities full time. Nobody else knows what they know.

You may remember from last week that George W. Bush said “War Eagle” in a speech at Faulkner University. Justin heard him say it elsewhere as well.

Saw your tweet about GWB saying “War Eagle” at the Faulkner dinner.  I saw GWB speak at the BCA dinner a couple weeks ago.  He was asked about his most memorable visits to Alabama.  He mentioned visiting Enterprise after the tornado, the gulf coast after Katrina, then, warning that he was about to make half the room happy and half the room mad, he mentioned speaking at Auburn in 2002. He said that his first words were “War Eagle,” because he knew that no matter what he said after that, everyone would say it was the best speech ever given at Auburn.

After the crowd reaction, he continued by saying that he had lived in Alabama for 10 months while he was in the guard and he “gets it,” presumably meaning he gets the intensity of the rivalry. He then said something about liberal professors at Alabama that never liked him, drew some boos from the crowd, and smirked like he wanted to say more. Anyway, the sense I got was that he prefers Auburn to Alabama.

As a side note, I was at the AU-LSU game in 2002. It was a cool, drizzly day with an 11:30 kick.  LSU was heavily favored. Bush had spoken that week. They played the video of him saying “War Eagle” on the jumbotron, I’d conservatively estimate, about 100 times. Anyway, I credit GWB for the 31-7 Auburn win.

I’ve always thought that Bush would be an Auburn fan if he had to choose. I was in Plainsman Park the first time he uttered those two beautiful words in public. Here’s how I remember it:

I am the 2nd U.S. President to ever visit Auburn University. The first was Franklin Delano Roosevelt. I don’t know how he started his speech, but I know how I’m gonna start mine. Warrrr Eagle!

I don’t care if you’re Republican, Democrat, or whatever, that was awesome to hear. And yes, we won that game all because of the 100 times they played the video of GWB. I’m sure of it.

Ok, look. My wife, Beautiful Blogle, wanted to get in on the Mailbag fun, and she’s about to tell you something you might not expect, but just see her (and me) through.

A tale of a crossover…

I grew up an Alabama fan, and yes, WarBlogle still married me! I used to go to Alabama games as a little girl in my cheerleader outfit, sitting next to my dad while he explained each play to me. As I got older we quit going to as many games because my adolescence brought on too many other things to do on the weekends.

I did start going to a few Auburn games my freshman year of high school since my brother went to school down there, and I enjoyed Auburn’s campus and loved the atmosphere of the games. By the time I hit my senior year, I started to make the crossover from crimson to orange, and didn’t even apply to Alabama since I knew my heart was already in Auburn.

I think it took a while for my dad to fully grasp his paying for two of his kid’s tuitions, but hopefully now he’s realized how much we loved our college experience, plus since Auburn is so magical, my brother and I both met our spouses there, and now have 3 kids between the two of us! My dad, a true Alabama alum, even says “War Eagle” to all 5 of his grandkids, who are all of course big Auburn fans!

I am a true Auburn alum and fan now, and always will be, but I’ll always thank my dad for taking me to Alabama games with him and spending time with me, even though I don’t bleed crimson anymore.

Let me be clear. I had no idea of this travesty until we were married. Alright, I’m kidding. I found out on my wedding day. I just figured it was too late to call the whole thing off by then. Seriously though, everything she says is true, and I swear I’ve never seen any traces of Bammer coming from her. Not once. But if it ever does start to show, Baby Blogle and I are outta here.

Ok, I’m totally kidding about all of that (she made me type this).

Some guy named George that asked to be called Steve has a question about uniforms. You know I could talk about those all day.

When will we wear orange jerseys again?

People think that whatever has happened in the last 50 years is what will always and forever be. Think about how far the game has come since its beginning. Imagine what it’s going to be like in another 50 years. Football teams might not even wear uniforms by then. There may be some other sort of identification device. They might be floating on hover boards. We have no clue.

Over time, little tweaks will add up and Auburn’s uniforms may be completely different. I have a feeling new uniforms will become the norm and in another 50 years will actually be considered the traditional thing to do. Therefore, people in the 2050’s will look back at 2020 and look at whatever was worn during that time as the traditional uniform.

That was confusing, but I think you see where I’m going. Just don’t think Auburn will wear orange anytime soon.

Will Auburn Have Last Names on their Jerseys in 2012?

My wife and I just had our first child (a girl) three weeks ago. The thought crossed my mind, “What if she wants to go to bammer?” Yikes.

What will you do if BabyBlogle wants to go to bammer??

P.S. I’m the one starting the new position in Bammerham on Monday. I’ll tell you which company in email!

A loss absolutely does not make me lose interest BUT it does make looking at Auburn stuff a little painful for a few days.

When should we submit mailbag questions. I think I have a good one.

Email me at stuff@warblogle.com or click that “Contact the ‘Blogler” button at the top of the page.

A triple negative? I have no idea what you said here…

I do not think Moseley has not gotten any snaps (he actually got one last week) because the coaches do not think he is good enough to run the offense and win football games at Auburn.

Wow, that was confusing. Fixed it.

how about the fact that Spyke has the y-k-e just like Updyke. Coincidence? Probably. But I just want to believe that all those bammers are just that low class of a human.

is that wrong of me?

We tried orange jerseys during the time between Dye and Tuberville (the coach shall remain nameless). I was young during that time period but as I recall it did not go over well.

Great Mailbag reading! Thanks for the heads up. Also, valid point on the after effects of losing. I hate losing, period. It would really be cool if they played GWB saying War Eagle at least 50 times this Sat.

Regarding kids choosing where they want to go to college…..
I tell everyone that my boys can choose any college they want but they WILL be raised up as Auburn fans!
It’s up to me, to make sure they choose wisely!
War Eagle!

bammers license plate: I’m not surprised knowing some of the bammers I know. They’ll be disappointed to know that it’s taken.