What does that mean? Well, it means that both teams have given up a lot of points. It means that Auburn is capable of scoring as many points as they have given up, while the Owls are not. It also means that Florida Atlantic has been beaten by an average of 41 points. Not good.

Given Auburn’s low margin of victory in their two wins and the two touchdown defeat last week, the average is skewed to make it seem like Auburn has been outscored most of the season. That is obviously not true, but it does show that the average points scored and given up is very close. This week’s game should help Auburn out in terms of this statistic.

Auburn hasn’t really had any problem scoring points this season, the 2nd half of the Clemson game being the only exception. Even then, I believe the lack of points then wasn’t due to execution, but had more to do with a few strange play calls (I still love you with all my heart, Gus) and personnel choices (where was Dyer?). Those are obviously easy things to correct, so Auburn should have no problem scoring points on the Owls, but what about keeping the Owls from scoring…?

As rough as the defense has looked this season, the match-up with Florida Atlantic couldn’t come at a better time. Auburn is about to hit a very, very tough stretch of the season and is in dire need of a chance to make some major changes to fix the problems we’ve been cussing about for the last few weeks.

As I mentioned, Florida Atlantic has only mustered one field goal in two games this season. I fully expect Auburn’s defense to play much better than they did last week, but you’d think the Tigers could play even worse than they have and still be able to keep the scoring to a minimum.

Given that FAU is a lesser opponent with an offense that has yet to find the endzone, Auburn can almost treat this as a defensive practice. If Ted Roof wants to switch things up, play new players, try new schemes, or whatever, this is definitely the type of opponent to do it against.

The Auburn offense should score enough points that even if some new defensive scheme fails, it won’t matter in the end. If the Owls end up scoring their first three touchdowns of the season, but Roof can find something by the end of the game that will work for the rest of the season, then it wouldn’t bother me at all. 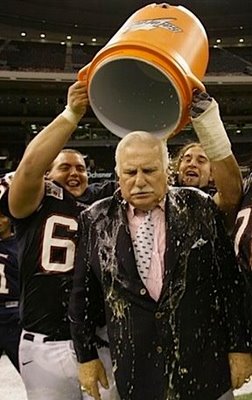 Now let’s talk about FAU’s head coach, Howard Schnellenberger. Schnellenberger was, of course, the head coach of the 1983 National Champion Miami Hurricanes that jumped from #5 to #1, leapfrogging Auburn, when they beat #1 Nebraska, whose last second, game-winning 2-point conversion attempt failed, in the Orange Bowl.

The #1 and #2 teams both lost their bowl game meaning that #3 Auburn should have moved up to the top spot after their Sugar Bowl win over Michigan. Instead, the voters moved the Hurricanes up four spots and ahead of Auburn.

You just thought 2004 was bad. Can you imagine this happening today? They better be glad I was just one year old in ’83.

If Howie knows what’s best for him, he’ll return that trophy to Jordan-Hare on Saturday. He should personally hand it to Coach Pat Dye and Al Del Greco in a midfield presentation before the game. Make it happen, Schnelly. It’s your last chance. I mean, you’re retiring after this season. You won’t even care any more this time next year.

If Shnellenberger complies, Coach Dye will send in the signal to have Auburn go easy on the Owls and keep the score respectable. Since we all know that won’t happen, the Tigers win big and get their defense a little better, but not perfect, on the way to a brutal, horrific, I-need-to-change-my-shorts October.