I don’t think I’ve ever talked about my love for the TV show Friday Night Lights on the ‘Blogle, but let me just say that it’s one of the best shows of all time. Now that the final season just wrapped up, I’m allowed to say that.

My favorite character on the show was none other than Tim Riggins. Riggins was the panty-dropping, drunk at practice, spent a few months in jail, running back for the Dillon Panthers. He ended up being a pretty nice guy that just had some issues, so it was hard not to love him. The women didn’t need as much convincing.

You may or may not be aware that ex-Tennessee Titans head coach, Jeff Fisher, has a son on the Tigers’ squad this year. Trent Fisher, a walk-on redshirt freshman safety, has recently been the focus of a few articles from the beat reporters due to the praise he has been receiving from the coaches.

It doesn’t seem like Fisher is anything like Tim Riggins, other than having that awesome I-have-long-hair-and-look-great-in-a-football-uniform-and-will-kill-you look. Have a look at the comparison yourself. I don’t know about you, but I just got butterflies. 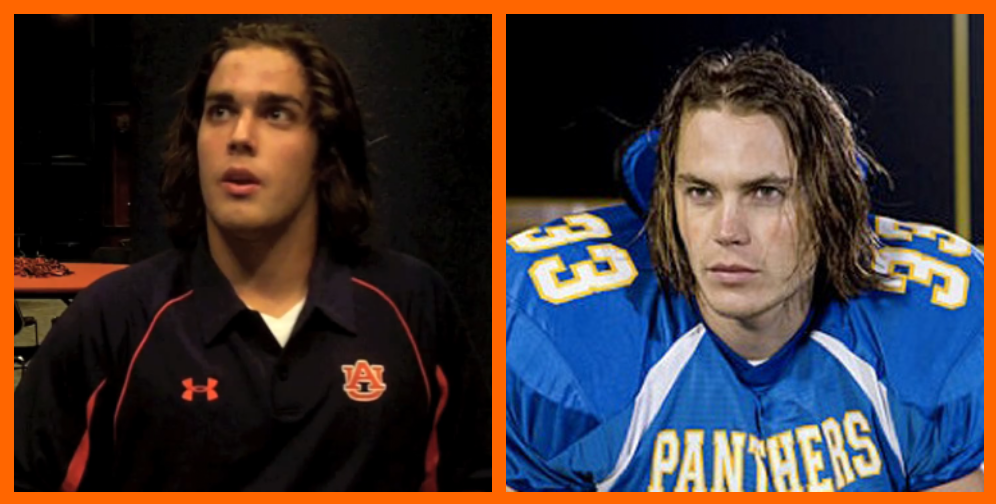 Thanks to @theWoodWDE for the graphic.

Thank goodness he learned how not to grow long hair from his Dad. Love me some Jeff Fisher, but dude loved the Kentucky Waterfall ( mullet ). Not to mention the Dad played at USC.

Clear eyes, full heart, can’t lose! Loved FNL, and I’m just crushed that it’s over. I’m catching the series on ESPN Classic, and I think I need to buy the series on DVD. Rumors are that they are talking about bring out a FNL movie to follow the Taylors in PA and the Dillon super team.

I enjoyed it ) Thanks for sharing such a blog)

As long as he just reminds you of Tim Riggins in looks. We do not want or need a Tim Riggins acting player!

[…] and watched him playfully get on a fan who thought he knew what he was talking about. I also talked Tim Riggins look-alike, Trent Fisher, to put a spin on Riggins's famous line from Friday Night Lights. Want to know how […]