Last Wednesday, as I was taking my seat in the press tent at the ESPYs, I pulled up Twitter and saw that the college football world was all abuzz over Pete Thamel’s latest report. The article seemingly uncovered a confrontation between Coach Gene Chizik and an NCAA rep that occurred at the end of May during the SEC coaches’ meetings in Destin, FL. Here’s how Thamel wrote it:

Julie Roe Lach, the N.C.A.A.’s vice president for enforcement, made a presentation to the group, which included every men’s basketball coach, football coach and athletic director in the conference. When she opened up the room for discussion, Auburn’s football coach, Gene Chizik, raised his hand first.

He peppered Roe Lach with a flurry of questions about the N.C.A.A.’s investigation into Cam Newton and why the N.C.A.A. had not publicly announced that the investigation was over. Chizik complained that the inquiry’s open-ended nature had hurt Auburn’s recruiting and he followed up at least three times, leading to a testy exchange.

“You’ll know when we’re finished,” Roe Lach told Chizik, according to several coaches who were at the meeting. “And we’re not finished.” 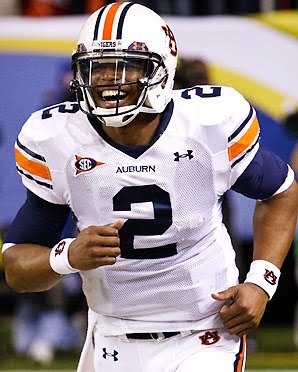 As expected, this had everyone but Auburn fans salivating. Somehow, those that are confident that Auburn cheated saw the report as proof that there was evidence to be found. All it really proved was that the investigation wasn’t closed, opening the door for those wishful thinkers to believe something bad was coming for Auburn. “So you’re telling me there’s a chance,” basically.

What’s important to note about the releasing of this article is that it came 45 days after the reported exchange. If you’re not good with calendars, that’s a month and a half, yet the headline read N.C.A.A. Inquiry of Auburn Isn’t Over, Exchange Reveals. That’s not entirely true. It could still be open now, but all we know is that it was open 45 days ago. And that’s all.

Now since the rest of the world is going off the assumption that what was true 45 days ago is also true now, let me do a little assuming with fact-based reasoning…

Since November, Rich McGlynn, Auburn’s senior associate athletics director for compliance, as well as anyone from the Auburn Athletic Department has shot down, ignored, and refused to acknowledge any question regarding Cam Newton and any investigations that may be related to him or his recruitment. It was their policy that they would not and could not talk about the issue until it was closed by the NCAA.

So why then around 18 days ago (early July), some 27 days after the Destin exchange, did McGlynn spill his guts to Auburn Undercover about the Cam Newton saga as he experienced it? It wouldn’t be a huge stretch to believe that since he was now talking then he could have been told that the investigation was over. Why wouldn’t Auburn announce it? Because they never received a formal letter of investigation from the NCAA. They have nothing to announce.

It’s possible that McGlynn may have only told Auburn Undercover what he was legally able to without getting into too much trouble. Or who knows, their policy might have changed. But I highly doubt it. This coaching staff and administration has been very tight-lipped about everything. It doesn’t make sense that just all of sudden the head compliance guy just starts talking unless something changed in regards to the NCAA.

You may have read Clay Travis’s little piece that he, just out of coincidence I’m sure, released on day 1 of SEC Media Days and day 1 of his new website. In it he claims that certain businessmen in Montgomery were being questioned as recent as late June as part of an investigation on Cam Newton. That’s good and all, but that would mean this supposed questioning fell on a date prior to McGlynn opening up about the investigation.

So let’s take one last look at the the order of events:

Late May: confrontation between Chizik and NCAA rep (according to Pete Thamel)

Late June: investigators in Montgomery (according to Clay Travis).

I may be way off. I may be missing something. But the timeline just doesn’t add up to show or prove that Auburn is still under investigation. In fact, of what we know for sure, it does nothing but the opposite.

Highlights of Auburn’s 55-0 over Alabama A&M

Thats the same argument for either side though. I am an Auburn fan, but i am in fear everything is going to be stripped from last season. We all know something under the table was going on, we just hope they don’t find it. But i just know they will.

What exactly do we know that was going on under the table?

“we all know something under the table was going on” Auburn fan??? Yea right. Pathetic

You are an Auburn fan’s butt, (man I wish I could spell). We all don’t know anything. You have something to share with the group?

Why dont you ask him off the record if the investigation is over?

Roger sounds like a bammer or miss state fan to me. That is just about the exact thought a miss state fan who I was talking to this weekend had.
As an actual Auburn fan, I am extremely confident that Chizik and the AU compliance staff are in the right.

I think they have not found, and will find nothing. I never worried much. Bunch of Auburn haters and media hype for the most part.

This is all soooo comical how butthurt people still are that Auburn did no wrong. Cam was not even that highly regarded except by the cheaters at Miss St! Auburn is so clean they are all grasping at straws!

Teamspeedkills was the only blogs to elaborate on the Sheridan allegations ( i.e. They listened to the finebaum piece & printed what he said in all it’s perplexing glory) & they got a month’s worth of hits in one day from it. That my friends is why the blessed individual’s name is so golden to sport’s reporters & bloggers. GT & LSU actually get put on probation & no one cares, but mention a 45 day old blurb involving Cam & it’s all over the interwebz.

As an sec fan this is disheartening. I begin to be scared more and more that we will turn into the southwest conference part 2. no team has ever been investigated for so long and been found completely innocent. i have reminded my auburn friends many times that tennessee flipped on alabama, and didnt get in trouble while the ncaa found no paper trail. sound familiar?

I’m sure the investigation is still going on. That doesn’t bother me. There is a difference, however, between what I think is going on and what bama fans think the investigation looks like. Bama fans tend to think that every day Mark Emmert finds a new receipt or some other piece of damning evidence and is just waiting to drop the hammer any day now. In reality, they are probably just taking their time exploring any lead and covering their bases before closing the case. Plus they probably have a lot going on outside of the Auburn investigation with GT, OSU, Oregon, LSU and what not which would do nothing but slow everything down. There is a difference between being under investigation and being guilty that some people just don’t seem to see.

In irony defined, Clay Travis’ first article on his new site was, of course, about the investigation, and while the bammers were quick to link to it, they overlooked the bit where he said:

“The NCAA’s ten-month investigation is further complicated by the continuing fount of allegations, many untrue, levied by Alabama fans in the state. “.

Wow, I didn’t even realize that the exchange happened that long before the article came out.. I feel so dumb

Haters will hate. The sports media convinced the world Auburn did something wrong. They are all still trying to save face and saying see its not over we might still be right.

If we were no longer under investigation, why would it be a secret? There is no question in my mind. It’s still on, but I am holding out for proof and facts knowing that the enemy could be fabricating false evidence even as I type.

Would like to hear your take on the Sheridan rumors yesterday.

You won’t be hearing anything about that here.

Alabama fans hate us. AU people and Paul is trying his best to make them happy but when football starts they will be sad again

As stated above, “Because they never received a formal letter of investigation from the NCAA. They have nothing to announce.”

Auburn has never commented on the NCAA investigation into Mississippi State’s recruitment of Cam Newton, so why start now?

How in the world can a two-bit oddsmaker (see: bookie) from Mobile have any sort of inside connection to the NCAA? Danny Sheridan is the latest homer to step up and stir the pot. He’s looking to make some money for his “business” this fall and used the Finebaum show as his platform.

This is just embarrassing. You talk about the other side grasping at straws?

They said they would let Auburn know when they were finished. Do you not think the coaching staff would be shouting it from the rooftops? Perhaps it is finished and they know there are sanctions coming.

I wish Auburn would sue the NCAA over hurt recruiting directly related to the open ended investigation!! NCAA is corrupt to the core this woman has no idea how an investigation is to be done and if they have not had sufficient time to build a case by now there is no case to be built. Send the letter close the investigation down or the fans may get together and file a class action against the NCAA!! Now THAT is a good idea!!!