Recently on Jeopardy, “What is Auburn University?” was the question for the answer below: 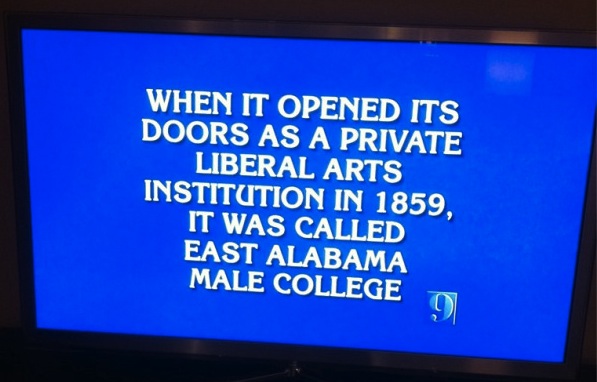 At first glance, I just thought it was cool that Auburn was mentioned on the world’s favorite trivia show, but after reading over it a few times, I noticed something strange. 1859? Was my Camp War Eagle counselor and my student recruiter wife lying to me? I thought it was 1856. It is 1856, right?

To confirm what I had beaten into my head those few days in the summer of 2000, I went to Auburn’s admissions website. Here’s what it says:

“Auburn University was established in 1856 as the East Alabama Male College, 20 years after the city of Auburn’s founding.”

See Trebek, you’re wrong and so is your mother. Or so I thought…I kept reading…

“In 1859, Auburn’s patrons erected and equipped a four-story building at the cost of $1,100 and opened its doors on October 1 to 80 students, six faculty members and a preparatory enrollment of 100. Five students were graduated after the first year.”

So the school was established in 1856, but didn’t actually educate anyone until 1859? Is that what I’m reading? What happened from 1856 to October 1859? Should we really say that Auburn started in 1859? And how do you graduate after one year? I should have gotten on that plan.

I’m sure someone out there knows the answers to these questions. If so, let me know in the comments below (that rhymed).

Tell Me About Your Auburn Dad

You could always call and ask FOY

Is the number still 8FoyFoy-Foy2FoyFoy?

Wow, how about those timestamps?

I’m pretty sure it is!

Graduating in 1 yr would mean 1 football season as a student. That’s why I opted for 5.

Established generally means that the state authorizes the university to open, therefore 1856 was probably the year the resolution was passed to start the University.

I dont know this for certain, but it would make sense to me that the university started educating students in 1856 but didn’t have classes inside the official Auburn University building until three years later. That is how students got diplomas after the first year of the building. They had taken four-years worth of classes, but only one after Auburn’s first building opened it’s doors.

It takes at least three years to get a diploma. Come on.

Those one-year-ers could have been transfer students. Or students that had collected credit from other places over a long period of time, and then finished up at the new EAMC, right? (weird, just realized the initials are the same as the Med Center).

Just wanted to say Auburn isn’t the only university to have this ‘issue.’ Most universities were founded about 5 years before they actually had students and held classes. The University of Virginia was founded in 1819, but didn’t hold its first class until 1825. And the education system during the Civil War was totally different from how it is today. Many men who were in the military, graduated after only a short time in school. Classes were much longer and students weren’t on a blocked schedule. Remember they didn’t have Christmas and summer break. Also, universities didn’t focus on electives, they focused on your major and that’s it. So if it didn’t pertain to what you were studying, you didn’t need to take it. And to answer your original question, yes, we should still say Auburn was founded in 1856. Sorry to be such a history nerd on the site, just wanted you to know it was common.

LOL And I know the Civil War was (1861-1865) and that AU was closed just giving the example for the men in the military for universities around the country during that era and why they graduated within a year many universities did that, because 99% of men were in service.

Another terrible coincidence. 1856-1859 is the range that my blood sugar level generally falls in.

As others have sort of said, the school recieved its charter in 1856, but opened in 1859. At least that is what wikipedia says. Wikipedia, another fine invention created by an Auburn man.

That is correct Updyke’s diabetes ,1856 was when the state legislature granted the charter. That was just the year they said “Sure you can start a university in the tiny town of Auburn.” Since we started as a private school under a methodist church it took them awhile to get it all together after the charter was granted. We turned public in 1872 when we received a land grant and they changed our name from the original EAMC to The Agriculture and Mechanical College of Alabama and forever more we would be a proud cow college with a darn good engineering school.