Yesterday afternoon, the SEC/ESPN released most of the start times for the first two weeks of the 2011 season. As I’m sure you know by now, Auburn’s opening tilt with the Aggies of Utah State, set to be played on September 3rd, was given the glorious start time of 11 am CDT and will be broadcasted on ESPN or ESPNU. I can’t think of a better way to start off the season than spending a summer morning/afternoon in 100 degree heat watching Auburn play an opponent such as Utah State. How about you?

The Tigers’ second game, a home match-up with Mississippi State and the fighting cowbell-ringing Mullens, was given the always coveted 11:21 am SEC Network (Who are we kidding? It’s still Jefferson-Pilot) game. Now I can understand the Utah State game being in the early, less desirable time slot, but not one of the early season SEC games with as many storylines that this one has.

The Auburn-Mississippi State rivalry has definitely taken a step up since last season with the Cam Newton stuff, Dan Mullen comparing the Toomer’s poisoning to the banning of cowbells, etc. With a good night time start, this would almost feel like an early Iron Bowl to me, but nooooo…. 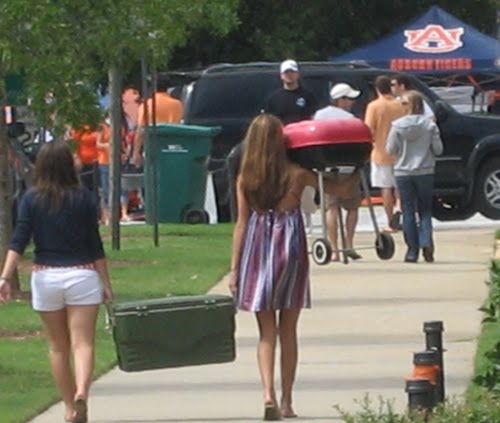 I know everybody thinks that 11 am games are tough on the home team, and maybe they are. The crowd usually isn’t fully awake and into it, it’s hotter than normal, and it’s usually against a lower opponent, but I think this idea is a little overblown. Yes, Auburn was run out of the stadium by Arkansas back in 2006 in an 11 am game, but other than some lackluster performances, there haven’t been many losses. Auburn hasn’t played that many early games at home in the last two years (only 3), but I just don’t see anything like that happening with a Chizik-coached team.

So, I don’t buy into the early game jinx, and I don’t really, really care about the heat. It’s hot. Get over it. My main problem with early start times is that it pretty much ruins the chance for a good tailgate/gameday experience. Who cares if we’re playing Utah State? If I’m given a chance to be in Auburn, grilling, watching games, hanging out under a tent, etc., I’m fine. That’s really all I want. The games are fun, but just being able to spend a day based around Auburn football is what I really love to do. And no, post-game tailgating doesn’t do it for me. I’m not confident/cocky enough to plan for it, because if Auburn loses it ain’t happening. So why plan to hang out after if you don’t know if it’s going to happen or not?

Because of these terrible time slots, and the deplorable odd-year home schedule, it is likely that Auburn will not have a home game start after 1 pm CST (I’m assuming FAU’s start time) until the 7th game of the season (vs. Florida). Seventh. SEVENTH! OCTOBER FREAKING 15TH!

I have no idea how I’m going to last till then. It’s somewhat possible that both teams could still have a decent record by then, meaning the game would be very pivotal to each team’s season, and on top of that, given that I will have had no proper gameday experience until the middle of October, I might just do the whole thing naked.

Alright, so I’ll stop whining now. The games are set. The whole point is to win, not provide an entertainment platform the ‘Blogler outside of the stadium. I just…no I’m not going to say it. I just…stop. I know everyone expects us to be terrible, but the defending National Champions should not have to play 11 am games with the Vanderbilt’s and Mississippi State’s of the world. There I said it. Am I elitist, now? You dang right. I’m a National Champion.

Early games do not hurt the home team. It just takes away the home field advantage. Student section and many alums drink the night before and getting up and to the stadium is a major burden. (We are not LSU fans). Also hard on fans who like to travel the day of the game. We played on a short week last year for Miss State to televise a Thur game for those Cowbell “Cheating” fans in starkville.. now we are playing early so its easier on them bc they play that next Thursday? Dont schedule a Thursday game…. This is a tough schedule year and we are not making it easier on our players.
Devils advocate if we win Miss State our team will be use to the heat and early start time going up to Clemson the following week. Miss State is better than Clemson though. games 2 and 3 will define our season.
Still cant believe he compared cowbells to Toomers Oaks.

Coach Chizik did away with the early kickoff blues, back during the Outback Bowl. Just like a lot of other “old wives tales” this one is B_U_S_T_E_D!

It is simply a disrespect to the National Champions, and that’s not elitist. Still us against the world, and I like it like that. WAR EAGLE!!!!

The problem I have is the heat. My daughter, who buys season tickets every year (4 this year) has multiple sclerosis, and heat causes very extreme physical problems ro MS patients. If temps are 95+, she may not even be able to attend.

If you’re gonna do the 7th game naked, go all out: Make that the Airbrush Game.

I think you are dead wrong about the FAU game. It will likely be on ESPNU or Fox, meaning a night game. That has historically been the case the last two years.

I think we can throw history out the window. Utah State is right up the same alley as La Tech, Ball State, and Arkansas State, which were all 6pm Fox games.

Understood, but the contracts only allow for us to have one PPV game a year now. You can go ahead and pencil that in for Samford, meaning a TV game. Plus AU is on the record as saying they prefer night games in December. But being the “FIRST” ESPN game on the first Saturday of the new season is too much to pass up.

I’m with you on this one. When I was a student back in the mid-80s, seems there were lots of early kickoffs. Standing in line for student tickets at 9 am with a pounding hangover in 100 degree heat was not fun. On the bright side, however, we did have time after the games to go home and rest up for Saturday night!

Always happy to be in Auburn regardless of the time. We have enjoyed walking around the campus before some of these early games. Not so much of a crowd….a totally different atmosphere.

I agree early Kickoffs are terrible. The main reason is 3 hours in 98 degree August sun. Secondly, if you look at the record since 2005 (chart below) Auburn has a 57% winning record with starts 12 AM and before against BCS teams.