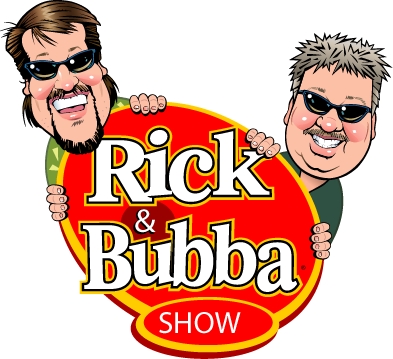 Last Thursday, I went to lunch with Larry (yes, that Larry) and a few coworkers. We went to a new place in town called Shane’s Rib Shack. It wasn’t much of a shack because it was part of a strip mall, but that’s beside the point. Oh, side note: the last meal I ate before Auburn won the National Championship was from Shane’s Rib Shack (also in a strip mall-type place) outside Phoenix Stadium in Glendale.

Anyway, while standing in line, I noticed that Rick Burgess of the Rick & Bubba Show was filling up his drink. Just behind him was his son, and Auburn Tiger, Blake Burgess. How do I know this? I’ve listened to the show almost every weekday for the past 5-6 years and have seen pictures of Blake on the show’s website, etc. Not to mention, I like Auburn football a lot (who knew?), and I know who most everybody is on the team, regardless of who they are or if they are the 2nd-string center.

Next, I turned to Larry and said “Hey look, there’s Rick and Blake Burgess. Should I give them a ‘War Eagle’?” Larry said something along of the lines of “Heck yes, you should.”

So I got my drink, and began my walk to our table. Larry was in front of me and I know now that he gave Blake a ‘War Eagle.’ Without knowing that it might seem a little weird to be the second random guy to walk by and throw out a ‘War Eagle’, I did the same.

When I got to my table, I tweeted this:

Pretty straight forward, right? Well, I mean, I guess it could be taken as I gave him a hearty ‘War Eagle’, or he gave me a hearty ‘War Eagle.’ However, as the title suggests, Rick (and/or Blake) didn’t take it that way. In fact, the whole thing was so strange to Rick that he talked about it on the next day’s show. You can listen below:

It’s not a huge deal that he got it almost completely wrong. Somewhere along the line the tweet just got modified in someone’s brain. It’s not Rick’s fault. I just don’t want anyone thinking I’m some crazed Auburn fan that was sending other crazed Auburn fans to Shane’s Rib Shack so they could tell Blake ‘War Eagle’.

As far I know, Larry and I were the only ones. Maybe it was weird that we just walked by his table en route to our table and said those two beautiful words rather than stopping by for a conversation, but I don’t like to bother people while they’re eating. I just wanted to give Blake a little Auburn love and show him that we know who he was and that we support him.

After lunch, Rick, Larry, and I all happened to be outside, so we talked a little bit. Rick and Larry were in the middle of discussing how they can still take their boys no matter how big they get when Blake came out of the “shack” looking at his phone. He was laughing at what I now know was the misunderstood tweet or at least someone telling him about it.

So yeah, pretty funny stuff. It seems the tweets that get the most attention are the ones that are taken the wrong way, but hey, what’s that they say about any pub being good pub?

Rick, Bubba, Speedy: I’m here if you’d like to talk it out on the show. I’d hate to ruin your story because it was a good segment, but I’d love to set the record straight…oh, and War Eagle.

Update: That was quick. I emailed this post to Rick, Bubba, and the rest of the guys, and already got a response from Rick himself:

Thanks, I didn’t think it was a negative at all……we actually loved it….i hope you didn’t take it the wrong way…..i thought it was really cool

Well then, I guess it’s cleared up. The title didn’t stay relevant for long.

Update #2: Bubba and Speedy have responded as well.

This is great…thank you so much for sending it to me.  – Speedy

Knew I liked you WarBlogler! Huge R&B fan, but don’t get it live in the ATL any more, so I have to listen on XM when I’m out and about. Sorry they made your WE sound odd. Rick just doesn’t “get” Twitter!

It sounds like Rick doensn’t get “War Eagle” or twitter. Why would he make such a big deal out of a little War Eagle? Its like hello. Instead of making such an issue out of someone recognizing his son, he should take it as a compliment that he was recognized as an Auburn Tiger (backup or not) and be proud.

The part that makes no sense at all is all this is coming from the show that encourages it’s fans to yell “Stay in it” at any and all awkward times and situations. They even have had contests for people to get “stay in it” signs and stuff on football game broadcasts.
Not to mention I think I have heard them talk about it being annoying when people bother them while they are eating, maybe that was someone else, not sure.
Either way, Rick Burgess is a huge over-exaggerator anyway, so of course if 2 people say war eagle, when he tells the story the first time, it will have been 20, and next time he talks about it it will have been 200.

Sounds to me that Rick Burgess doesn’t “get” Auburn and he thinks that the people in his listening audience don’t know that Auburns saying is “War Eagle!!!” Where the heck does he think his listening audience is? North Korea? Can’t wait to see him at the ball park so I can give him a “crazed Auburn hearty War Eagle” Like the bammers don’t call up their buddy’s while their on the pot and say “Roll Tide.” Whatever.

Oh and by the way Shane’s is as awesome as Auburn. WAR EAGLE!!!!