I’m changing the WarBlogle.com Poll a little bit this year. I have decided that I’m only going to rank the the Top 12 teams because who cares who’s ranked #22 at this point of the season, right? Plus, I just don’t want to have to figure out if I think that Miami is better than Virginia Tech. By the way, it’s a crock that the Hokies are ranked in the AP and Coaches’ polls, with two losses, one of which came to James Madison.

Anyway, I’m also going to take out the ugly table layout that I had last year that made it almost impossible to read on mobile devices. This year, I’m giving you a simple list, with a short explanation of the ranking. However, just like last year, you will notice an obvious difference in teams and order when compared to the major polls. I don’t rank based on where teams started, which is why I wait until the eighth week of the season. I also don’t follow the unwritten rules of poll-making like having to move a team down after a loss, or the idea that if a #5 lost to a #10 so they must drop at least five spots.

Here are the very simple rules/questions of the WarBlogle.com Poll:

So without further adieu, I give you the very first WarBlogle.com Poll of 2010. Tell me how stupid I am, and list your rankings in the comments section.

1. Auburn – Yeah right! You are such a homer! Best team in the nation?! This blog sucks…. Are you done? Now, can you tell me any reason why Auburn shouldn’t be ranked #1 in the nation right now? They have found a way to win every week, their offense is clicking and only getting stronger, and as bad their secondary has looked, they still passed the tests, and won’t face a tougher one than they defended last week. 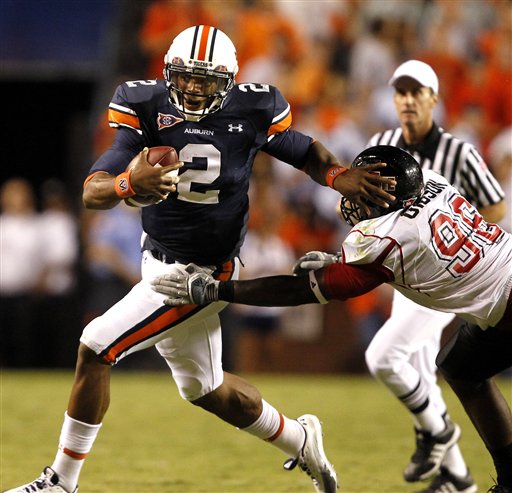 I honestly couldn’t tell you if the Tigers would beat Oregon nine times out of ten, but I can tell you that more points would be scored in that game than there were this past weekend. So following my poll rules, I’ll go off what has been proven.

Oregon’s wins have come against Stanford and a bunch of nobodies who’s records are a combined 13-24. Auburn has beaten two teams near the top of the best conference in the nation and their opponents’ records are 25-20. They have also beaten three teams in the current AP and Coaches’  Top 25. No other team in that nation can say that. Having the best player in the nation in the best conference doesn’t hurt your resume either. It’s close, but the proof is in the pudding…and the schedules.

Note: For some reason, other Auburn bloggers and fans think it’s crazy to say Auburn is the best team in the nation, like Auburn hasn’t done enough to prove their worth. Or that “going out a limb” isn’t what Auburn fans do. I’m not being cocky, I’m not being a homer, and I’m not bragging. Based on what I have seen, I do not see any team stopping Cam Newton or beating Auburn right now. There is no voodoo. There is no jinx. Just say what you feel, and don’t be scared of Bammers calling you an idiot. They would do that anyway.

2. Oregon – As much as I bashed Oregon’s schedule in Auburn’s blurb, I still think they could take Oklahoma and any other team in the nation. They are fast, very fast. Maybe they should check those wings on their uniforms. Are those regulation anyway?

3. Oklahoma – I really don’t want to put the Sooners this high. They have benefited from a soft schedule, a big win over Florida State, and other teams losing, but I still think they would beat any team below them.

4. TCU – As much as I bash the non-BCS teams for trying to get into the big boy party, it is hard to deny when “little teams” dominate their inferior opponents from start to finish with players that look like they could play on an SEC team.

6. LSU – The Bengal Tigers should have two or three losses, and would not be ranked in the WarBlogle.com Poll, but like Auburn they have found a way to win every week. They have just done it in the opposite way: lousy offense and stellar defense.

7. Alabama – This team just isn’t as good as last year’s. When they realize that and start relying on different aspects of their team, they may beat Ole Miss by more than 13 points. That’s only 12 more than Jacksonville State by the way.

8. Michigan State – This ranking probably won’t last too long. The Spartans haven’t left the state of Michigan for a game yet, and eventually playing for your coach gets trumped by talent and superior opponents, but right now they have shown enough for me to believe they could beat most teams below them.

9. Utah – This is a tough one. The Utes are undefeated and have beaten Pitt, but just like TCU and Boise State, we don’t really know how good they are. They are a few spots down from other little guys for only beating Wyoming by 24. Boise State beat the Cowboys by 45. Margin of victory is a small factor in the WarBlogle.com poll.

10. Iowa – The Hawkeyes will win the Big 10, which puts them at the 10th best team in the nation. That might even be a little high. Yes, I realize that Michigan State is ranked higher right now, but I told you that ranking won’t last that long.

11. Stanford – The Cardinal hung with what I think is the 2nd best team in the nation for most of the game, and probably won’t lose again.

12. Oklahoma State – The Cowboys are undefeated and have the best receiver in the nation, but the other polls have them low because they started the season unranked. That is not so in the WarBlogle.com poll. You win and you jump teams that were given something they did not deserve.

A Tale of Toomer’s Tragedy

Yeah right! You are such a homer! Best team in the nation?! This blog sucks….