Update #3: Here are a few clips from the press conference that was held earlier today, as well as a few updated statements from the school.

Update #2: Well looky here. WTVM has the mugshot. Yep, definitely the guy from that facebook profile. Have fun Harvey. 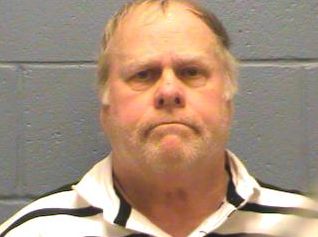 Update: Multiple stations are reporting that an arrest was made last night and there will be a press conference held outside Samford Hall at 10:30 am CT to discuss the investigation. The name of the arrested man has been leaked: Harvey Almorn Updyke. So technically his name is Al, I guess. This facebook profile has been floating around as well.

Supposedly, Bammers that know him outed him on a few message boards. Same name, Bama hat, retired Texas State Trooper (he said he used to live in Texas on the call). Yep, pretty sure that’s the guy.

On January 27th, 2011, “Al from Dadeville” called into The Paul Finebaum Show and boasted that he had poisoned the oak trees at Toomer’s Corner on the weekend after the Iron Bowl. His reasoning behind doing this was the fact that he claimed that Auburn students had rolled Toomer’s Corner on the day that Bear Bryant died (which Finebaum immediately shot down), and the fact that an Auburn fan put a “Scam” Newton jersey on Bryant’s statue in Tuscaloosa.

Finebaum obviously didn’t take this claim very seriously, given the way the call had already gone and given the fact that he hears this kind of nonsense all the time, not to mention the fact that it sounds so unbelievable. Here is the full audio of the call. You’ll be able to tell quickly that Al is a winner.

Unbeknownst to most, Auburn took this claim seriously and immediately had samples of the soil taken for testing. Sure enough, they found lethal amounts of an herbicide called Spike 80DF. The funny thing to me is that the samples had to be sent to Mississippi State because of a small fire at Auburn’s testing facility. You know they love helping Auburn with stuff right about now. You can read Auburn’s full release here.

As I listened to Finebaum’s show this afternoon, all but one Bama fan was mortified that this has happened. They were mad and embarrassed. After hearing that, I felt like giving them a pass and chalking it up to just one crazy. That was until I checked Twitter, Facebook, and a few message boards. It turns out, as we all expected, that most Bama fans were being their truly classy selves and actually agreed with, or were making fun of this whole situation. 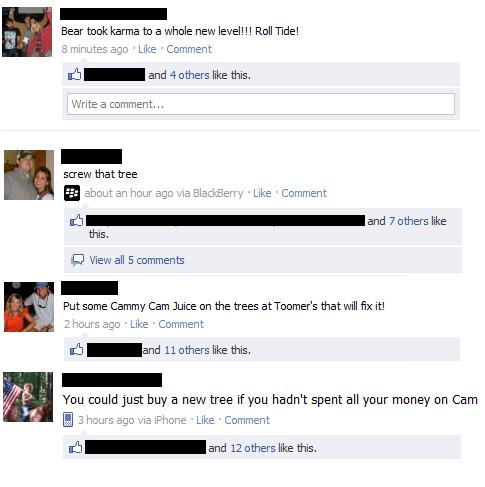 I know this isn’t the entire fan base, but it’s definitely not just one crazy guy. On the other hand, the better hand, Auburn students were out in full force rolling the tree as she would have it (pic from @riley_joe): 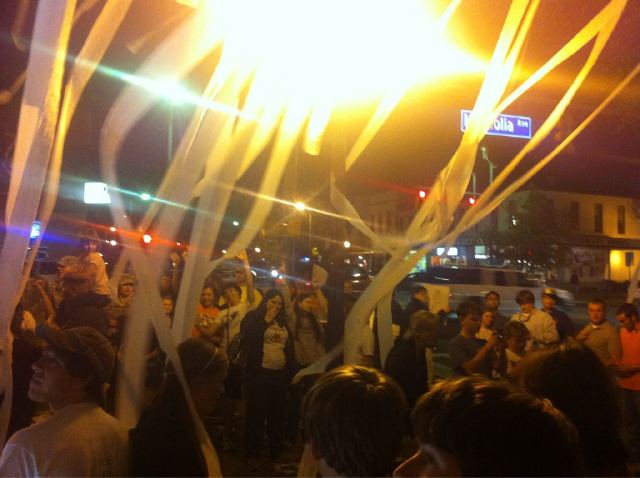 Stay tuned. According to WTVM of Columbus, Auburn’s Chief of Police said there could be an arrest made tonight. Let’s hope so. I’ll keep you updated.

This is absolutely disgusting. I heard that call on Finebaum as I was driving home from work. At the time I certainly didn’t take it seriously as his show has more than its own amount of knuckleheads that call in on a daily basis. However, I do recall thinking that it would be absolutely horrible if someone did poison those beautiful trees. What a disgrace! Those trees are an icon to the campus and city of Auburn. To say I’m appalled is a gross understatement.

My granddaughter said it best: THANKS to the tard(s) who have poisoned the oak trees on Toomers Corner in Auburn. Just can’t take that Auburn won, can you? Well what you’ve shown, though I’m not an avid sports fan, is VERY poor sportsmanship and I hope you are ashamed of yourself because not only have you hurt Auburn and the fans and players, you’ve hurt nature…And nature did not one thing to deserve this unjust punishment.

These bammers will have a black eye after all this. They know not what they are doing to themselves. Is the Iron Bowl game really worth this? Sick!

If you saw the comments on al.com before they removed every other one, they were ugly. Really ugly. I honestly thought this would be the end of this rivalry because this creates a ceiling, proving that there is something that can be done where no one from either side approves. Thats not the case though, and the only alternative comes pretty close to total war

Just yesterday one of my oldest friends and a fellow Auburn grad sent me an email mentioning the constant bitching, moaning and complaining she overhears from co-workers who are Bama fans. She says they are obsessed with Auburn’s championship season, saying things like our victory over Bama is what propelled us to the top of standings and the National Championship (conveniently forgetting that Bama was not very impressive with multiple SEC losses).

Obviously, the Bammers have gone feral with the reality of Auburn’s undefeated season, National Championship and the beat-down in T-town. But killing trees? That’s gone too far. This makes me sick.

Putting a shirt on Bear hardly qualifies for such retaliation. Now, had the Bear’s statue disappeared for months, and then was found beheaded and painted orange and blue in the parking lot of Bryant-Denny, well, then maybe…

I am sitting here, reading all this, and am at a loss for words. REALLY?
Poisoning the trees is not a harmless prank, it is a FELONY!!!! Not to mention a tragedy. I actually feel sorry for the heartless BUMMER(read bammer)fans who are championing this idiot’s crime.

Looks like Auburn may have a lake home soon.

Also, is anyone interested in filing a lawsuit against this guy? If the trees die, we can all band together and sue him for something like “lack of enjoyment of historical value” or something like that. I am in Georgia so we need an attorney in Alabama who will take this. It won’t go anywhere but it will make a statement that you don’t mess with Auburn.

…unless that’s the number to a State-owned payphone, I don’t think he’ll be answering that phone any time soon. Haha

[…] I just hope someone is guarding Toomer's or any other landmark on Auburn's campus. We all remember what happened the last time something like this […]