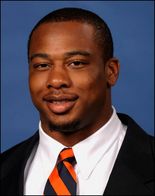 Current SEC Defensive Player of the Week Craig Stevens was kind enough to answer a few questions the ‘Blogle this week. #46 was an integral part of the defense in the win over West Virginia when he amassed a career-high 11 tackles along with an interception returned for a touchdown. The junior from Tallahassee, FL talks about his thoughts on Coach Gene Chizik, the offense, the defense, and little more in this WarBlogle.com Exclusive Player Interview.

1. What were your first thoughts when you heard Gene Chizik was hired, and now three games into the season, how have your thoughts changed?

I didn’t really know what to think about him at first because the only thing I knew was that he was a d-coordinator here a couple of years before and at Texas and he did well at both places. I didn’t know about his coaching style or anything but now that he’s here I really enjoy him and the staff because they treat us the same as they would family and and want the best for us on and off the field.

2. Did you ever have thoughts of transferring after the coaching change?

3. Now to this year, has the offense’s fast start surprised you at all?

No, seeing it everyday it doesn’t surprise me at all.

4. What do you think is the defense’s biggest strength/weakness?

Our speed has to be our biggest strength, we can’t show any weakness on the football field.

5. From Auburn’s current roster, who would be most likely to win the Heisman trophy in his career?

I don’t know about the Heisman, but I think Neiko Thorpe will be up for the Thorpe.

6. Who is one player we may not know of now, but we’ll definitely be hearing his name in the future?

Tyrik Rollison will be a great QB in the near future.

7. What is your favorite thing about playing football for Auburn?

I love the gameday atmosphere from Tigerwalk all the way until I get home from the game.

8. Which former player did you look up to as a freshman and why?

Will Herring and Karibi Dede because they were the vets of the LB group and I just tried to learn a lot from them.

9. Which pro player do you think you could be compared to?

I don’t like comparing myself to other people, but I’ve heard that I have somewhat of the same frame as Karlos Dansby.

10. What’s one thing most people don’t know about you?

I’ll be the first in my family to earn a degree from a University.

11. Who’s the best dancer/singer on the team?

We don’t have any good ones now, everybody’s just average, but Tyrone Green was the best singer last year hands down.

12. What were your first thoughts when you caught the interception, and after you had scored?

My first thought when I got it was “get in the endzone”, after I scored I was just thinking “Yes! I hope they dont make me run down on this next kickoff!”