On national television (ESPN), on senior night, on ‘trophy-come-home’ night, on the road with a liquored up, raucous, ‘Football, Football, Football’ crowd, Auburn came back from a 13 point deficit with just under 15 minutes left to beat the Tahd 77-73. As nonhomerish as possible, the refs were definitely playing for the crowd. Here’s the stat: Alabama 29 FTs, Auburn 12. Pretty ridiculous. Anyway, we won, so I don’t care. 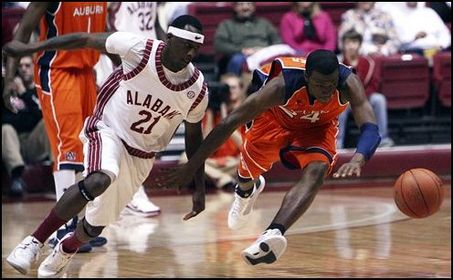 A win over LSU this Saturday seriously should get us in on the bubble talk. A win over either Florida or Kentucky in the second round of the SEC tourney should really push us in. ESPN won’t think so, but the last time we got in, 2003, we were never mentioned by the talking heads and then rode our 10-seed all the way to the Sweet Sixteen with a victory over 2-seed Wake Forest and losing to eventual-National Champ Syracuse by one point.

I say if we get two more wins (22 total), either with one over LSU and one win in the tourney, or a loss to LSU and two wins in the SEC tourney, then we’re in the Big Dance. ESPN’s bracketologists don’t know what they’re talking about.

Anyway, huge win tonight, and let’s hope the Tigers (not the purple ones) can keep it going against LSU this weekend. They beat us by seven (mostly end game foul shots), but we had a chance to take the lead with a minute to go a week ago down on the bayou. I think tonight’s win will get people out of their houses Saturday and we might actually fill an entire section of Beard-Eaves. The big crowd will give the scrappy Tigers a really good chance to get a 21 win season. Be there!

Oh and if you need some fuel to your hatred…here you go.

I think I can say with confidence that Lebo has definitely earned another year as AU’s head coach. I’m cautiously optimistic (as I am with everything AU related) that this team will do something special in the SEC tourney. What excites me the most is that both AU and UA played hard tonight. You can tell these guys really want to play. With determination like they have showed the past few weeks this team is bound to do something special, NCAA or NIT.