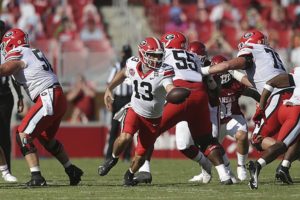 Can you call what they have history? One national title that is acknowledged by the NCAA. They have 13 SEC championships, but only three since 1983. What is this team, really? Seriously, playing in the SEC East that has been down for about 20 years now, they should be winning their sideof the conference more, but they don’t. And why not? Because they choke. That’s all Georgia is known for is choking.

SERIES HISTORY
This series has a streaky trend to it. One team does well for a while, the other will go on a streak of wins. Unfortunately, Georgia is on the longest streak between the two teams reaching back to winning 12 of the last 15 matchups. We all know Georgia fans deserve less, but the fact that they’ve won so much against us recently just adds unneeded misery. The fact the Georgia fans have a five game lead in the series and act like it’s a 50 game lead is annoying.

WHAT TO WATCH
It’s going to be hard for Auburn to win this one. Not only is Georgia one of the most talented teams in the nation, they’re also one of the hottest teams in the nation. For Auburn to sniff a chance, the defense cannot afford to start slow. Georgia may only need 14-17 points to win this game. Their defense is that good. Special teams will have to make a few plays, as well. Auburn has made a habit of putting an emphasis on Special Teams. Let’s be real, the odds are stacked against Auburn. But isn’t that when Auburn makes the most noise?

Cam Newton Sits Down with ESPN The Magazine