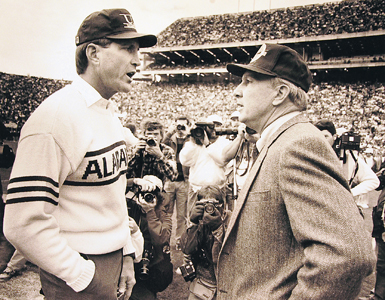 How I Remember It: Honestly, the only thing I remember about this game is the pep rally the day before. I remember going to the ‘Beat Bama’ parade, and my dad asking me what a certain sign said. It said “Beat Bama’s Butt”, and I thought it was so cool that I got to say “butt.” The parade ended at the baseball stadium where the pep rally was held. I remember standing outside the stadium, which was much smaller back then, and seeing Pat Dye talking on a stage that seemed to be around shortstop. I will remind you, this is a seven year old’s memory, so I could be way off, but that’s what I remember.

Anything that I remember from the game was seen on a video tape or YouTube. I know there were paper shakers, and I know there were so many that there was an orange and blue fog above the stadium from the particles released from the paper strands. I also know that Alabama didn’t have a chance.

What Really Happened: As we all know, this was the first Iron Bowl ever played at Auburn. Auburn came into the game with an 8-2 (5-2) record and was ranked #11 in the nation. Alabama was undefeated and ranked #2 nationally, so it wasn’t like the Tigers were guaranteed a win just because it was a special game in the history of the rivalry. Alabama wasn’t going to just lay down and let the Tigers pick up a sentimental win. They were playing for a national title.

Auburn took the opening drive 68 yards in 7 plays, including a 44-yard pass from Reggie Slack to Alexander Wright, and a 1-yard dive by James Joseph for a touchdown. Later in the quarter, after an Auburn fumble deep in Tiger territory, Alabama drove to the Auburn 15 yards to the 7-yard line, but was stopped and had to settle for a field goal.

Alabama would take the lead, following a Slack interception, with a methodical 13-play, 63-yard drive ending in an 18-yard touchdown pass in the second quarter. That would be the only scoring of the quarter, as the Tide took the 10-7 lead into halftime.

In the 3rd quarter, following a missed Tide field goal, Slack connected with Shayne Wadsden for a 58-yard gain to put the Tigers inside the Alabama 10-yard line. They would drive inside the 1-yard line before Joseph scored his second touchdown of the day with another dive over the pile.

Auburn would extend their lead to 7 on a drive that seemed promising, but after the Tigers were stopped at the 5-yard line, Win Lyle came on to kick a 22-yard field goal.

The 4th quarter would see the most points scored of any quarter, as Auburn took over the game. The Tigers would add a touchdown on their first possession of the quarter with an 11-yard run by “Lectron” Williams. The lead would be extended to 17 by another field goal that followed another Alabama interception.

Alabama would try to get back in the game by adding a touchdown and a field goal to bring the score to 27-20, but following the recovery of Alabama’s onside kick, Auburn drove down to the Alabama 17-yard line and kicked a field goal with 33 seconds remaining to bump the lead back up to 10 and solidify the win.

Why did I pick this game? At the time, there has never been a bigger game in Jordan-Hare history, and we thought there never would be.

Grown men cried, women wept, children like me had no idea what was going on, but just the idea that the Iron Bowl was in Auburn was huge for the program, huge for the fan-base, and huge for the rivalry. Of course the game was great as well. The Tigers beat the undefeated, #2 team in the nation that just happened to be Alabama.

This would have been much further down the list had the Tigers lost on that magical day, but the win just added on to what was already the greatest day in Auburn football history… at the time.

Fun Fact: The win was Auburn’s 4th straight over Alabama, and gave Auburn a share of the SEC title with Alabama and Tennessee.

Play of the Game: The final field goal ended up being unnecessary, but it sealed Auburn’s win and dominance over Alabama in the first Iron Bowl at Auburn.

Player of the Game: Alexander Wright had seven catches for 141 yards plus 54 kickoff return yards on two returns.

Quote of the Game: “I just didn’t think they could win here. I knew they wouldn’t win if we played as a team.” – Quentin Riggins

Podcast #3: All By Myself with Arkansas State, Targeting, Booing, and #StateHate