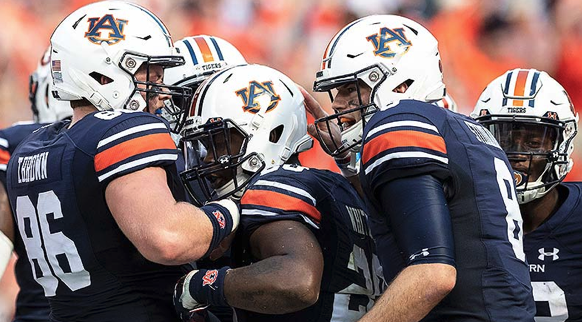 Say what you will about Alabama being without Tua, the Auburn Tigers still put up 48 points on the Alabama defense. Could they have scored more if Tua had been playing? Doubtful.

The Tigers won-out and proved that this season, they are simply the better team. Although they didn’t get to play for the SEC Titles, they got are going bowling in a big way and now they are listed as 7.5-point favorites in the Outback Bowl over the Minnesota Gophers.

So let’s see about getting your readers some quality, free football picks on the game against the No. 18 Minnesota Gophers on New Year’s Day.

A Couple of Fun Facts

This will be the first time that these two teams have ever met. The Tigers can’t look past this team – a team that doesn’t have a storied history of being an impressive football program. But the Gophers got some big wins. They beat No.10 Penn State, and only lost to a surging No. 8 Wisconsin and close one to the Iowa Hawkeyes who were ranked No.16 and Minnesota was No. 18. This has been an epic season for the Gophers. It’s the first year since 1905 that they have had a 10-win season, so you can bet that the Gophers are fired up and ready to play a big game against a tough Auburn team in Tampa, Florida.

P.J Fleck also won BIG10 Coach of the Year for taking the Gophers to their first 10-win season and the first 7 Big10 wins!

Auburn ranks No. 9 in both the AP Polls and the predictive power rankings. Minnesota is No. 16 in the AP but way back at No. 21 in the predictive power rankings. When we look at the offenses they show similar production. The Minnesota Gophers put up 34.33 points per game and the Auburn Tigers put up 34.00 even. Each team puts up a little over 420 yards of total offense per game, but through slightly different mediums.

The Tigers are extremely well balanced, putting up 210 through the air and 211 on the ground. The Minnesota Gophers throw a bit more, lending to 251 yards per game in the air and just 175 on the ground. Because of their proclivity to pass more, the Gophers average close to a yard per play more on average. But the Tigers get off over seven plays more per game, running a much faster-paced offense.

Although the Gophers have played some tough teams this season, their resume doesn’t match up to Auburn’s, so the stats have to be looked at like a moving calculus. Auburn beat Oregon and Alabama and had a tough battle that came down to a field goal with the No. 1 team in the country that at the time was averaging around 50 points per game – holding LSU to just 23.

Even though the stats are close, I believe the War Eagle will start to run away with it in the 3rd and 4th quarters. They have been battle-hardened in the SEC all season and will wear down the Minnesota Gophers… especially their offensive line. Although 7.5 points is a lot to give away. I see Auburn winning this one by 10 there will also be a lot more Auburn fans in attendance just because of the proximity.

Take the Auburn Tigers to win and cover the point spread in the Outback Bowl this New Years Day!

Tips and Tricks to Win At Sports Betting

How to Manage Your Budget While Playing in an Online Casino?

The History of Our Beloved Horse Racing

How to win in Darts?