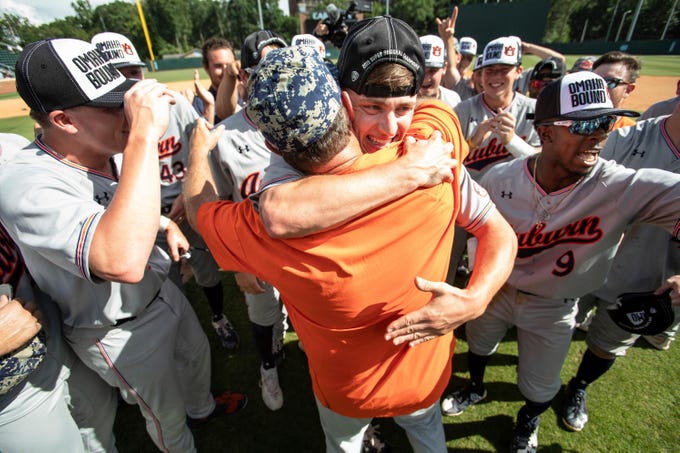 Happy Tuesday. I hope you’re as sick of the Peyton Manning Omaha jokes as I am. Just kidding, I love them. What a weekend. Relive the weekend and catch up on everything else here. Enjoy.

– The opener was stressful. Auburn needed late action to pull out the upset. Full highlights here.

– The bats completely disappeared in game two. If you’re too excited to work and need to temper your emotions, these highlights will help.

– Heading into game three, Auburn planned to start a freshman at pitcher. That changed just a few hours before gametime.

– The bats came back alive in game three. When I say they came alive, I mean they nearly made history. Relive all of the glory here. All those bats earned Auburn its first trip to Omaha since 1997.

– See everything the players and coaches said and how the internet reacted to the historic win. Also, watch the players come back to fans at 2:30 am.

– Auburn now heads to Omaha to face off against SEC rival Mississippi State on Sunday. Omaha can be confusing, so here’s how the format works and here’s a handy bracket so you can keep up.

– I agree with Football #EverythingSchool. But really, how good is it right now for Auburn Athletics?

– It was not only a good weekend for Auburn, but for the SEC in general.

– Speaking of Football, if you want to be angry and happy at the same time, see these projections. I don’t know how to feel anymore.

– Recruiting season is in full swing and the Tigers are gaining momentum. That includes a commitment for the most needy position group and a highly rated JUCO transfer.

– Also, if this isn’t the best football name out there I don’t know what it.

– We still don’t know who will replace Jarrett Stidham, but catch up with his NFL progress.

– In random coaching news, a former Auburn coach is getting the Butch Jones treatment.

– Bruce is always recruiting. Will he get a commitment from this 5-star?