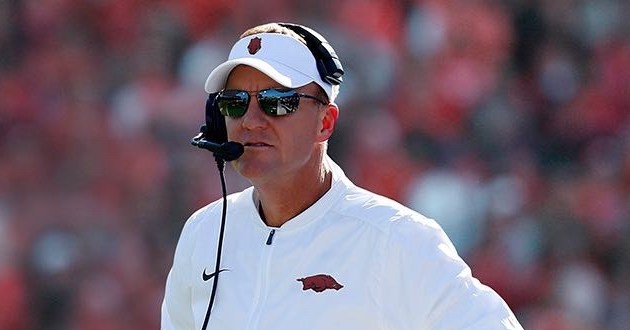 Flint Harris (@Flint_HolyTurf) is an Arkansas graduate that used to run and write for HolyTurf.com, a site all about the passion of college football, specifically the SEC and Big 12. Flint has been a staple of the Arkansas-themed Other Sidelines, and he’s never given me a reason to not invite him back. Flint is understandably a little down (again) this year, so let’s be nice to him.

We are so consumed with the mess that is Arkansas football, I’m not sure we have given much thought to Auburn. I did ask an Auburn fan last week if she would rather lose on the last play like the Tigers did to LSU or get blown out like Arkansas did against the Mean Green. We both agreed the last second loss Auburn endured was ‘better’ than the Arkansas debacle against UNT.

2. What are the thoughts on Chad Morris now? Do people understand or do they want him out already?

People are willing to be patient with Chad. It’s evident what a poor recruiter Bret really was. He got a few big recruits here and there, but once he signed his extension in 2015 his recruiting efforts dwindled. My biggest frustration so far has been the lack of intensity from the team. We just don’t play very hard.

The two returning QBs are not SEC caliber. The two freshmen are just that…freshman who didn’t even arrive in January, so they have only been here a few months.

Can I go with guys’ who are good and have awesome names? Okay, great! Big Kat Bryant already has two sacks this year and a pass break-up. JaTarvious Whitlow earned his keep last week with 104 tough yards against a feisty LSU defense after averaging almost nine yards a carry the week before.

5. Name two Razorbacks that Auburn fans should keep their eye on.

Let’s stick with cool names theme because true freshman LB Bumper Pool is off to a great start. He dons #16 on defense. His made several plays already with a blocked kick, three pass break-ups, and a 60-yard fumble return. Jordan Jones is a WR with fleet feet. He wears #10 and is a big-play threat averaging 21 yards a catch.

Arkansas’ offensive line is putrid. Through the two Auburn games I’ve watched, I’m not really sure where Arkansas has an advantage over Auburn…wait, of the head coaches wearing visors, Chad Morris does have a better hairline than Gus. Take that, Aubie!

Both teams are even in turnover margin through three games, Auburn is dead last in the SEC in penalties (no controversy there, right?), total offense numbers are pretty close…

8.What’s your prediction/analysis for the game?

I’m curious if Auburn sleepwalks through the first half with an LSU hangover. It will only affect those who bet the spread, currently Auburn -30 because you could play this game 100 times, and Auburn is winning all 100.

Arkansas will end up 2-10ish…gosh, it is painful to type that. You never think rock bottom is this low. I think we can beat Tulsa at home. Per the usual, the Auburn schedule is daunting and that was considering LSU as the fourth or fifth toughest game. I’d say 9-3 for Auburn, but what do I know.

Yes, but that is more of a compliment to Gus than a shot at Chad. Chad needs time, and people will be patient. It would be swell to show improvement moving forward this season. Like every other school, I want to keep an eye on how he uses the new redshirt rule this year.

beAU Knows: From Where I’m Sitting

Good stuff. We need a recovery game. I always look forward to reading this guy every year.