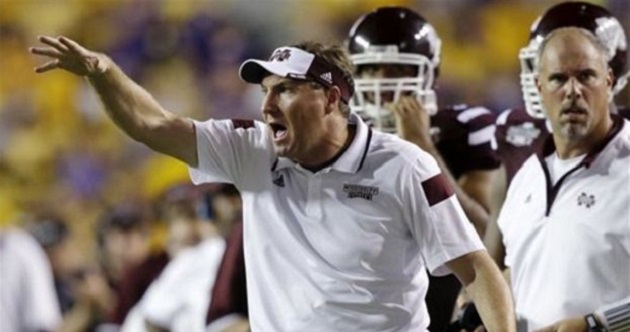 The fact that the Mississippi State Bulldogs suffered defeat to Auburn last time around may not have come as a surprise to many, however the manner of the loss will certainly have taken some supporters a while to come to terms with. On the Tigers first game on the road this season, they made themselves feel right at home in Starkville, in front of a capacity crowd at the Davis Wade Stadium. Auburn embarrassed the Bulldogs, going into the locker rooms at half time 35-0 up. It was the Tigers third straight victory, improving their year record to 4-2. However, what does the defeat mean for Mississippi State, and how will they recover from such a damaging home loss?

Despite the Bulldogs eventually making the scoreboard a little more respectable, losing by 38-14 at the end of the fourth quarter, Head Coach Dan Mullen certainly has his work cut out for him ahead of their next match up with BYU Cougars. The team failed to eclipse 100 yards of total offense until the latter stages of the third quarter, and didn’t even score until 5:48 remained in the quarter. Quarterback Nick Fitzgerald struggled after coming off the back of the greatest game of his career against UMass, where he threw for 305 yards and rushed for 110, and his off day certainly spread throughout the team.

The 35 points conceded in the first half was the most by MSU in the first half since 2006, giving the team little hope of producing a second half comeback. The Denver Broncos have been on the receiving end of the three heaviest half time leads in Super Bowl history, including the biggest winning margin victory record in 1990, however they still managed to win Super Bowl XXXII and XXXIII. Bulldog supporters and players alike will be hoping that they can produce a similar comeback in the coming weeks as they bid to regain their No.1 ranking.

The pressure is certainly mounting on Coach Mullen, with some within the game reporting that the former Florida Gators man wants out of Mississippi. The 44-year-old is certainly not justifying his $3 million annual salary at present, with another defeat to BYU this weekend only likely to increase the speculation regarding his job security. The fact that Mississippi State are allowing their opponents to complete 62 percent of their passes, as well as also giving up 237 passing yards per game, does not make for good reading for supporters, and the writing may well already be on the wall.

Everything Else from the ‘Blogler’s Trip to L.A. – Part 2

Wear your BLUE this Saturday

What’s To Expect from Auburn Baseball in 2019?